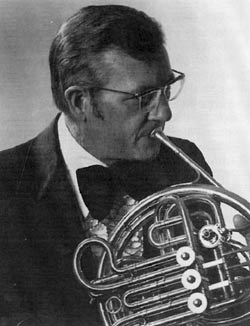 Wayne Barrington was an impeccable musician and hornist, and a tireless teacher who expected nothing but the finest from his students but who, in return, was dedicated to their success. His playing career took him to the Chicago Symphony and Los Angeles Philharmonic, and he taught at the University of Texas in Austin for 34 years. He died in Austin in 2011 after a long illness.

Wayne was born in 1924 in Schenectady NY and brought up in Detroit and Worcester MA. His mother was an amateur pianist and his father studied horn in Detroit with Albert Stagliano, principal horn in Detroit and later the first principal horn of the NBC Symphony. In Massachusetts, his father changed to bassoon, but his mother took up horn and studied with Walter MacDonald, second horn in the Boston Symphony. In 1939, when students were needed at New England Conservatory, his mother was given free tuition to perform in the orchestra and study with Willem Valkenier, principal horn of the BSO. The family often invited other musicians to the house for evenings of chamber music.

Wayne began studying at New England Conservatory with Valkenier in 1942, but the next year he was drafted into the Army, where he played in a band that was based in Germany and France. He returned in 1946, studied with Walter MacDonald, was a student at Tanglewood during the summer, and went back to NEC in the fall. He played principal horn in an orchestra conducted by Arthur Fiedler for broadcasts when the BSO was out of town, and in shows on their way to Broadway; during this time he assisted Arthur Goldstein with the humorous Schmutzig method book.

Wayne returned to Tanglewood in the summers of 1947 and 1949, then took a job in San Antonio, but after only one season was called up to serve in Korea. He ended up playing in the band at General MacArthur's headquarters in Tokyo, including the farewell ceremony when President Truman fired MacArthur.

Wayne returned from the service in 1951 and won a position as second horn in Pittsburgh, where over the next three years the orchestra made a number of recordings under William Steinberg for Capitol Records. He also played the spring Pops season in Boston. Then he auditioned for Fritz Reiner, the new conductor in Chicago, and a few months later was offered the third horn position. The section included Philip Farkas, Joe Mourek, and Clyde Wedgewood, with Louis Stout and David Krehbiel as assistants. He also played in the Chicago Symphony Brass Ensemble with Bud Herseth, Renold Schilke, Frank Crisafulli, and Arnold Jacobs, an ensemble often cited as highly influential in establishing the brass quintet as a standard format for brass chamber music. He taught at DePaul University and at home.

After ten years in Chicago, Wayne looked for a better climate because of his wife's illness. Zubin Mehta hired him as associate principal horn in the Los Angeles Philharmonic, and he also played in the Los Angeles Brass Quintet. After two years, when his wife had died, Wayne found a position at the University of Texas in Austin, where he taught from 1966 to 2000, also playing in the faculty woodwind quintet, the Solar Winds, and in the Austin Symphony (1966-1988).

When asked about his pedagogical techniques, Wayne responded that although he had never discussed playing or teaching the horn with Philip Farkas, they shared many concepts and solutions to horn playing problems. He believes that music is a unique profession where competition is put aside in favor of cooperation. In retirement, Wayne has pursued publication of excerpt books and encouraged chamber music in Texas.

Wayne received the Punto Award at the IHS workshop in Denton TX in 1991. A tribute appears in the August 2001 issue of The Horn Call.