*A fully footnoted version of this article may be found in The Horn Call: pdf Volume XXIX, No. 3, May 1999

Premiere performances of soon-to-be-recognized masterpieces often gather about them a body of legend colored by hindsight and more than a little wishful thinking. After its first performance on May 7, 1824, Beethoven's Ninth Symphony soon became the subject of many such reminiscences and reports.

By the end of the nineteenth century, the fourth horn solo in the third movement of the Ninth had developed its own lore. As Richard Hofmann recounted in his 1893 Praktische Instrumentationslehre:

Biking Across North America With a Horn

I am what you would call an "advanced amateur," meaning that if I clam, I still have my day job. I play first horn in an excellent community orchestra, in Keene, New Hampshire, where we perform for a loyal and enthusiastic audience, in a refurbished theater with a flashing marquee.

It's a great gig. My colleagues in the orchestra are witty and serious; those qualities produce both warm-hearted laughter and inspired music-making. Sometimes in rehearsal I pray a thanks to God for the gift of music and for the opportunity to play.

I wasn't always an advanced amateur. When I started on the horn again in my late twenties, after a fifteen year hiatus, I was just plain bad. The only prayers of thanksgiving in those days came from my neighbors--when I was done with my daily half-hour honk. Still, I improved, and with lessons I improved even faster. Therefore, when I decided I wanted to ride my bicycle across the United States from the Pacific Ocean to the Atlantic, I also decided that I would need to take my horn. I was determined not to lose any ground in my quest to be a good horn player, and I felt that two months without playing would be too long. The horn would come with me on the bike.

閱讀全文: Biking Across North America With a Horn

Birth of the Gliere Concerto

Reinhold Gliere was a modest, reserved, and refined person. No carelessness either in his clothes or in his manners. Thick eyebrows. A tender and friendly look in expressive brown eyes, lips ready for a smile.

By 1951, the year in which Gliere wrote his concerto, I had already been a performer for ten years. I started in March 1941 after I won a prize at the Moscow competition, and, though still a student at the Moscow Conservatory, I dreamt of playing solo and performing in concerts. In the Moscow competition, I played Variations Brillantes by Henry Gottwald and Les Dernieres Pensées by Weber. I had the full command of a virtuoso and was able to play with sounds as I liked, but my colleagues reproached me for insufficient care for the beauty of the sound. Because I wanted to become a solo performer, I had to learn how to sing on the horn. So I began taking vocal lessons. I mastered bel canto and strong breath, and then applied all that to the horn. I was awarded first prize at the 1949 International Competition in Budapest. By that time I had a fairly broad repertoire, but today it seems to have been just a prelude to a great composition--that superb concerto which Gliere wrote for the horn.

閱讀全文: Birth of the Gliere Concerto

It's Never Too Late

by Kerry Geddes and Kieg Garvin

I am an amateur musician whose musical experience prior to February 1996 had amounted to two years of piano lessons as a child, twenty-one years of amateur choral singing, and a university music degree in which my 'instrument' was the voice.

In those days, singing was my musical passion, but I had often contemplated the idea of playing some type of brass instrument. There were various amateur choirs, both university-based and others, which anyone with limited vocal experience could join, in order to ease themselves into a satisfying and ultimately rewarding musical activity, and this was the way I started. However there were no equivalents that I knew of in the instrumental field. As we all know, normally an instrumental musician must be of a satisfactory proficiency level before having any hope of joining an orchestra or other ensemble.

Realistically then, as a mature adult I could not see myself becoming proficient enough with an instrument to be able to successfully audition for a position in any skilled ensemble, so I never acted upon my instrumental contemplations. Then in 1996, a friend who was the musical director at a local high school, in an attempt to encourage me further, gave me the chance to try out some of the school's brass instruments on my own. I was initially apprehensive about his suggestion to try the horn, because I had heard that it was a difficult instrument to learn, but I had always loved its sound, so when I was shown the rudiments of how to blow it and actually managed to produce a tentative C major scale, I was well on the way to becoming hooked.

閱讀全文: It's Never Too Late 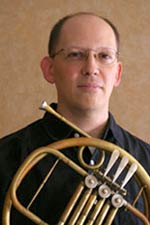 I have long been fascinated by older sources of information because they often give a clear view into the past as seen from the perspective of people who were actually experiencing that place and time. In looking into the transition from the natural horn to the valved horn I came across several fascinating commentaries on the horn from late nineteenth- and early twentieth-century England. In short, more than a few musicians in this period "trashed" the valved horn, strongly favoring the then little-used natural horn. Many of these opinions appear in journal articles, orchestration books, and, especially in England, transcripts of various forums and association meetings. I have included several here that give us a series of "snapshots" of opinions in circulation at this time, covering 1879-1922. While the comments which follow sometimes seem quite humorous from today's perspective, they do reveal much about horn playing around the turn of the century and, reaching deeper, they say something about music perception and acculturation and at the same time raise interesting reasons as to both why some composers continued to write for the natural horn in this period and why natural horn performance is still important today.

Music perception is a relatively new area of study in music, generally relating to how we hear or perceive music and sounds. For purposes of this article, acculturation will be understood as that aspect of music perception which is conditioned by individual experiences. An example that is easily grasped by horn players of what music perception and acculturation can involve may be found in the use of fingerings on the double horn today. Some hornists can distinguish the sound of a hornist playing into the lower and middle registers on the B-flat side of the double horn very easily. American horn player and teacher James Chambers (1920-1989, principal hornist of the New York Philharmonic from 1946-1969) commented in a 1982 interview that "I am constantly surprising students by telling them, without looking, that they are playing on the B-flat horn and that it really would be better if they would consider playing it on the F horn. ... the F horn sound is preferable." As Chambers implied, other hornists seem unable to perceive the differences in tonal color between fingerings, which Chambers found so obvious, while still other hornists who can perceive the difference find the tone of the B-flat horn superior to that of the F horn. Curiously, non-horn players, and especially non-musicians, are often hard pressed to note any significant difference at all in tonal color between any fingerings on the double horn.