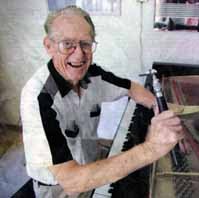 Don Peterson played in the Utah Symphony for 49 years (as principal for 43 years), taught at local schools and universities, and eventually turned to piano tuning. He attributes his ability in piano tuning to his years of playing the horn. "Each note is made with a different embouchure, so you have to hear the note before it is played," he said. "Piano tuning came naturally to me."

Don was born in 1926 and started performing with the Utah Symphony when he was a senior at Provo High School. He was in the US Army for a time, joining in 1943, but the war ended before he could be sent overseas.

Don attended Brigham Young University and the University of Utah and taught at both universities and at Mr. Olympus Junior High in Salt Lake City while continuing to play with the symphony. He traveled with the symphony. "We traveled all over Europe and in all but two countries in South America," he said. "We were the first to play in the new Abravanel Hall, the home of the Utah Symphony in Salt Lake City."

Don learned piano tuning through the Piano Technicians Guild, is a Registered Piano Technician, and has been tuning pianos for over 30 years. He tunes over a hundred pianos for the LDS Church, twice a year. He is also a licensed private pilot, keeping up his license even at age 83.

Don was honored with the Punto award at the 1987 International Horn Symposium at Brigham Young University in Provo UT.