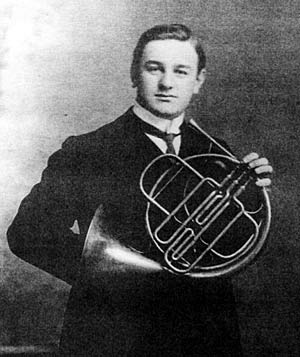 Alfred Edwin Brain, Jr., son of A.E. Brain Sr., brother of Aubrey Brain, and uncle of Dennis Brain – all distinguished horn players – immigrated to the US and influenced horn playing in Los Angeles.

Alfred (known as Alf) started to learn the trumpet when he was six, but changed to the horn at age 12 and studied with his father. He (and his brother Aubrey) studied with Friedrich Adolf Borsdorf at the Royal Academy of Music. Alf was first horn with the Scottish Orchestra in Glasgow for three years, during which time he married Gertrude Levi (1907). Returning to London, Alf became principal horn of the Queen's Hall Orchestra under Sir Henry Wood. He and his section gave the first British performance of the Schumann Konzertstück in 1909, and he an Fred Salkeld gave the first London performance of the Beethoven Sextet for two horns and strings.

Alf became the most sought-after horn player in London and took over as principal horn of the Royal Philharmonic Society in 1913 when Borsdorf retired. He was injured during World War I at the French front and received the British War Medal and Victory Medal, finally being discharge in 1919 and returning to London. He soon had a monopoly of the first horn chairs of the leading orchestras.

Alf was not happy in his marriage, so he emigrated in 1922 with his daughter, Olga, to the United States to join the New York Symphony under Walter Damrosch. Conductor Walter Rothwell heard Alf play and in 1923 invited him to become principal horn of the Los Angeles Philharmonic, where he stayed for 15 years. Artur Rodińkski asked Alf to be principal horn in Cleveland; Alf stayed with the LAPO but occasionally commuted to Cleveland. He married Straussie Sherrand in 1932; they were married for 34 years.

Film sound tracks were being developed when Alf arrived in LA, and he began to play at MGM in 1927. He can be heard in many films, including Ben Hur and King Kong. His influence in LA was incredible; although he did not like giving lessons, horn players would go to him for "consultation lessons." One of his students was Vincent DeRosa. He was the first call player for recording sessions; if Alf were available, no one else was considered. Alf left the Philharmonic at age 60 to become a full-time studio session player, "the father of studio playing" according to James Thatcher.

Alf was a natural player and a powerful player whose sound projected. He arrived in LA playing on a piston-valve Courtois F horn with a small mouthpiece. He later played a rotary-valve Schmidt F horn and eventually a five-valve Alexander B-flat/A. Like Dennis, he had a strong jaw and small, even teeth and used quite a bit of mouthpiece pressure. His phrasing was much admired and attributed to his having sung as a boy in a church choir. He was a master of the soft attack.

Alf was famous as a host, and gave large parties, cooking all the food himself. His nephews, Dennis and Leonard, visited while on tour with the RAF orchestra in 1945. Horn players from the LA Philharmonic and others from the LA area were present at a party for his nephews and others from the RAF. It was during this visit that Alf gave Dennis a horn mouthpiece that Dennis used for the rest of his life.

Alf was out-going and had a great sense of humor, telling stories, making up limericks, and playing practical jokes. He would climb up on the roof of his house to play the Siegfried horn call to greet his guests. He was also generous, always helped young horn players, and never spoke ill of others. He asked the film score orchestrators to write for eight or more horns to provide more work. When the Los Angeles Horn Club was formed in 1951, the members unanimously elected Alf as the first president.

Leighton Jones wrote "Alfred Edwin Brain (1885-1966): A Forgotten British Horn Virtuoso?" in the October 2004 issue of The Horn Call.
This website uses cookies to enhance user experience, including login status. By using the site you are accepting the use of cookies.
Ok