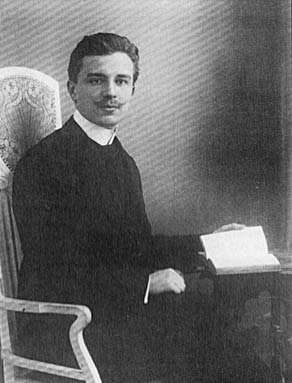 Bruno Jaenicke came from the tradition of horn players born and trained in Germany and other European countries who emigrated to the United States and filled positions in major orchestras, often under music directors also from Europe. Jaenicke was principal horn in Boston, Detroit, and New York and was considered to be one of the finest hornists of his time.

Jaenicke was born in Dessau, Germany in 1887 and studied at the Sondershausen Conservatory in Dessau. He soon was playing extra for the Court Orchestra. He served in a military band in Stuttgart, then joined the theatre orchestra in Coblenz (1908-1809) and the summer season in the resort orchestra at Baden near Zurich in 1910. Next was principal horn (1910-1911) in Freiburg/Brisgavia (where Ifor James later taught), then principal horn of the Royal Chapel in Wiesbaden, where he succeeded Gustav Schulze and married Schultze's daughter.

It was while Jaenicke participated in the Munich Opera Wagner Festival as additional solo horn that he received a telegram from conductor Karl Muck inviting him to take a position of principal horn in the Boston Symphony Orchestra immediately if he could resolve his regular season contract with the Royal Chapel in Wiesbaden. Jaenicke was able to call on Joseph Himmer from Zurich to take over his contract, and he played for the BSO from 1913 to 1919.

After two hears with the Detroit Symphony (1919-1921), Jaenicke became co-principal with Franz Xaver Reiter with the New York Philharmonic, then principal from 1922 to 1943. He can be heard on a recording of Strauss's Ein Heldenleben under Willem Mengelberg. Jaenicke's two brothers-in-law, Robert and Adolph Schulze, played second and fourth horn with him in New York.

Jaenicke wrote a monograph called "The Horn" for a New York magazine. This entertaining article was reprinted in The Horn Call in November 1971 and again in August 2000. Here is a brief excerpt about the development of the double horn.

The success of this invention was complete, although not quite as easy as a conductor whom I know thinks. Let me tell you about him. One nice day, I played for him in order to get a position as first horn in his orchestra. I played the F horn then. He accepted me, advising me to use the double horn of which he had heard, "because," he said, "it is so easy. When you want a high note, you just press a button and there it is." The good man did not know that we have to set our lips in the same position when we play the high C on the F or the B-flat horn.

Hans Pizka wrote about Jaenicke in the November 1994 issue of The Horn Call.