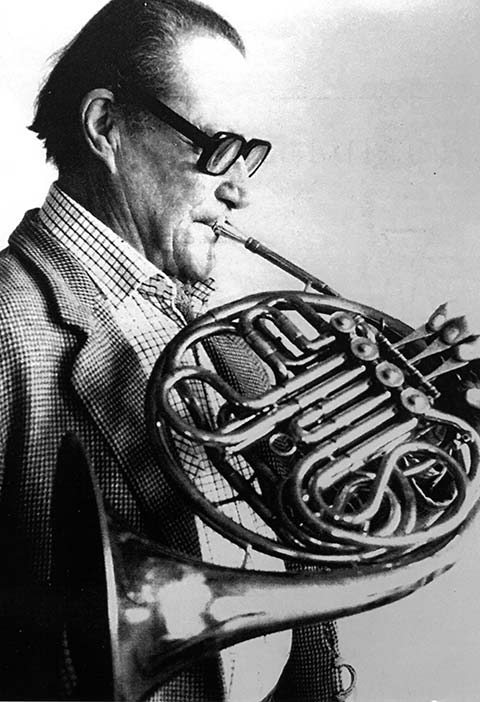 Farquharson Alfred Mackay Cousins ‒ “Farkie” to everyone ‒ was a true horn legend and character who achieved lasting fame as a devotee of “the true horn tone.”

Farkie was born in Bristol, England in 1917 to an Anglican clergyman, Alfred Edmund Cousins, who served in France in the First World War, and Margaret Mackay, a Canadian. The parents met in Canada where Alfred was working as a priest; Farkie spent some early years in Canada.

I saw my first horn when I was four years of age in Winnipeg, Manitoba, in Canada, where we were living for a while. Dad took me to a Military Band outdoor concert. It was The Band of The Welsh Guards touring Canada and I clearly remember them playing Franz von Suppe’s overture Light Cavalry. Little could I have imagined that the Sergeant playing first Horn would, in fifteen years’ time, be my second Horn in the same Band!

Farkie attended Clifton College, a boys’ public school in Bristol, England from 1931-36, where he decided to take up the horn at age 15. This was a school-owned piston valve instrument with an F crook that was hanging on a wall; he tried it, producing a G below the stave immediately! After three years he won a prize playing Glazunov’s Reverie. His father bought him a similar-type Raoux horn and, for the rest of his life, Farkie stayed passionately loyal to the narrow bore piston valve French horn in F.

Farkie attended Selwyn College, Cambridge to read Music, graduating in 1938 and deciding to become a professional horn player. With the help of a scholarship, he went to the Guildhall School of Music in London in 1939 to study with Bertie Muskett, one-time principal horn for Sir Thomas Beecham’s New Symphony Orchestra. During the months leading up to the Second World War in September 1939, he was also able to have lessons with Aubrey Brain at the Royal Academy of Music. Some of his contemporary horn students with Aubrey Brain were Aubrey's son Dennis, Douglas Moore, William Grant, and John Burden, all of whom later had distinguished careers as first horns and teachers of the next generation.

In 1992, aged 75, I recall, over half a century ago I sat alongside Dennis Brain in The Duke’s Hall at the RAM, with Sir Henry Wood conducting. Halcyon days, with Aubrey as our mentor. We all played French horns in F, the large bore B-flat German horn had yet to dominate, and with Aubrey Brain – never!!

On the outbreak of hostilities, Farkie joined the same Welsh Guards Band he heard as a child in Winnipeg. He also played in the Orchestra in Khaki, a group of military musicians formed to make aluminium records for relay to the Forces abroad. When he was demobilized in 1945, he bought a Joseph Lucien Raoux horn in F.

He joined the BBC Symphony Orchestra for the 1945-46 season, the City of Birmingham Orchestra in 1946-47, and the now defunct Yorkshire Symphony Orchestra based in Leeds in 1948-49, the last horn section in the UK to play the narrow bore piston valve French Horn in F. The section was Farkie, Raymond Few, William Crosse, and Walter Smith.

From Leeds, Farkie moved in 1949 to Glasgow with the Scottish Orchestra. He now realised that there was no choice but to give up the old narrow bore piston horn and so played an old Lehmann compensating horn in F and B-flat owned by the orchestra. He stayed the renamed Scottish National Orchestra for the next 10 years, during which he bought a yellow brass Conn 6D full double instrument. The section in the early 1950s was Farkie, Aileen Way, a young Barry Tuckwell, and Derek Lisney. Farkie also taught at the Royal Scottish Academy of Music. He then was solo horn in the BBC Scottish Orchestra, also in Glasgow, from 1960 to 1966, with ex-horn player Normal Del Mar as the Principal Conductor.

In 1969 he joined first the Cape Town Symphony Orchestra in South Africa as principal horn and then the SA Navy Band, playing horn, BBflat tuba, and a lot of golf, before moving finally to the Army Band as Music Librarian. He retired in 1991, returning to the UK to write novels and play more golf.

His classic tutor, On Playing The Horn, first published in 1983 and revised and expanded in 1992, is an absolute must for all horn players. He describes, with humour, wisdom, and long experience, the many qualities that make up a horn player’s character, playing technique, and how to survive as an orchestral musician.

Never forget that the most beautiful note in the world can become a disaster, unless it is played in the right place. F.C.

This great man, fine horn player, teacher, author of murder mystery books, cartoonist, writer of articles to music magazines eulogising the narrow bore horn and bemoaning the “cow horn German thing,” believer in a pure, clean, and open tone on the horn, raconteur, lover of fine malt whisky and poker, highly intelligent, a true bon viveur with a twinkly-eyed sense of humour, sometime tuba player and passionate golfer, left us three months after his 100th birthday. We will all miss him, as they don’t make these larger than life characters any more.