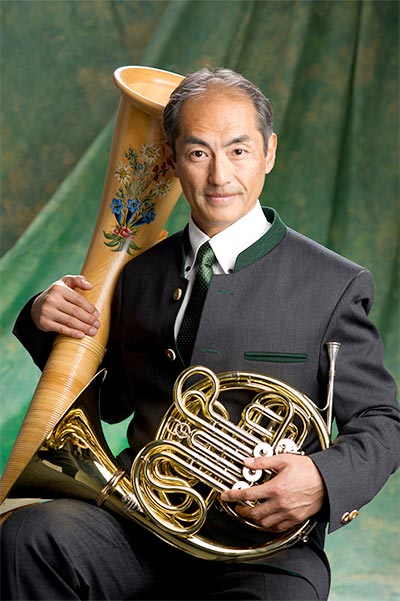 Nozomu Segawa’s service to the IHS has been significant in bridging gaps, especially language, with Japan and Asia in general during his two terms on the IHS Advisory Council (2006-2012) and since. He has participated in 16 IHS symposiums, often directing the Japan Horn Society horn ensemble, including in 2019 in Ghent. He has been executive director of the society for more than two decades.

Nozomu is a freelance horn player in Japan and professor at the Nippon Sport Science University. He teaches rhythm for athletes, including Olympic medalists. His dissertation “Effects of horn performance during outdoor education toward campers” (2013) was written from alphorn, conch, and hunting horn experience at the university’s annual summer camp and skiing camp. He also conducted research on the relationship between Intra-Oral Pressure and Flow-Velocity in Horn Playing (2003).

Nozomu earned diplomas in horn with Kozo Moriyama at the University of Fine Arts and Music in Tokyo and with Otto Schmitz at the Hochschule fuer Musik in Munich. He was a contract member of the Orchestra of the Beethovenhalle and a member of the Classical Philharmonic, both in Bonn. He has translated (German to Japanese) masterclasses by teachers such as Peter Damm, Frøydis Ree Wekre, and Radovan Vlatković. He conducts junior, university, and city orchestras, represents the ensemble Chocolat Virtuoso Japan, and is a member of the horn/alphorn quartet Ensemble Forest.