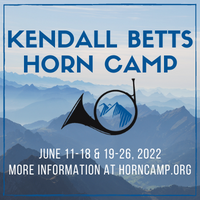 The well-established Romantic Brass Symposia in Bern present current research on brass instruments, concentrating on music of the long 19th century (1789–1914). After conferences on the keyed trumpet and the ophicleide, French horns, the materiality of brass instruments, the saxhorn, the conservation of historical brass instruments, and the trombone and acoustics, this sixth edition is open to all brass- related topics, highlighting interaction of brass instruments with their musical contexts. It is held in collaboration with the Historic Brass Society. Keynote addresses will be given by Sandy Coffin, Ignace De Keyser, Trevor Herbert, Sabine Klaus, Arnold Myers, and Anneke Scott.

We call for papers, lecture recitals and concerts with spoken commentary on all topics of brass instruments of the long 19th century, including historically informed performance, style, repertoire, history, and instruments. We expect that presentations will be given live and in person. The official language for the conference is English.

Papers and lecture recitals should be no longer than 20 minutes (followed by 10 minutes for discussion); shorter presentations (10’ + 5’ discussion) are equally welcome. Concerts should not exceed 45 minutes. (Details of keyboard instruments will be available on the website).

Please mail submissions to daniel.allenbach@hkb.bfh.ch by 30 September. Proposals should be in English (c. 400 words), describing the topic and including the following:

All presenters must register for the conference.

The symposium website is www.hkb-interpretation.ch/rbic. All information on program, fees and accommodation will be published there. 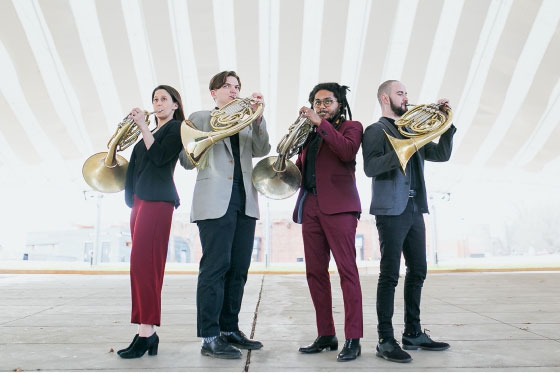 Since its founding in 2017, Metropolitan Horn Authority has been the premier contemporary horn ensemble in New York City. MHA members include Peter DelGrosso (founder), Blair Hamrick (Contemporaneous, eGALitarian), Ser Konvalin (The Orchestra Now), and Kevin Newton (Imani Winds). The group was formed to highlight the horn quartet largely through original music performed in conventional and unconventional venues. The impetus for this ensemble gained momentum when MHA won the Metropolitan Transit Authority Arts & Design’s “Music Under New York” competition, performing at Rikers Island, and then being featured soloists with The Yonkers Philharmonic—all within their first year. While continuing to perform as a horn quartet, Metropolitan Horn Authority has expanded the ensemble to include electric guitar, bass, and drums. This unique septet performs original arrangements and compositions to rave reviews at live music venues such as Rockwood Music Hall and DROM. Earlier this year, MHA completed a successful tour through Virginia that included educational outreach concerts and a masterclass and recital at Virginia Commonwealth University. Currently, Metropolitan Horn Authority is preparing for an Educational Residency at the Pierrot Chamber Music Festival beginning on July 21, 2022. Look out for more recordings and future tour dates. Metropolitan Horn Authority is bringing the horn to everyone!

Mexican Music for Horn at IHS 54

The Río Bravo Horn Quartet is a group of professional hornists who together have a combined 107 years playing in Mexican orchestras, and we have joined to present Mexican music for the horn at the IHS 54 Symposium. Mexico has a long history of classical music and many full-time professional ensembles. When I arrived in Mexico in 1985, the hornists were almost all foreigners, but the horn has become much more popular for nationals in the last few years.

We are excited to share new recital music with the IHS. 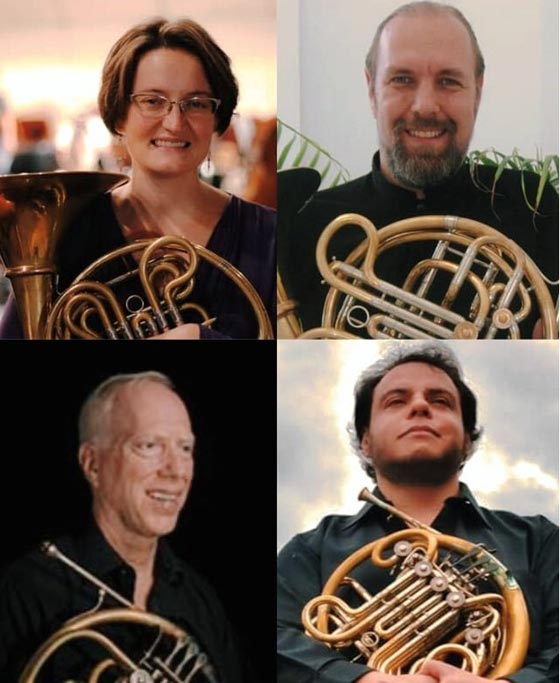 IHS 54 host Jennifer Sholtis contacted us about organizing participation from Mexico for the Symposium. Claire and I first talked about playing pieces for horn and piano. Then she suggested adding some friends to play the Chavez quartet. I didn’t know the work, but soon we had developed an entire Mexican-themed program.

Our recital will open with Jonathan performing the Rapsodia Bambuco No. 3, op. 6 no. 2, by the Colombian/Mexican composer and hornist Gabriel Soto Mendez who is best known as the arranger of Bésame Mucho as recorded by the Berlin Philharmonic horns.

Claire continues with the premiere of Scherzo for Horn and Piano by the Guanajuato composer Javier Compeán, whose music has been performed in Italy, Germany, Russia, Spain, France and throughout Latin America.

I will conclude the first half with En el único lugar, a Brazilian inspired piece by the jazz pianist and composer Edgar Dorantes.

The second half of the program will open with the Sonata for 4 Horns by Carlos Chavez. This challenging quartet was written in 1929 and is now out of print, so Jonathan generated parts from an old photocopy of the score. The work was very difficult for the first horn before the use of descants and triple horns, and Chavez later made a simpler version for 4 horns and orchestra in which he gave some of tricky horn lines to the woodwinds. It is an excellent quartet and deserves to be played more often.

To complete the program, we asked our friend Alfonso Cosme, co-principal horn in the Orquesta Filarmónica del Estado de Querétaro, to arrange 3 traditional Mexican songs for us. Knowing the full potential of the horn, Poncho wrote demanding versions of Malagueña Salerosa (as recorded by the Austin band Chingón), La Llorona and the Oaxacan tune Pinotepa.

We are thrilled to be able to share the rich musical culture of Mexico, and we hope to see many of you in Kingsville. 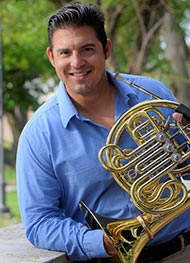 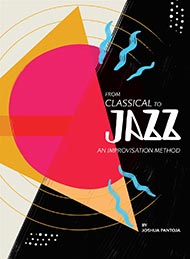