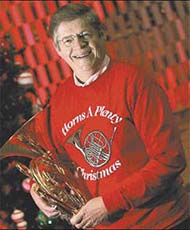 HAPC started about 15 years ago. Before that, we just had some horn players showing up to play Christmas music for 5 years. We started in downtown Appleton at a shopping mall with a three-story open area. The first few years, we had maybe 8-12 horn players perform and were supplemented by the Lawrence Conservatory horn studio (with James De Corsey.) He provided master classes for a few of my students, and then Bruce Atwell from the UW-Oshkosh horn faculty joined us for more classes. Bruce and I discussed making our own book, so he did that - we performed out of it for a couple years. The second time we were in Milwaukee, I asked Cynthia Carr to come and do a master class. She said that since we had no Jewish music, she wanted to redo the book and add some additional selections. Our first out-of-the-area guest was Jeff Nelsen. A couple years later, Geof Winter came to town with more performances and classes for my studio. He also arranged a version of the Cherry Tree Carol that is a favorite with our horn players.

A major revelation happened in the early 2000’s. I had contributed a personal check to a graduating senior horn student from the Fox Valley Youth Orchestra when the board invited me to come to a meeting to discuss something. The Youth Orchestra board said I could no longer make a contribution to a graduating horn senior: I could continue the fund, but they would decide which graduating musician would get the scholarship. I thought that since the entire horn section came from my horn studio, I could decide who would receive the money. That year (about 15 years ago) I decided to change how things were happening…thus Hornsaplentychristmas was born. We also did some HAPC events in the afternoon at the downtown mall, and then we all went over to the new Performing Arts Center to perform on the huge balcony for the audience waiting to watch the Nutcracker. I had done a little research about Guinness records and did not find any about horns, so in 2007 we had 85 horns plus myself to set a Guinness record.

Every year since Jeff and Geof, I have had guest hornists come to Appleton for solo performances and master classes. We would have a free-will offering that would be about enough to pay a horn scholarship for one student. I contacted a printing company about making some brochures and a web site that a former student James Saunders put together for me (Hornsaplentychristmas.com). Then when Facebook came about, Austin Larson thought it would be a good idea to promote HAPC there.

In the summer of 2009, I was mowing the lawn, and my wife Nancy came out with a phone in her hand, saying someone wanted to speak to me. The manager of the Marcus Performing Arts center in Milwaukee (home of the Milwaukee Symphony) was on the phone. He wanted to know if HAPC was anything like Tuba Christmas - I said, well, we provide about an hour of Christmas music. I contacted the Milwaukee Symphony to see if the horn section would like to join us. They did. The local Milwaukee newspaper did a large spread for us about HAPC. Since all of our concerts are free, I asked the audience about making a free-will contribution with the money going to a high school graduating senior. We had over 750 people in the audience, and the total contribution was enough for quite a few scholarships in the end. Another horn teacher by the name of Kathryn Krubsack in the Milwaukee area suggested we try to break our Guinness world record. We ended up with 94+ horns on stage, but the paperwork did not get in right so the record was not changed. Afterwards, a few people saw some postings on Facebook and asked about HAPC in their community. Michael Stanley, who lived in Washington DC, had been to WI as a guest conductor and horn performer. He was going to put us in a museum in the DC area. In the meantime, however, a huge rainstorm wrecked that museum, so we ended up in a hotel on the Potomac. They thought we would be too loud for an Oscar Mayer dance competition, so they moved us to an ice skating arena. We performed for many parents who were in the arena to hear us.

When Austin Larson went to study at the Cincinnati Conservatory of Music, he thought it would be great to have a HAPC event there. As a result, we ended up doing 3-4 events in Cincinnati. Since then we have had concerts from Washington DC to Los Angeles in this past year alone. Our concerts are all free - I try to attend 2-3 events a year. We now sell HAPC shirts, registration buttons, HAPC books (conductor scores and parts,) wooden Hornaments, and HAPC bags. When I attend HAPC events, I pay all the expenses out of my horn studio lesson funds. I want all monies after expenses of making shirts-buttons-bags-books to go into the scholarship fund. Horn scholarships around $5,000 go to many different high school horn students (the only ones eligible.) The most memorable event other than the Guinness record would be the Hornucopia event at Colonial Church of Edina, Minnesota. Major symphony horn performers from around the country came to Twin Cities, Minnesota, in support of the Minnesota Orchestra that was in contract negotiations for almost a year. Ellen Dinwiddie Smith contacted me about doing a joint event with HAPC and the guest horns. Hornucopia- Hornsaplentychristmas 2014 was by far the most complete concert. During the 2016 HAPC season, we will award a special scholarship: one horn student will be chosen as the recipient from the event with the highest number of participants.To donate to HAPC, please visit http://www.hornsaplentychristmas.com/support.htm