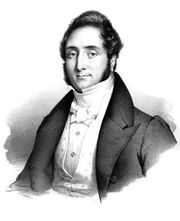 Jacques François Gallay was the last great natural horn specialist in France, renowned for his quality of tone in both open and stopped notes, his certainty of attack and clarity in rapid passages.

He was born in Perpignan, France, the son of Marie Bertin and amateur horn player François Gallay. At age 10, he began to study solfège, the traditional French system for improving aural skills and sight-reading, and two years later he started horn lessons with his father, though he was largely self-taught. When Gallay was just 14, and the horn player at the Perpignan’s theatre went sick, he was already sufficiently skilled to be able to stand in for him. Musicians visiting the city recommended that he should move to Paris to study at the Conservatoire, but his father was reluctant to let him leave home.

Galley composed and performed a horn concerto around 1818  and finally, in June 1820, at the age of 24, he went to Paris to meet Louis-François Dauprat, the Conservatoire’s horn professor. Though Dauprat was keen that Gallay should study with him, special dispensation had to be obtained before he could be accepted at the Conservatoire because he was above the maximum age for starting there.

In 1821, after just a year under Dauprat’s tuition, Gallay won the coveted first prize for horn in the Conservatoire’s annual Concours, the competition to find the best player on each instrument there. Clearly, he was already regarded as someone special. He performed in the prize-winners’ concert in December, and a review said that though the piece he played was “rather feeble,” he managed to play his “rebellious instrument” with the facility of a flute. Three months later, after a performance of a Nocturne for horn and harp, Le Miroir des spectacles declared that his tone was beautiful, his playing sang sweetly, and the impression he made enhanced an already brilliant reputation. “Soon,” the author continued, he will earn a place “among the great masters.”

Gallay played in the orchestra at Paris’s Odéon Theatre for a short while, but in 1825 he moved to the Théâtre Italien as solo horn player, and it was there that he met Gioacchino Rossini, who dedicated his Introduction, Andante and Allegro for horn and piano to him. He was also appointed to the band of the Royal Chapel, and though this ended abruptly with the overthrow of Charles X in the so-called July Revolution of 1830, in 1832 he was appointed to the chamber music ensemble of Charles’s successor, King Louis-Phillippe. The excellent notices for his solo playing continued. In 1833, after a performance of one of his own compositions, Castil Blaze, the music critic for L’Europe Littéraire wrote “M. Gallay has outdone himself, which says it all. It would be impossible to combine more charm and vigour with more exquisite accuracy. Even the most rebellious and scabrous pitches emerged from M. Gallay’s horn like notes from an organ.”

Although Gallay’s teacher Dauprat is today held in great esteem for his comprehensive Méthode de cor-alto et cor-basse, it seems that by the early 1840s all was not well in the Conservatoire horn department. Someone, writing anonymously in La France Musicale on 10th April 1842, expressed his “astonishment” that Gallay was not yet a professor at the Paris Conservatoire, as “the horn school is completely neglected” and that “Gallay alone could restore its old reputation.” Six months later, the 61-year old Dauprat had retired, and on 25th November, La tribune dramatique announced that “M. Gallay has just been named professor of the horn at the Conservatoire.”

Pierre-Joseph Meifred had been in post as professor of valve horn since 1833, though it seems that the Conservatoire authorities regarded valve horn playing as something completely different from hand horn playing and there does not seem to have been any crossover of students between the two classes. Gallay could now, at least, stamp his own authority on the Conservatoire’s hand horn class; while Dauprat’s students only sporadically won first prizes (the prizes were awarded by a committee, and not by the individual professors), 1843, 1845, and 1864 (the year Gallay died) were the only years when a first prize was not awarded during his tenure.

His Méthode pour le cor appeared in 1845, and although a slim volume in comparison with the tutors of Domnich and Dauprat, it makes some interesting points, not least in that by contrast to his predecessors, he advocated a more open hand position, recommending that players should maximise the variety of tone colour while avoiding uneven volume, by blowing less hard on open notes and harder on stopped ones. The Méthode also includes a chart showing different hand positions required to produce all notes through the range of the instrument and detailed descriptions of his preferred mouthpieces: his “model no. 1: for high horn players had an internal diameter of 16.5mm, his “model no. 2” for low players 18.5 mm. He recommended a rim width of 2.5mm, a total length of 72mm and a diameter at the “tail” of the mouthpiece of 7mm.

Gallay was a “first horn player,” a term he preferred to Dauprat’s “cor alto,” though he tended to use only the middle register for solo performances. His preference for horns with a relatively small bell throat influenced French design long after his death.

Gallay’s compositions include caprices and studies for solo horn, numerous fantasies for horn and piano, duets, trios and a Grand Quartet, Op. 26 for horns, each crooked in a different key. Although the fantasies use the era’s characteristic theme and variation form, they are musically more significant than most, and the Préludes mesurés et non mesurés retain their value both musically and as study material.

Among his most distinguished students were Jean Garigue, who played at both the Opéra-Comique and at the Paris Opéra, Pierre van Haute, who played principal horn in Manchester’s Hallé Orchestra, and Jean Mohr, who succeeded Gallay as professor at the Conservatoire. In June 1843 he married Julie Elêonore d’Hebercourt in Paris’s Basilica of Notre Dame des Victoires, a woman 21 years his junior who ran an antiques shop at Place de la Bourse, no.6, and in 1854 they had a daughter, Pauline Marie Thérèse. Gallay was made a Chevalier de la Légion d’Honneur in 1845.

After his appointment to the Conservatoire, Galley played at the Société des concerts aux Conservatoire and with the King’s chamber music ensemble until at least 1844, but rarely elsewhere, and he seems to have suffered poor health; towards the end of his life he obtained permission to teach from his home at Rue Chabannais no. 14, as he could no longer get to the Conservatoire easily. Within days of his death in Paris, Mohr was announced as his successor.

By John Humphries (with thanks to Anneke Scott for her input.)