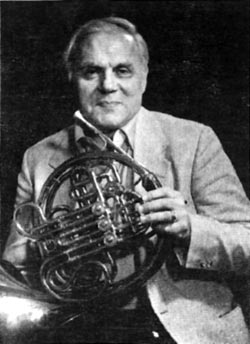 Morris Secon was an inspiration. He was honored as Professor Emeritus at the Eastman School of Music in 2004, but he was perhaps better known to young players as the guy who would tell stories after hours at horn workshops and symposiums in rap sessions. He talked about occasions where he had jumped off a bus on impulse and ended up with a job. His most famous story was about winning an audition by playing a difficult Wagner bass clef E horn solo (Die Walküre) in F − the conductor (Reiner) did not notice the discrepancy and hired him then and there for the Pittsburgh Symphony.

Morrie was born in 1923 and raised in Philadelphia, where his parents owned a bakery. A cousin, David Burchuk, started him on trumpet at age 10. He changed to horn at age 13 on the advice of a school teacher. He studied with Arthur Geithe, who had been brought over from Germany to play principal horn in the Metropolitan Opera, after Geithe came into the bakery and learned by chance that Morrie played horn. Geithe encourage Morrie to sing, and to sing on the horn, which became a hallmark of Morrie’s horn playing and teaching style. Morrie later studied with Lorenzo Sansone at the Juilliard School. He had one lesson with Joseph Franzl, who told him to put his horn in the case and never open the case again. The next summer found them both playing in the same section at Chautauqua. Morrie had played the year before in New Orleans, and the following year in Pittsburgh.

Morrie became principal horn of the Rochester Philharmonic at the age of 21, staying for 15 years (1944-1959) and teaching at Eastman (1950-1959). One day in 1949, his wife came home from a yard sale with stoneware by Glidden Parker, a noted designer. Morrie found out that Parker had barns filled with seconds. He made an agreement with Parker, convinced his brother to open a store in New York City, and soon the Pottery Barn became successful and expanded. Morrie left Rochester, free-lancing in New York City and teaching at Queens College and the Mannes College of Music while working with the pottery business.

Getting back into music full-time in 1968, Morrie was co-principal of the Israel Philharmonic Orchestra for one year, then became principal of the Rochester Philharmonic again (1969-1982). His designation as Professor Emeritus is confirmed with testimonials from such distinguished students as Meir Rimon, Dale Clevenger, Richard Sebring, Eli Epstein, and Barry Benjamin. After his retirement, Morrie spent much time giving hundreds of his Magic of Music presentations.

Morrie was honored with the Punto award at the 1997 International Horn Symposium in Rochester NY. Articles about him appear in the April 1985, November 1997, and October 2007 issues of The Horn Call.