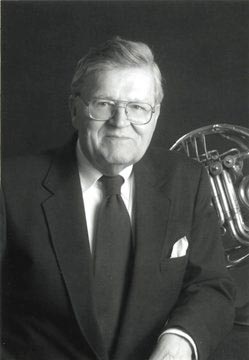 Milan Yancich played in the Rochester Philharmonic for 43 years, taught at the Eastman School of Music, and published books and music through his Wind Music publishing company, notably Philip Farkas's books and Milan's own method and An Orchestral Musician's Odyssey. He was generous with his time and money; he initiated the Geyer and Alexander scholarships at the IHS from book sales proceeds.

Milan was born in 1921 and grew up in Whiting IN. He earned degrees from the University of Michigan and Northwestern University and took lessons from Philip Farkas during some summers. He served in an Army band during World War II, then, in quick succession, played with the Columbus (OH) Philharmonic Orchestra (1946-1948), the Jerry Wold Dance Orchestra, assistant first with the Chicago Symphony Orchestra (1948-1951), principal and third with the Cleveland Orchestra (1951-1952), solo horn with the American Broadcasting Studio Orchestra (1953), and one year teaching at Michigan State University before being hired by the Rochester Philharmonic in 1954, where over the next 43 years he played all positions at one time or another.

Milan carried a heavy teaching schedule at Eastman, including teaching horn students, coaching woodwind chamber groups, attending brass and percussion juries and recitals, and teaching horn in the preparatory division. In addition to the Rochester Philharmonic (1954-1997), he also played in the Rochester Civic Orchestra, the Eastman Philharmonic Orchestra, and 27 seasons of principal horn with the Lake Placid Sinfonietta. He taught at Ohio State University, Capital University, and Baldwin-Wallace College. He also taught for a few summers at the Morehead and Gunnison Band Camps.

Wind Music Inc. was first a partnership between Milan and Philip Farkas. Although Milan soon bought out Farkas, he continued to supply Farkas's books. Milan published a method book with accompanying records to demonstrate concepts and techniques.

Milan served on the IHS Advisory Council (1981–84, 1998–2001) and led the IHS scholarship activities for several years. He was given the Punto award at the 1997 symposium at Eastman. Tributes appear in the November 1997 and February 2008 issues of The Horn Call.