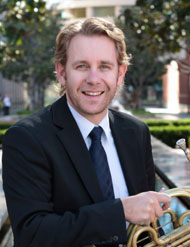 Kristina Mascher-Turner: The first question on everyone’s mind is, how long did it take you to recover from hosting #IHSLA2015?

Andrew Bain: I think I'm still recovering! It was such a wonderful week that I've been living off the memories for quite a while. Thank you to everyone who came to LA for the event.

KMT: In addition to your playing duties in the Los Angeles Philharmonic, you’ve been an active Hollywood studio musician. What are the most memorable movie soundtracks you’ve recorded?

AB: Well... Star Wars was AMAZING! I also really enjoyed the Good Dinosaur, Creed and Rwanda and Juliet which were recorded over the Summer. Other's that come to mind are Godzilla, Minions and Night at The Museum 3 which were all fun and terrific music.

KMT: You’ve recently played on the soundtrack to Star Wars: The Force Awakens. How does it feel to be involved with such a legendary project?

AB: It was honestly a dream come true to work with John Williams and play this incredible score. As horn players we grow up listening to John Williams' music and the Star Wars soundtracks. It was a thrill each day to go to the studio to record The Force Awakens. I still can't believe I was lucky enough to be involved.

KMT: How far in advance did the musicians receive the music?

AB: The recording took place over a number of months and many sessions so we received the music to each session 3-5 days prior to the recording date.

KMT: Start to finish, how long did it take to record the whole soundtrack? How many hours did you spend in each session?

AB: The whole project was from June to mid-November which is quite unusual for a film recording. I'm not sure of the exact number but I think we recorded over 20 and 30 sessions of 3 hours’ duration. Sessions were usually grouped in 2 per day and 2-3 days at a time.

KMT: How much contact, if any, did you have with John Williams during the recordings? Was he around the whole time?

AB: John conducted the majority of the sessions and was always involved in making changes or suggesting ways of getting the best result from each cue. He is incredible to work with. A true gentleman! A humble and generous person and a wonderful musician. He has an incredible feel for creating a musical moment that always enhances what is going on in the picture.

KMT: Did the soundtrack call for Wagner tubas?

KMT: Were you allowed a sneak peak at the film, either during or after the recordings?

AB: I was very fortunate to be able to go into the booth and listen to what happened on the previous take to give feedback to the section. As the music was played back it was matched with the film footage so I was able to see a little bit of the action. As a lot of film music is recorded out of sequence and as there is no dialogue I have no idea what was going on or who the characters were, but it looked really cool!!

KMT: What equipment did you play for the recording? Was this the same as the other horn players?

AB: I played on the horn I play in the LA Phil (I played on two horns - my 30+ year old Lewis Geyer and later and for most the recording process my new Lukas horn - that's the one that you hear on the solo at the end of the film. Most of the studio players in LA play Conn 8D or 28D horns. I think we blended really well on Star Wars and the result is some exiting music.

KMT:  Are you a fan of the Star Wars saga yourself, or was it just another gig?

AB: I grew up with the original Star Wars trilogy and absolutely loved the music and all of John Williams’ film scores. It was an incredible thrill and honor to play on this movie. I could not have been more excited to see the film when it was released this week. Congratulations to my wonderful colleagues of the horn group and the entire LA studio orchestra for an unforgettable experience and magnificent music making. I cannot express how proud I was to have been able to play on such a terrific project.

KMT: How do you arrange your schedule to accommodate your studio work? Do you take time off of the orchestra, or do you go from one to the other in the course of one day?

AB: Generally, I work the recording dates around my LA Phil schedule. Sometimes this means racing from a rehearsal at Disney Hall out to the studios, but this is pretty rare. I am incredibly fortunate to have a great job at the LA Phil, so it is a real bonus to have the opportunity to play some movie and TV recordings when the schedule allows. Occasionally, I will be able to take some time off from the orchestra to play film projects. I think it's great to have variety and keep things fresh and interesting.

KMT:  Did you get any Star-Wars-related perks for playing on the soundtrack?

AB: Disney were extremely kind and invited all of the Star Wars musicians to a pre-screening of the movie before it opened to the public. It was an incredible feeling to hear the opening chord of the film and the cheer of a packed theater full of people who work on the project. It was a really fun and emotional night knowing that we had been part of such an iconic piece of art and history. Having seen the movie and heard the soundtrack I couldn't be more proud of the result. May the force be with you.

Hear some of the soundtrack!