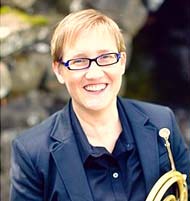 Most young horn players, while loving the tradition of western music, also love popular music. Therefore, encouraging them to experiment with non-traditional idioms is a logical step in helping them to use the horn creatively. Interesting things can happen when students are given non-traditional performance parameters. Some students flourish at the opportunity to be expressive in a non-traditional genre, and they can bring that freedom and versatility back to their more traditional performance genres. Technological tools can help a student better understand musical structures and form in application, and can help them gain versatility in musical expression.

There are innumerable technologies currently being developed for music making. To experiment with non-traditional idioms, you can explore the technologies of sound manipulation and recording. Hardware technology uses tools like a mic, a mouthpiece pick-up, or a silent brass mute (with a mini plug) as a source signal sent into devices that process and change the signal. The mics or pick-ups then go directly into a variety of stomp boxes, pedals, or mixers that are designed to create effects like reverb, delay, and distortion. A more modern device such as an iRig guitar interface can take the horn signal into a smartphone, tablet or computer, and from there, you can use all sorts of software (apps, computer programs) to create the sounds you want. The stomp box effects that electric guitarists use can be found in apps such as Amplitube. A variety of settings can manipulate reverb, delay, distortion, etc.

A great teaching tool can be a looping device. There are a lot of loopers available. The app, Loopy, operates on any smartphone or tablet and can be programmed to set up multiple loops, which can be used to create practice tools, such as setting up a bass loop and practicing improvising over it. The loops can be programmed to include structural elements common in pop and jazz tunes. Loopy (or similar programs) can also be used to create songs for live or recorded performances. Tutorials for using apps are easily found on YouTube, as are many excellent looped solo musician performances.

For recording projects, students also can use software that comes pre-installed on many devices, such as Garage Band. Audacity is another free software program that covers the basics of recording. Recording and uploading creative efforts to the internet has never been easier.

I encourage my students to collaborate with their peers who are learning about intermedia music technology. Intermedia music technology is a discipline exploring innovative uses of computers and other recent technologies for new media compositions. Electro-acoustic music pairs the elements of technology with traditional acoustic instruments for some innovative results. When a student studying music in the western tradition pairs their curiosity and creativity with a student interested in sound technology, they both stand to learn tremendously from their collaboration.

For anyone interested in some very new electro-acoustic music, I’ll be premiering a new work, Gjallarhorn, by Chet Udell, at IHS in LA. Gjallarhorn uses the motion detection technology interfaced with the horn and computer in exploration of the idea of the ‘enchanted horn’ in Norse mythology.

Software and hardware devices can be found at online retailers such as Sweetwater and IK Multimedia.