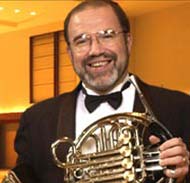 In 2014, The International Horn Society celebrated the 35th year of its Composition Contest. During this special anniversary year, there were two divisions in the contest.

1. The Featured Composition Division: Compositions in this division were works of moderate difficulty for solo horn and keyboard instrument.

2. The Virtuoso Composition Division: Compositions in this division had no difficulty limitation and were from one of the following instrumentation categories.

(The instrumentation for the divisions will rotate in future contests.)

The prize-winning composition for The Virtuoso Division was Hard to Argue (A Concertino for Five Horns) by Catherine Likhuta from Brisbane, Australia. The judges also selected two Honorable Mentions in the Virtuoso Division: 15 Low Horn Etudes for Solo Horn by Ricardo Matosinhos from Ermesinde, Portugal and Dancing on the Hill for Horn Ensemble by Patrick Hughes from Austin Texas, USA.

More detailed information about the winning works appears in the May edition of The Horn Call. More detailed information about the Honorable Mentioned compositions will appear in the next edition of The Horn Call. Plans are underway to feature these works in performances at The International Horn Symposium in Los Angeles in August.