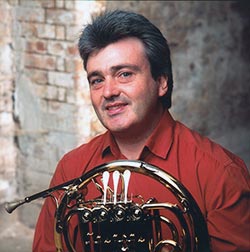 I've worked with James on many film projects over the years but it was playing on the score of 'For Greater Glory', a lesser-known film but full of wonderful horn writing both in a solo and ensemble context, that prompted a conversation about a concerto of some sort for the instrument: what might work, what length it might be and how we could do it. Eventually this led to tonight's collaboration for not one but four solo horns.

Obvious comparisons will be made with Schumann's Konzertstuck but James deliberately sets out to explore the spatial sound of the horns rather than highlighting the virtuosic element. We experimented during the rehearsal (and as is the norm in London there was only one rehearsal the day before the concert!) by placing the four soloists across the stage of the Royal Festival Hall. Of course I've worked with David Pyatt for many years and his colleague and fellow Principal in the LPO, John Ryan, but it was so good to play alongside Jim Thatcher-a legend here in UK as well as in USA! We all really enjoyed working together and spending a little down-time too after the rehearsals. The performance was enthusiastically received by a packed Royal Festival Hall and Collage with James on stage at the end received a worthy ovation!

We then celebrated the piece with James at a nearby Italian restaurant afterwards with families and friends and I think you can see from the photos how pleased James was with the whole evening!

Of course a million thanks go to everyone at I.H.S and in particular to Frank Lloyd for all his support and encouragement for bringing the idea to fruition. I very much look forward to being part of the Houston premiere next March and sincerely hope that all horn players will be encouraged to take up Collage into our repertoire.