The Arrival of the Horn in Colombia

This article describes the chronological, geographical, and cultural path in regards to the introduction and musical relationship of the horn in Colombia via symphonic orchestras and wind bands in the Caldas region from the colonial period through the 20th century.

The European Horn and its Arrival in Colombia 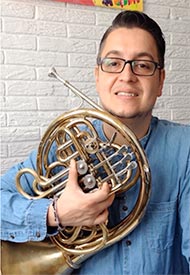 Part of the colonization process the American continent experienced was how the Spanish crown and its nobles tried to replicate the culture and customs of their motherland in the new American territories. After the conquest, and with the imposition of the Christian church, Spanish music came to New Granada by way of noble and rich landowners, who paid conductors to organize concerts, dances and parties, not only for religious, but also for social purposes. The horn at that time was called by its Spanish name trompa. It arrived in Colombia in 1783, although many musicians think its appearance occured in the previous century. Contrary to what one might expect, the horn in Colombia has quite an extensive history. Its first use was documented during the colonial period of the eighteenth century.

Colombian music history books[1] confirm that the horn appeared in the country for the first time in 1783 as part of a Spanish orchestra. This orchestra performed tonadillas (short pieces with dialogues, theatrical performances, and some music and dances), typically lasting about 30 minutes. These performances were the most important musical/theatrical genre of Spain, reaching their peak in the eighteenth century, all the while beginning to receive strong Italian influence. Performances of this orchestra were played in the first theater, the Coliseo Ramírez, which was founded by the approval of the viceregal authority, a military officer of that time whose name was José Tomás Ramírez. Over the years, that theater became known as the Teatro Colón.

This Spanish symphony orchestra performed for a season in 1795, with regularly scheduled concerts, including the participation of the first documented Spanish horn players[2]: Diego García and José Garzón. Also, as important an highlight in the book Historia de la Música en Santa Fe y Bogotá' by Bermúdez, we find the same horn players, Diego and José María García forming part of the José María Garzón group a year later. As a reference for the following data and in order to avoid ambiguities or other excessive clarifications, we chose the music history book by Perdomo Escobar, because it is the predecessor of both and provides more documentation.

The year after the horn arrived in Colombia (1784), the Banda de la Corona was founded. It was one of the first musical bands in Colombia conducted by Maestro Pedro Carricarte, who also conducted the first symphonic orchestra from Spain. According to the chronicler José M. Caballero, “the musicians under the mentioned conductor played music of horns and bugles.”[3] Those instruments had not been heard until then. Later, musicians from this band and others living in Santa Fé (Bogotá), experimented by bringing all the musicians together in a symphonic orchestra, which was a novelty at that time. This experimental orchestra performed works by Michael Haydn and Johann Christian Cannabich in homage to the arrival of the new archbishop of Bogotá: Baltasar Jaime Martínez Compañón in 1791.

The previous events describe the arrival of the horn in Colombia. Perhaps it was played without the "Hampel" hand technique because since the year 1791 it is not certain if the horn players incorporated this particular technique into their training due to the skills required for its implementation. It is possible that the musicians from Europe had heard about this new discovery however, in the review it was not possible to identify if they incorporated it in their performances.

In 1809 there were two organized bands, la Artillería and Milicias. There was a great rivalry between both bands, evident in every open air concert they performed. An example of this was when the bands tried to interpret what the other had played the day before. In addition, each one used to improvise new things to attract attention from the audience, even if these improvisations had nothing to do with art or with the correct performance of the instruments. One particular anecdote tells about “a horn player who lost his mouthpiece while traveling to Salto and surprisingly continued playing using a playing card.”[4]

The introduction of horns and other instruments into the bands was a big event and caused a great impact in the city of Santa Fe (Bogotá). According to chronicler José M. Caballero, “these instruments and players improved and enriched the low quality of the few instruments in the Cathedral of Santa Fé orchestra.”[5] In fact, it is mentioned later by the same chronicler that the skills between the elder and younger musicians were remarkable. As an important piece of information that complements the previous statement, in 1810, a musical evening was held in front of the house of the President of the Supreme Board, José Miguel Pey. For that event, and upon request of the conductor and the musicians, a stage with a lot of lights was adapted so that the musicians could read their sheets of music, which meant that the music was interpreted with the help of the paper. Until that moment the music played outdoors, generally by bands, did not use scores.[6]

From 1820–1828, Don Juan Antonio Velasco (organist of the Cathedral of Bogotá) held weekly meetings at his home accompanied by a small orchestra which performed masterpieces by great classical composers. Some of these concerts were held as special events or homages to the heroes of Colombia, such as Bolívar and Santander. For the first time, overtures by Rossini (Tancredi, L'Italiana in Algieri and La Gazza Ladra, among others) were heard. These works have two or four horns in their orchestration, a clear demonstration of the progress and the place that the horn was gaining in Colombia.

In 1838 (ten years after the events named above ) Spanish artists performed in Bogotá  the following theatrical works by Gioacchino Rossini and Gaetano Donizetti, La Gazza Ladra, L'Italiana in Algieri, Il Barbiere di Siviglia, and Lucia di Lammermoor. By 1846 the Philharmonic Society was created, which had five horn players: Felix Rey, Bernardo Dourde, Ignacio Otalora, Mariano Castillo and Mr. E. Jossup.[7] The previous information represents a further step toward the introduction of symphonic music in Colombia as well as the evolution of the horn, since the usage of horns was fundamental in this genre.

On July 20th, 1875 a public party was held celebrating Colombian Independence Day in the Plaza Bolívar with a military band. The band had horns as part of its instrumentation. Later in 1882, the National Academy of Music was created including the horn class. The horn teacher was Jorge W. Price, who not only taught horn, but also trombone and trumpet.

From the Natural horn to the “Flugelhorn"

Archives documented in Egberto Bermúdez´s book (2000), state that around the year 1865, the person in charge of the National Park wrote a letter to the Ministry of Finance describing the instruments of the bands Artillería, Zapadores and Ayacucho: “among the instruments…there are horns which had additional rings of tubing for their tones.”[8] That means that even in this year, Colombian bands still used natural horns. In addition, a flugelhorn in E♭ is mentioned as being the instrument that replaced the natural horns in the second half of the nineteenth century. This was because it was an instrument with a new sound (based in the text described by the instrument inventory clerk) besides, it had been recently invented by Antoine Joseph Sax[9], better known as Adolphe Sax. It was imported into the country between 1869-1874 by Importadoras Monpox, which supplied the national market, mainly in Bogotá, in the second half of the nineteenth century.

Harmony bands, as they were called at that time, played a very important role in public and outdoor venues. With the appointment of Maestro José Rozo Contreras as conductor of the National Band in the 1930s, and the growth of the musicians roster, two Italian horn players arrived in Colombia in the middle of the twentieth century. One of them was Sergio Cremaschi, who was a horn teacher well known throughout the academic and musical scene in Colombia. By this time, and based on photos of the National Band, there were four horns in this group, two of them were piston horns, or better known as E♭ Alto-Horns.

Due to the influence of Italian and Colombian musicians trained in this school, the term trompa, which was the Spanish word for “horn” used by Spaniards, changed to corno, which was the word used in Italy. Corno translates as the word “horn,” which refers to an animal horn such as goat, antelope, etc. As a result, the word corno was adopted, and continues to be used through the present day.

Evolution of Music for the Horn in Colombia

In the year 1783, when the horn arrived in Colombia, the literature for the instrument was very limited since the harmonic series produced few notes. Furthermore, in order to write melodies for this instrument, the players were placed in an uncomfortable, more difficult register. Therefore, many composers based their writing on the ability and technical possibilities of the available musicians. An example of this is the Mozart horn concertos, written for Joseph Ignaz Leutgeb, a horn virtuoso, who inspired and motivated Mozart to write the horn concertos.

The horn parts in the first works written by Colombian composers were limited to the  harmonic series with no melodies and without a leading role. In the operas written by the Colombian composer José María Ponce de León, Esther and Florinda – which were the first Colombian operas presented on stage – the role of the instrument is quite shallow.[10] The same occurs  in the compositions of Julio Quevedo Arvelo, son of the Venezuelan musician Nicolás Quevedo Rachadell. When we review his works for orchestra, we find the role of the horn is also limited. We cannot explain the exact reason of this fact, maybe it was due to the limitations of the instrument or the players, however, when the musical meetings were held between 1820 and 1828 in Colombia – where Rossini's Italian overtures were performed –  there was neither acknowledgement nor documentation alluding to the solo horns. It is uncertain whether these solos were played by horn players, or if those were just delegated to other instruments while knowing that at that moment European composers already had great knowledge regarding the sonorous, expressive and technical possibilities of the instrument.

When the Philharmonic Society was created in the mid-nineteenth century, there were five horn players that made it up. By now, the horn had taken a great step in its evolution, which included the use of piston valved horns. We cannot deny, however, that acceptance of the modern horn was difficult for many schools. An example of this is the French school, which was one of the most reluctant to use them. It is important to mention that composers were the biggest defenders of this new instrument because of its notable advances, which facilitated both writing and their performance.

Bedoya Serna, Hernán. 2014. Interview with the founder of Caldas department plan of bands. Colombia: via phone.

Restrepo Moncada, Alexander. 2014. Interview. Music teacher in the  magisterium of

Luis Fernando Lopez Muñoz holds a Bachelor of Music from the University of Caldas, and a Master of Music from EAFIT University. He is co-author of the book Iniciación al Corno, published by the Ministry of Culture of Colombia. He has performed in the Teresa Carreño Symphony Orchestra of Venezuela. Currently he works as a horn teacher at the University of Caldas and performs with the Caldas Symphony Orchestra.

[9]Antoine Joseph Sax, born in Belgium November 6, 1814 and died in Paris February 4, 1894. He was a manufacturer of musical instruments and is best known for his invention of the saxophone.