By Myself, Times Four 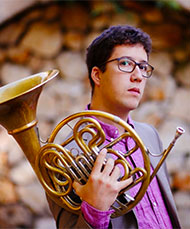 For this video of Shostakovich, and the other one where I play a quartet from Ilan Rechtman, I got inspired by all the Acapella videos. I wanted to play horn quartet during my load of free time this month, and not only with my dear section from the Orchestre National de Lille, but also on my own, having to perform in the extreme low as well as extreme high register. I chose the very demanding jazz quartet from Rechtman. I quickly figured out that I would not be able to play through perfectly soon enough (going to high E flat a few times, and everything so fast !) so I decided to record only the sound first, and allowed myself some editing with Apple's free software, GarageBand. When I was satisfied with the result, I wanted to make a video out of it, outside in the garden. I found out that iMovie could make me appear more than once on the screen; how happy I was !! I just had to play the four parts in four different positions after I placed a good camera and never touched it until the end. Playback was way more difficult than I thought! Then Bruce Richards started his HornQuartetChallenge, asking first which repertoire would please the most people and then offering an arrangement of the tricky scherzo from Shostakovitch 10 for volunteers to record it. What an opportunity for me, more challenge !!! Same software, same technique, I had to find a new screenplay though. Most of my free time was at night when the children were asleep, and that porch was scary enough for my set to match the intensity and the seriousness of the movement. A single light, some candles, a fixed gaze before and after playing, and I had the perfect mood. The ghostly effect comes from my bad use of iMovie to make me appear four times ! Ubiquity can't seem too real apparently...

Alexandre Collard was First Prize winner at the Prague Spring International Music Competition in 2018 - along with the prize for best interpretation of the contemporary piece, the International Horn Society Prize, the Radio Free Europe Prize and a further nine awards, Second Prize winner at the Città di Porcia International Competition in 2013 and laureate of the Autumn Music Festival Competition (FMAJI) in 2011, Alexandre Collard has been among the elite musicians of his generation since his studies, first with Guy Mouy in Douai and then with André Cazalet at the Paris Conservatory.