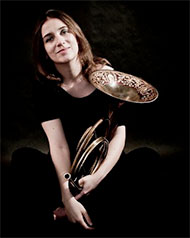 The beginning of the Coronavirus coincided with the tail end of a long Beethoven Symphonies tour with the Orchestre Révolutionnaire et Romantique. Whilst the orchestra is officially based in London, the musicians are a very international bunch. We find ourselves getting together for very intense projects and then going our separate ways. When you’re on tour, it’s easy to become slightly distanced from what is happening in the news. We were all hearing various things from our home countries and also picking up snippets of news from the countries in which we toured, but I think we were all aware that something was coming. We had about two months off between the end of this part of the tour (Chicago) and the beginning of the next part (London). Very sadly everything has now been cancelled, leaving a feeling of a gaping lacuna for us all.

The musicians from the ensemble continue to be in touch with one another - our principal trombone Adam Woolf immediately sprang into action with a rather nice idea, a project he called “Bach Together”. All the IHS readers are more than welcome to contribute to it! The idea is that we can all remotely add our voice a virtual choir and orchestra performing one of Bach’s chorale settings “Ich will hier bei dir stehen” from the St Matthew Passion. You can find the project here: http://adamwoolf.com/bach/

Adam knew I’d recently been given a beautiful two-valved piston horn and wrote asking whether I wanted to use my “new toy” for the project. The problem is that this instrument is nowhere near A440. However, I had just the thing for Bach chorales - my Corno da Tirarsi. This is an incredible instrument with quite an extraordinary story.

It appears that, for a short space of time Johann Sebastian Bach was writing for an instrument he called the Corno da Tirarsi. The problem is that no instrument, description, or drawing seems to have survived. The music that remains plus other instruments of the time are our best sources of information. Bach only starts writing for the instrument when he arrives in Leipzig and stops writing for it (and starts rearranging the music he had written in some places) after the death of the trumpet player Gottfried Reiche in 1734. This suggests that Reicha may have been the sole (at least in the geographic vicinity to Bach) player. Bach specifies “Corno da Tirarsi” in three cantatas, but there are a couple of dozen more from this period that fit the same style of writing. Often the instrument is called upon to double the soprano line in chorales, hence my thinking that this would be the perfect instrument to use for this “Bach Together” project.

The instrument I have is made by Egger in Switerzland and is the fruit of their collaboration with my colleague Olivier Picon. You can find out lots and lots more about the instrument in his dissertation, which can be found here: http://www.barokensembledeswaen.nl/html_e/olivier.pdf. Olivier has looked at both the music and the instruments that Leipzig makers were producing during this period and has come up with what seems a plausible hypothesis as to what the instrument could have been. I’ve had the instrument for about eighteen months now. The big reason for getting it was that I kept on being asked to do these problematic cantatas and was finding the experience of playing them on a Baroque horn deeply unsatisfying. They’re often very high and very chromatic and just don’t sit well. I was aware of Olivier’s work on the instrument for a long time, but my fear was that the day I bought one of these instruments someone would open a dusty cupboard in Leipzig and notice, for the first time in almost three hundred years, a box at the back and in it… the one original Corno da Tirarsi, and that it’d be completely different!

I’ve used this instrument for a number of concerts now but have never felt as if I’ve had the time to put enough work into it. My contribution to the “Bach Together” project provoked a memory - when I was a student, a number of my contemporaries had come to brass playing through the Salvation Army. There was a tradition of playing hymn tunes in the band room as part of our practice. I was also now in a place where all my work for the foreseeable future had been cancelled and was aware that this was likely to be the case for a long time to come. This sparked the idea of a chorale a day. Working my way through the chorales was a way of getting to know the instrument better as well as something to help pass the time. It also has been a way for me to keep in touch with my students as I’ve been encouraging them to come up with other similar projects of their own. Analysing my own playing and documenting the progress has been a great thing to share with my students. Thus “Corno Not Corona” was born.

The auxiliary “Corno Not Corona” came about because the word on the (virtual) street was that we may be in lockdown for 12 weeks. The Gallay Caprices have been a mainstay of my practice since I was a student, and I’m constantly struck by just how much there is in them. They are very liberating pieces as the style of writing is so improvisational, so free, and each time I return to them I have new thoughts on how I could play them. One of the delights of these pieces is, given that there are so many ways they can be played, how no two performers will make the same decisions. That leads to so many different interpretations. The pieces are real workouts! I’ve performed them in concert and recorded them but thought it’d be a challenge to see if I can do a one-take recording of them.

A daily Bach chorale on the Corno da Tirarsi
A weekly Gallay Caprice on the hand horn
https://www.annekescott.com/