Being a Baseball Umpire 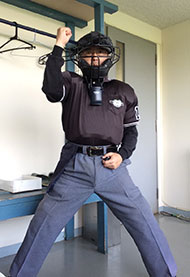 As a principal hornist for Tokyo Philharmonic Orchestra, I am also a baseball umpire on the weekends.

Before playing French horn in my high school years, I was a member of a baseball team.

After joining the orchestra, I gathered friends to form a team to play baseball games. However, we stopped playing baseball after some of the team members stopped coming to the games due to life changing events such as job changes and marriages.

I decided to go to the seminar, and to my surprise, I was able to get coached by Jim Evans who is the Principal of Jim Evans Academy of Professional Umpiring (approved by MLB). I also became a member of MBUA (Metropolitan area Baseball Umpire Association) after someone from the seminar recommended that I should join the association.

Ever since then, I umpire amateur baseball games a few times a month whenever there are no concerts or lessons.

Judging a pitcher throwing an outstanding curve ball, watching the ball be hit by the batter, a swift-footed runner running over the base and making a call...

Being able to stand behind the catcher is the greatest position to enjoy the baseball game.

It may sound strange, but I feel I can perform as a hornist better after umpiring a baseball game the day before.

I umpire roughly 50 games a year. As long as my health allows, I would like to continue umpiring baseball games.