New York Freelance hornist and actor/writer/director, Kyra Sims, tells us about her life as a horn player and theater artist.

Before we learn about all the non-horn playing interesting things about you, tell us about your life as a horn player. Where did you grow up? 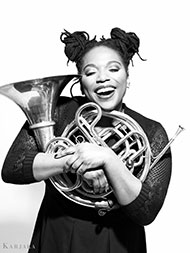 Germantown, TN, right outside of Memphis

When did you start playing horn/where did you study

I started playing horn at age 11, when I joined the 6th grade band at my middle school. I had already been taking piano lessons for several years so I could read music in both clefs, which gave me a leg up on learning horn. I didn’t start private lessons until I was in 9th grade though, so the first year or so of study was my teacher (Jill Wilson) helping me get rid of all my bad habits!

Who are some of your heroes as horn players? As artists? As people?

When I was studying with Jill, she had this beautiful dog, a malamute, whom she’d named Frøydis, after the Norwegian horn player Frøydis Ree Wekre. She told me a little about who Frøydis was, and soon after I found an album of hers at a band clinic. She is still to this day one of my favorite horn players to listen to. Other artistic heroes of mine include the actress Viola Davis, and Lizzo!

You have trained with the Upright Citizens Brigade, you do stand-up comedy, right? Do you also do theater? Other acting?

I did stand up for about a year or so, and I did pretty well I think- I made it into a comedy festival in Chicago, and had a good set there. But after that was over I realized how time intensive it is to become a really good stand up comic, and I didn’t have that time in my life, and I didn’t want to be just an okay comic, so I decided to stop. My main theatre-making these days is with a theatre company I joined in 2015, The New York Neo-Futurists. With them I write, direct, and perform tiny plays- about 2 minutes or less- in a show called The Infinite Wrench. In the show, we try to perform 30 of these plays in 60 minutes, and the audience decides the order. It’s chaotic and experimental, but with moments of truly real, grounded art. I love having a theatre family that keeps me on my toes and lets me be completely myself. 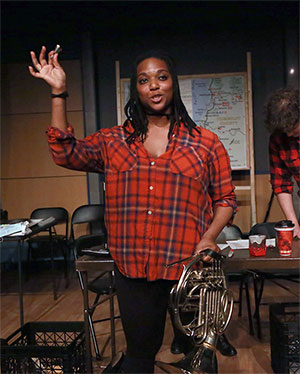 How did you get involved with comedy/acting/performing without the horn?

I was actually acting and performing way before I got serious with the horn. I studied dance when I was young and performed regularly with my dance school, and was in theatre productions at my middle school and high school. I even did some smaller productions in undergrad while getting my Bachelors in horn. So it was no surprise to me (or anyone else) that once I finished my Masters in horn at Manhattan School of Music that I would end up doing some sort of theatre again.

What do you enjoy about comedy/acting/performing without the horn?

It’s a way of performing that I’ve been doing since I was a kid- it’s in my bones at this point. Playing horn is great, but it does remove you from the audience mentally because there’s so much to think about in order to play it well. When it’s just me, being myself onstage, right there with the audience, I feel really connected to both them and to what’s happening.

I tell people all the time that joining the NY Neo-Futurists has made me a better horn player. For one thing, we never play characters onstage- it’s part of our theatre-making aesthetic- so I’m just putting in a lot more hours now being onstage as myself. Another thing is that by the very nature of the show we do, failure is always a possibility, and happens fairly often. Learning how to be ok with failure, and sometimes even turning a failure into a new kind of success, has informed how I approach the horn in such an invaluable way. Turns out, if you’re ok with cracking a note or two, you crack fewer notes. Who knew? 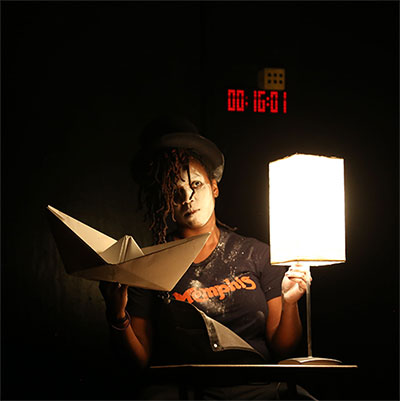 How do you balance all of the things you do in your professional life?

Google calendar is my best friend! Also, being a freelancer, I can usually fit all my commitments together like fun, money-making puzzle pieces. In the instances where two things do conflict, I ask myself a few questions: #1- What’s my gut telling me? #2- How much money do I need this month? #3- What’s going to benefit me the most in the long run, both artistically and career-wise?

What is your dream gig?

It would be pretty amazing to do one of those John Doyle productions where the actors are also the musicians!

Still onstage, performing for whoever wants to look at me! I’m also interested in becoming a producer.

What advice do you have for young musicians who dream of pursuing a career in the arts?

Keep loving it. If you ever find yourself doing art out of obligation and you’re miserable, please stop and find something that makes you happy. Art will always be there if you want to come back, but happy days are precious. Not to say that every day will be bliss- I definitely did my fair share of crying in practice rooms- but if you wake up one day and you can’t remember the last time your art made you happy, make a new plan.