Some thoughts on warming up 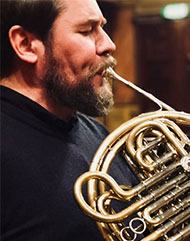 During my 30 or so years of teaching the horn, my teaching methods have gone through some evolutions. The tendency has been consciously and unconsciously to simplify things, both for me and for my students.

The physical part of playing the horn is not rocket science, but in my opinion it is actually quite a simple procedure if one has basic musicality and a certain talent for body coordination. It is about producing wind with varied speed against the sail, which is the lips. The more complex part is the “song,” as in Arnold Jacobs’ “Song and Wind”. The brain, or your soul if you prefer, gives you the song. The song should pass through your body into the horn freely, just as good singers would approach a beautiful melody in their best range.

This, in a nutshell, is why we practice.

It is important to get a good start physically to your horn-playing day in order to find this free, natural song. Breathing exercises before touching the horn are very valuable. Try to relax your breathing, so that inhaling or exhaling larger amounts of air and doing it slowly  or quickly feels natural, like a reflex, and involves tensing muscles as little as possible. Look for inspiration from yoga.

You should then make sure that the lips are in a good position against each other for free and effortless vibration. Lips that are too open or too tight will lead to many problems. Use mouthpiece buzzing and mental images to find the right position; avoid any squeezing or thinking about the muscles. Play just with the mouthpiece around the middle range, looking for an effortless transition to and from the low range. Listen to the sound. Is it free and centered? I personally use a little buzzing only with the lips in my warm up, combined with mouthpiece playing. This should be done with caution on just a few middle-range notes. In daily practice, a bit of controlled buzzing only with lips can be used for embouchure strength building.

Relaxed air flow and easy buzz are the cornerstones of my warmup routine and horn playing philosophy. My other important warm up exercises are for flexibility, low range and attacks. I have, as many others nowadays, discovered the benefits of flutter tongue, which are in my opinion:

I combine several of my warmup exercises with flutter tongue.

My warm up contains flexibility exercises for all registers:

What are the two most important skills of a professional horn player? I would say hitting the right notes and holding them.

Your warmup, before the rehearsal, should therefore include practicing attacks.

My method involves building up a strong sense of timing for all the different parts of the attack.

I try to fetch helpful mental images outside of horn playing. All sorts of ball games are very useful for this, my current favorite being “Pétanque” or “Boules,” played in many European countries. Other favorites include badminton and darts. It is the soft arm and release that I am after.

Play different scales and durations in a medium slow tempo, also on the F horn, and use flutter tongue with quavers to bring the tongue to a perfect position for a clear attack.

It is important to have small breaks in your warmup routine - it shouldn’t be too much hard work. There is time for that later in the day in the orchestra, or while practicing pieces, etudes or doing other exercises.

My warmup usually takes about 30 minutes before orchestral playing and 60 minutes when I have the luxury of a practicing day, or with my students. Take a short break after your warmup and feel ready for the day, ready to release the song inside of you with free breathing and a good wind against your perfectly trimmed sail.

Markus Maskuniitty began his music studies in the Rauma Youth Band at the age of 9 and went on to study with Timo Ronkainen at the Sibelius Academy in Helsinki. Maskuniitty was a prizewinner at the Nordic Horn competition in 1989, at the Markneukirchen International Instrumental Competition in 1991 and at the ARD Competition in Germany in 1994, and he was named Brass Player of the Year in Finland in 1992. He has created an extensive career as a horn soloist in the capital cities of three European countries.

Markus Maskuniity has been a member of the Stockholm Chamber Brass (2000–2010) and the Berlin Philharmonic Octet. He has premiered horn concertos by Jukka Linkola, Harri Wessman and Jorge Torres Sáenz and a double horn concerto by Andrea Tarrodi. In 2000 Maskuniitty was appointed Professor of Horn at the Hannover Musikhochschule.