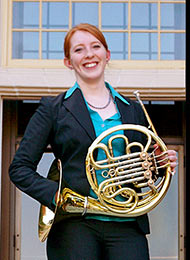 In the nineteenth century, with increased wealth from industrialization, the American public began to establish orchestras.  Many of the musicians in these orchestras were immigrants, mostly from Germany and Bohemia.  To this day, many of the instrumental traditions or schools in the United States are in the German tradition; the horn is no exception.  Today, most American horn players play on German-style horns and focus primarily on Austro-German repertoire.  Concertos by W. A. Mozart, Richard Strauss and his father, Franz, and Franz Joseph Haydn are standard works, along with sonatas by Paul Hindemith and Joseph Rheinberger and the Johannes Brahms’ Horn Trio.  The average undergraduate horn player will play three standard French works:  the Dukas Villanelle, Bozza’s En Forêt, and the Saint-Saëns Morceau de Concert.  A few will play the Poulenc Élégie or the Françaix Divertimento.  Sadly, this leaves a wealth of French repertoire neglected by most American collegiate horn players. While it is important to learn standard repertoire, there are many hidden gems in the existing French repertoire.

In exploring twentieth-century French repertoire, it is common to see inscriptions “à Jean Devémy.”  As horn professor at the renowned Paris Conservatory for over thirty years, from 1937 to 1969, Devémy had a powerful influence on the development of horn playing and repertoire in France in the twentieth-century.  Thirty-one pieces from twenty-six composers, all French, were commissioned as examination pieces during Devémy’s tenure at the Paris Conservatory.  Only two have become standard pieces in the American repertoire:  Bozza’s En Forêt and the Françaix Divertimento.  The remaining twenty-nine pieces are of mixed quality, but hidden in this collection are works that deserve more recognition and exposure and that reflect the rich heritage left by M. Devémy.

Jean Devémy was born in 1898 in Valenciennes, a French city located near the Belgian border.  Initially, he was attracted to the oboe, but the horn teacher at the Conservatoire de Valenciennes, Arthur Cantin, had a “friendly and noble air,” so Devémy chose to study with him instead.  In 1921, he won the Premier prix by unanimous vote at the Paris Conservatory in the class of François Bremond and began his career, playing principal horn with the Colonne Orchestra and the band of the Republican Guard.  As a member of the Quintet of Soloists of the Republican Guard, he traveled throughout France and much of Europe, giving over one hundred fifty concerts.  For many young French musicians, the idea of becoming a uniformed member of the Musique de la Garde represented the ultimate prestige, as many of the professors from the Paris Conservatory played in its ranks, creating a veritable showcase of the excellence of French wind playing.  Devémy remained with the group throughout his career and welcomed several of his students as his colleagues in the horn section.

In 1922, Devémy was named principal horn of the Radio-Paris Orchestra and, in 1930, he became principal horn of the Opéra-Comique.  In 1934, Arturo Toscanini came to Paris to conduct a series of four concerts.  Jean Devémy played Brahms’ Second Symphony and Beethoven’s Ninth Symphony under him, receiving rave reviews from the press as well as from the great conductor himself.  In rehearsal, Toscanini is reported to have restarted the famous Ninth Symphony solo nine times, with Devémy “imperturbably playing it magnificently each time.”  Toscanini then turned to his secretary and said, “But he will never miss.”

Devémy was a frequent soloist with many of Paris’ top orchestras, including the Lamoureux and Pasdeloup orchestras, as well as in Brussels.  Daniel Bourgue, the great French virtuoso and former student of Devémy, credits Devémy with bringing the forgotten Mozart horn concertos to the public’s attention, with performances in Paris and Provence.

Named the professor of horn at the Paris Conservatory in 1937, Devémy had considerable success, his students winning fifty Premiers prix in his first fourteen years.  His students also competed well at the Geneva International Horn Competition:  Gilbert Coursier and Georges Barboteu both won Premiers prix, and numerous other students were recognized as runners-up.  Devémy always loved teaching, relishing the opportunity to perfect and push horn players of a high standard.  Many of his students went on to play in France’s top orchestras and military bands or teach in the regional conservatories.  Two of his students, Georges Barboteu and Michel Garcin-Marrou, succeeded him as professor at the Paris Conservatory.

Devémy died in 1969, one month before he was to have retired from the Paris Conservatory.  He is remembered as a modest and cordial man, always ready to tell a good story.  As a musician, he loved melody above all and had a natural, expressive way of phrasing.  Although he taught all the technical aspects of playing well, he stressed phrasing, style, and good taste before all else.

The thirty-one morceaux composed for Jean Devémy’s studio form a diverse repertoire, ranging from impressionistic to modern, from light and witty to dark and somber.  The twenty-six composers who wrote these morceaux are equally diverse.  The oldest, J. L. M. Maugüé, was born in 1869, fifty-three years before the youngest, Pierre Hasquenoph.  The transformation of the morceau de concours from a formal examination piece with minimal originality into a distinctive and enjoyable piece of music can be traced through the thirty years Devémy taught at the Paris Conservatory.  In the tradition of the Paris Conservatory, where change was opposed with every effort possible, the older composers created works that could have easily been written thirty or forty years earlier, using archetypes and harmonic language that belonged to the previous century.  In contrast, the youngest composers (Hasquenoph, Pascal, and Gartenlaub, for example), created fresh and unique pieces without relying on the traditions of the past, by using their own distinct voices.  Those between the two extremes, such as Henri Tomasi and Eugène Bozza, tended to combine the old with the new, presenting old archetypes in more original settings, in an interesting hybrid.

Despite their many differences, the composers had many things in common.  All but one (Charles Brown) received their education at the Paris Conservatory, and thirteen of the twenty-six were honored in the Prix de Rome contest. Almost all of the twenty-six were public servants:  eleven went on to teach at the Paris Conservatory, four others were named directors of regional conservatories, and others worked in the public radio sector, served in the military, or were involved in music education. They are not the avant-garde, the radical innovators. Names like Varèse, Messiaen, and Boulez are conspicuously absent from the list.  Rather, the morceau de concours composers are deeply rooted in the established academic world of twentieth-century Paris, providing us with a more realistic picture of musical life – how it is studied and performed and by whom – in Paris during this time.

The quality of these works varies greatly: some are best left forgotten, but others are under-appreciated gems, including the Pascal Sonate, the Planel Légende, and the Tomasi Concerto.  It is my hope that this article will inspire more horn players to explore lesser-known French repertoire in the future and, in doing so, remember the man whose supreme musicianship and technical mastery shaped horn playing in twentieth-century France: Jean Devémy.

Dr. Emily Britton, a native of Rochester, New York, currently serves as Consortium Instructor of Horn at the University of Evansville and Principal Horn of the Evansville Philharmonic Orchestra. She holds a Bachelor of Science degree in Music Education from Roberts Wesleyan College, a Master of Music Performance and Literature degree from Eastman School of Music, and a Doctor of Music degree in Brass Performance from Florida State University.