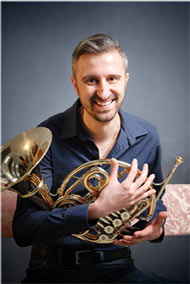 My name is Constantin-Lucian Tompa, and I am a horn player (former principal for almost 18 years until the 2017-2018 season when I stepped over to second horn) at the Romanian National Opera in Cluj-Napoca, Romania, and I am horn professor at the Sigismund Toduta College of Music. I was born into an artistic family: my mother was a fashion designer, and my father was a violin player in the city orchestra. I have a younger brother, Sergiu-Florin Tompa, who is also a horn player; he works at the Hungarian State Opera in Cluj-Napoca. Here is a link of him playing as a soloist with the Transylvania State Philharmonic Orchestra in 2012 during his masters studies at Gheorghe Dima National Academy of Music: https://www.youtube.com/watch?v=gx6ESO91HLE. Sergiu and I both studied music in Cluj-Napoca with Professor Vasile Oprea from fifth grade through high school, and then with Professor Alexandru Marc for our undergraduate and masters degrees.

Rather than writing about myself, however, I want to describe some aspects of the “horn life” here in Cluj-Napoca, a major city in Romania with 450,000 inhabitants situated in the well-known Transylvania region of the country. In the city, the primary cultural entities are the two operas (financed by government), the Romanian National Opera and the Hungarian State Opera; this is a unique situation because our town was part of the Austro-Hungarian Empire until 1918. In Cluj-Napoca, there are also the Transylvania State Philharmonic Orchestra and Chorus; The National Academy of Music “Gheorghe Dima” and “Sigismund Toduta” College of Music. The National Opera and The National Academy are celebrating their centennial this year.

Horn playing in Cluj-Napoca is an old tradition—and a strong one—but most important, in my opinion, is the bond that revolves around our instrument. The force that connects horn players all over the world is very much alive here, creating a nice horn community currently centered around professor Dr. Alexandru Marc (age 64), principal horn player at the Transylvania State Philharmonic Orchestra and professor of horn at the Dima National Academy of Music. He is a passionate person who has fought all his life for his students so that they would have the best possible learning conditions and quality instruments, a person dedicated to horn playing and teaching. It is no exaggeration to say that all of the professional horn players currently working in the Cluj-Napoca orchestras, in the philharmonic and both operas, have been his students at some point.

Another forceful personality (a man very close to my heart and, I’m sure, close to all Romanian horn players and countless others) that we had the privilege to know, whether as his students or colleagues, was Vasile Oprea. He is no longer with us, but his memory will continue living in our hearts. He was a virtuoso player and devoted teacher, the teacher that put the horn into many little hands, including mine. He dedicated his whole life to the instrument. He inspired many, many young people with a love for horn, saying, “The Violin is considered to be the Queen of the instruments, but the Horn is the King because it has the largest ambitus among wind instruments and is the closest instrument to the human voice by tone.” In this photo, from left to right, are Ion Marina-Uifalean (current member of the Transylvania State Philharmonic Orchestra), Mr. Vasile Oprea, and me during high-school (around 1997).

There are many other personalities that have created the wonderful “horn cluster” we have today in our city, but there are also a number of personalities that came from Cluj-Napoca working around the world and contributing to our international presence. I will give some examples (but I will not be very detailed because the list is long), and among the first I have in mind is Mr. Mircea Ladiu who started his career at the Romanian National Opera. During a tour in Italy, he escaped the past communist rule of Romania and became a member of the Symphonic Orchestra in Munich, Germany. Throughout Europe, the are other horn players from the horn school in Cluj-Napoca, including Ion Ratiu, Remus Cozma, Vasile Pintea (who is also a horn builder and mouthpiece designer/maker), and Nicolas Dosa

(who was principal horn at the Monte Carlo Philharmonic Orchestra). Other hornists trained by the school in Cluj-Napoca who have performed or are currently performing in other parts of the world, including Sorin Osorhean (Durban, South Africa), and Nicolae Bivol (a principal horn player and professor in Turkey), and Radu Rusu in Nashville, Tennessee. Along with Radu in North America, you will find many other deeply passionate Romanians connected to horn playing and horn building. You might be surprised to learn that Ion Balu, maker of some of the finest mutes in the world, www.balumusik.com learned to play horn in Cluj-Napoca, and he played for some years in the Romanian National Opera Orchestra and then in the United States in the Memphis Symphony Orchestra. Another horn player and successful horn maker who also originated from Cluj-Napoca is Felix Cantesanu, owner of www.c-horns.com (and also a former player at my opera). And, the last I want to mention, there is Daniel Vidican, owner of www.lukashorns.com (a former member of the Transylvania State Philharmonic Orchestra), also a successful horn builder in the US.

I believe that the spirit of the horn is in all of us who play this noble instrument; and with this “Letter from Transylvania,” I wanted to show that a part of this spirit originated in my Romanian home town and has widely spread into the world, interacting positively and beautifully with other horn cultures, combining with and developing as part of the global horn phenomenon, people who play, teach, and build but who all love our instrument, The Horn.