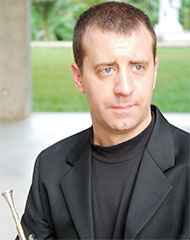 Hello fellow horn players and IHS members! I have been the editor of the IHS Online Music Sales since its creation nine years ago. The Online Music Sales (or OMS) grew out of the IHS Manuscript Press, which was set up long ago as a mail-order sales outlet for prizewinners of the IHS Composition Contest. In 2009, internet e-commerce was taking off, and the Advisory Council wisely decided to get on board by widening the scope of the Manuscript Press. In the beginning, it only offered submissions of composition contest prizewinners, then expanded to include anyone wishing to make their horn-focused compositions available for purchase as PDF downloads. In 2010 the Online Music Sales was launched.

It has been gratifying to watch the catalog triple in size since that time. At this point the number of pieces offered for sale is around 130 and is still growing steadily. We add new pieces every month. The catalog is carefully curated; every piece goes through a review process. The original team included Jeff Snedeker, Dan Phillips, and myself. Recently we added two more members, James Boldin and Gina Gillie, to the committee. Together we look at every submission, discuss its merits, and decide on a selling price.

One of the aims of the OMS is to make the music we sell accessible and affordable worldwide. We especially keep affordability in mind when pricing the music. As a result, our prices are lower than most other online music sellers. At the same time the IHS wants to encourage and reward composers for making their works available, so it pays them a 25% royalty (this is generous in comparison to the industry standard of 10% or less).

Recently the OMS has undertaken two large-scale projects to collect and sell works by Douglas Hill and John J. Graas. Doug Hill is, of course, a well-known pedagogue and is also one of the most prolific modern composers for the horn. The Hill Collection was initiated three years ago and now includes about 35 titles with many more on the way. Particularly noteworthy are his texts about warmups, high range, low range, and trills and tremolos. John J. Graas is one of the pioneers of horn in jazz, and Jeff Snedeker has undertaken the project of transcribing and re-engraving his music so it can be accessed by a wider audience.

There are too many other works and composers to mention them all, but I will highlight a few. One of my favorite titles in the catalog is Ricardo Matosinhos’s Heptafunk for twelve horns. Kerry Turner is well known for his challenging and fun compositions, and the OMS is proud to offer a few of his works. John Ericson has recently added several of his etude compilations to our catalog, Robert Ward of the San Francisco Symphony has several well-done arrangements, Mark Schultz’s groundbreaking and award-winning piece for horn, percussion and tape, Dragons in the Sky, is on offer, and on and on and on.

Please feel free to peruse the catalog. There are sample pages to look at for all titles, and many of them have audio clips. As I said, new pieces are added frequently. You can follow the IHS Facebook page for update.

Finally, if you have a horn-centric piece that you would like to have included for sale in the OMS feel free to contact me. Happy shopping and happy horn playing!

Daren Robbins is the Instructor of Horn at the College of Music at Mahidol University in Thailand where he also serves as Assistant Dean for Professional Services and Manager for the Thailand Philharmonic Orchestra. He holds degrees from the University of Wisconsin-Madison, University of North Texas, and University of Iowa. Daren lives in a quiet suburb of Bangkok with his wife Jakky and two cats Casper and Ploo.