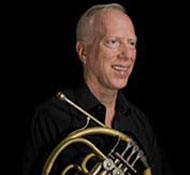 While originally created as an international organization, the International Horn Society was founded in the United States, and its early events and publications had an American focus. Sixteen of the first twenty IHS symposiums took place in the US, and twelve of the fifteen Horn Society presidents have been American. Before the internet and personal computers, English was the only viable option for international publishing.

The IHS is currently working to increase membership in Latin America, which has a vibrant musical culture and tremendous horn talent. Classical music plays much the same role in Latino cultural life as it does in European countries. Professional orchestras can be found in all the major cities. Venezuela´s El Sistema youth orchestra program is being copied around the world. However, geography has been a limiting factor in the  communication between Spanish-speaking hornists. Mexico City to New York is half the distance of Mexico City to Buenos Aires. And while Spanish has the second largest number of native speakers in the world after Chinese, there is little material available about the horn and horn playing in the Spanish language.

At the suggestion of IHS vice-president Kristina Mascher-Turner, I have been working on a project to translate classic Horn Call articles to Spanish. As a non-native Spanish speaker, I have been working with my students Karla Aranely González Barrajas and Jana Elizabeth Navarro Antuna, as well as with my children Christopher and Nicole Eitzen Delgado, to create idiomatic translations of some of the best writing to appear in the IHS magazine over the last 50 years. The first published translations can be found here:

Having been a member of IHS since 1974, I have an almost complete collection of Horn Call magazines. When picking out articles to translate, several instantly came to mind as having presented important ideas in novel ways. I organized them in four categories.

The Horn Call has often included book chapters. As most of the source material is not available in Spanish, these excerpts can present the concepts of important authors. Fred Fox contributed the chapter “Playing a Simple Crescendo- Diminuendo on Middle G” from his highly original book Essentials of Brass Playing. From the classic Philip Farkas book The Art of Musicianship we have “Conquering Nervousness or Stage fright,” and Eli Epstein´s important book Horn Playing from the Inside Out gives us chapters on “Dynamics” and “Beyond the Notes: Authentic Expression.” I also included two sections from the book La Trompa: Su Teoría y Técnica Básica by the great Argentine hornist and pedagogue Antonio Iervolino. His work is unpublished and has been circulating throughout Latin America in the form of photocopies. The two sections published in English in The Horn Call cover breathing and lip aperture and are now presented in the author’s original version.

From the many great interviews published over the years, I chose a conversation with Radek Baborák from 2001, a year before he entered the Berlin Philharmonic.

A very useful Horn Call column has professional hornists discussing the preparation and interpretation of famous orchestral excerpts. We have translated advice from Philip Farkas on the opening solo of Strauss’ Ein Heldenleben and Greg Hustis’ long analysis of the horn parts to Mahler´s Fifth Symphony.

Finally, in a general section on technique we have four articles. The Swedish player Ib Lanzky-Otto asks, “Is a Beautiful Horn Sound Really of Any Importance?” Jeffrey Agrell recommends specific etudes for working on all manner of technical playing challenges. Daniel Grabois presents important tips for accuracy in “Tired of Missing Notes? Work on Intonation.” And William VerMeulen shares secrets from his highly successful audition preparation system.

These first translations are the beginning of a long-term project to share the International Horn Society’s wealth of information with the Spanish-speaking world and enlarge our horn playing community. There will be much more to come.

American hornist Keith Eitzen has been a member of the Xalapa Symphony Orchestra since 1985. Named professor of horn at the University of Veracruz in 2001, nine of his students have won 19 professional auditions throughout Mexico. He is the Mexico representative for IHS.

This email address is being protected from spambots. You need JavaScript enabled to view it.