Quebec-France-Vienna - my program for IHS51 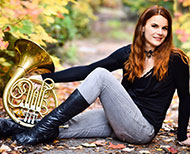 The program I chose for the symposium is mostly influenced by my personal taste and own musical journey.

I really enjoy horn music of all eras as well as music that is sometimes put aside, like contemporary music. In fact, my concept was to introduce the audience to francophone repertoire from Quebec composers in combination with French music.

I particularly love the spirit of French music. The virtuosity really excites me, along with the refined harmonies that bring a unique lyrical approach. I find that French music sings by itself! I suspect that my training at the Montreal Conservatory is in part responsible for this attachment to French composers as well as listening a lot to the Orchestre Symphonique de Montréal playing French music !! Hahaha!!

Gougeon is a well-established composer. “Cor-Jupiter” is part of a cycle of works entitled "Six Thèmes Solaires.” It has become famous here and is a standard for horn competitions. It's a challenging piece that has effects such as playing into the piano and multiphonics.

I wish I could introduce my favorite Quebec composer, Jacques Hétu, as well! He wrote a wonderful piece called “Lied for Horn and Piano” in the 80’s. He later orchestrated it to complete his Sérénade Héroïque for horn and orchestra, which my former teacher, John Zirbel, premiered, and which I later played as a soloist with the Orchestre Symphonique de Québec.

Viennese music has had a special place in my heart since I was 13 years old, when I discovered Mahler. I come from a non-musician family, so the way to Mahler was not an obvious one! I had learned from my high school music teacher that Bernstein had just died. When I went to public library, I saw a cassette of Bernstein and checked it out! I didn't realize it was in fact Mahler’s Second Symphony with Bernstein conducting!! 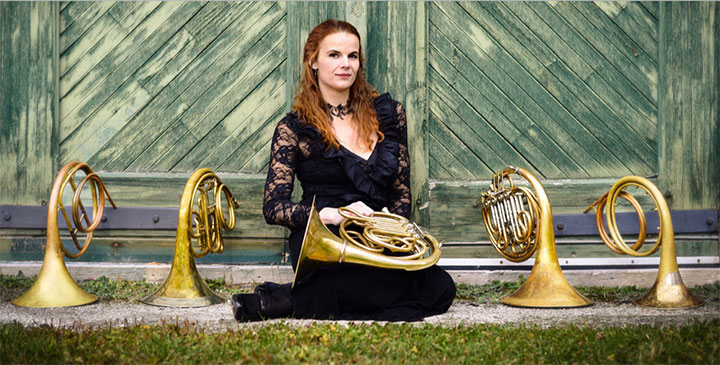 Well, it took me quite a long time to figure it out since I had copied the cassette without the label!!! When this whole universe opened up for me, I could not stop listening to Mahler's music for decades! I went to Mahler's house twice and visited his grave.

When I finally discovered Wienerhorn (Vienna horn) it was a total revelation!!! Its gorgeous, lovely, heroic sound creates a unique bridge between the sound of old horns and the modern horn. It's somehow for me the best compromise possible. I bought my first Vienna horn in 2005 when I was asked to play with the Erste Frauen-Kammerorchester in Vienna.

I chose a youthful Anton Webern’s “Two Pieces” and transcribed them for horn because they evoke this lovely " fin de siècle” nostalgia  of Romantism in Vienna...

Born in Montreal, Marjolaine Goulet graduated from both the Music Conservatory of Montreal (Price, John Milner, 2001) and McGill University (John Zirbel, 2003). She has been the recipient of a number of awards and honors, including a prize in the Paxman Young Horn Player International Competition, a McAbbie Foundation grant, the SOCAN Award for Best Performance of a Work in the Canadian Symphony Orchestra Competition, a fellowship at the Aspen Music Festival,1st prize in the brass category of the Canadian National Music Festival, and more. She is associate solo horn of the Orchestre Symphonique de Québec and has also toured widely with groups such as the Montreal Symphony Orchestra and the Jeunesses Musicales World Orchestra.

As a soloist, she has appeared with the Orchestre Symphonique de Québec and with the orchestra of the  Lanaudière Festival, and she has collaborated with ensembles in Germany and the USA. She is passionate about historical brass interpretation. She plays natural horn, Baroque horn, and hunting horn, and has participated in several recordings on historical instruments.