Horns for Rhinos - Outreach for Conservation 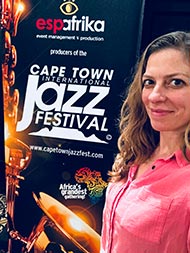 As I often tell my horn students, you never know where one gig will lead. This one started with jazz in Africa, so you can trust that it’s not a common tale…

In March of 2018, I had the incredible opportunity to travel to South Africa to perform at the Cape Town International Jazz Festival with Miguel Atwood Ferguson’s Suite for Ma Dukes (the music of legendary hip-hop producer J Dilla). I had always wanted to go on a safari “someday”, so being an opportunist in travel, my jazz gig suddenly landed me at a beautiful yet rustic safari lodge in the Greater Kruger National Park area of South Africa. I booked myself on a 3-night safari, not knowing what I was getting myself into. My guide for the safari, Willem Pietersen, was curious about my varied career in music, but was himself a wealth of knowledge about every plant, tree, insect, bird, and animal we encountered. He was so invested, I would’ve assumed guiding was his main career goal, but we discussed the necessity of diversification in building a life around your passion. In music, this often means gigging, teaching, and auditioning while working other jobs as well. For Willem, constructing a career in conservation meant juggling several other major projects while working as a full-time guide. Willem and his brother, Joe Pietersen, had a few other irons in the fire - namely, they owned Nkombe Rhino, a non-profit protecting rhinos from poaching. They were also producing and hosting a 13-episode television documentary about conservation efforts throughout the country. The series, released this past spring, is called Veldhelde  (“Field Heroes” in Afrikaans). Not your average side-jobs! Needless to say, after having an incredible time on safari and making such interesting new connections in Africa, I stayed in touch after returning home and had no idea where that first “gig” would lead.

In early summer, Willem put me in touch with his brother Joe, the founder of their rhino non-profit. Again, the diversification of careers comes into focus, as Nkombe Rhino began as a side passion project. Joe is actually a well-known professional rugby player in South Africa, his main career for years. As luck would have it, Joe had just accepted a contract with the San Diego Legion, a Major League Rugby team (yes, rugby is a new pro sport in the US just this past year!) and will be playing and coaching there off and on for the next two years. I met with Joe and his family on their trip in July. After learning more about what Nkombe is doing to protect rhinos, and the harsh realities of poaching in South Africa, I decided I wanted to get involved. I immediately set to work raising money for their upcoming rhino dehorning event - a process all conservationists hate to have to do, but which is a successful poaching deterrent. In order to protect the rhino from poaching, a dehorning team tranquilizes it from a helicopter, and under a veterinarian’s care (the rhino is monitored and given oxygen), they trim the horn as short as is safely possible. The process is painless and does not harm the rhino - it’s just like trimming your fingernails. The horn grows back within about two years, then the dehorning needs to happen again. Dehorning an entire population of rhinos in an area puts them on an even playing field, as they mostly use their horns in battles for dominance. The risk of these dehorned animals being poached is greatly reduced, yet it is not foolproof. Sadly, poachers will still kill a rhino just for the small amount remaining.

If you’re not familiar with the dire situation of rhino poaching, it’s interesting to learn a few facts. The horn of a rhinoceros is made of keratin (the same found in our nails and hair), scientifically proven to have no medicinal value. Rhino horn is sold on the black market in China, Vietnam, and other East Asian countries. Its purported uses are everything from curing cancer to hangovers, from being an aphrodisiac to healing snakebites. Although it has long been an ingredient in traditional Chinese medicine, China has since banned its use, and traditional medicine now offers an alternative. Rhino horn has become an increasingly valuable commodity in Vietnam. Worth more than gold or cocaine, it is a status symbol of wealth. 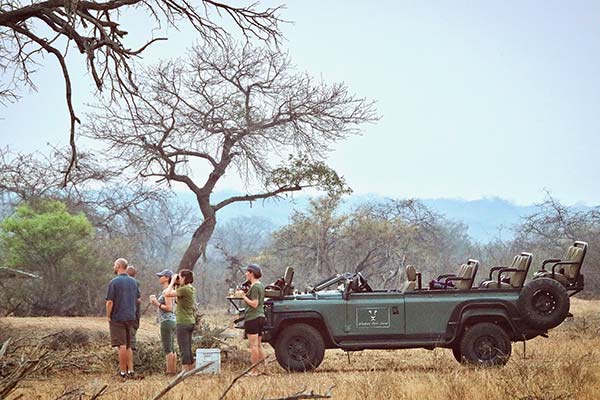 While there are 5 different species of rhinos, all are endangered. 80% of the White Rhino population lives in South Africa, where Nkombe Rhino is based. Successful anti-poaching efforts have slowed the rate of poaching from its peak in 2014, but even at the the current rate, rhinos may be extinct by 2025. Approximately 3 rhinos are killed for their horns every day. The best way forward in the war against poaching is a subject of debate, but one critical element is the establishment of Anti-Poaching Units (APU). These rangers are highly trained to protect rhinos, patrolling game reserves on foot through the night: hiding out, tracking down poachers, and looking for evidence to convict them. Nkombe Rhino trains and sponsors a very successful APU of their own.

Through my fundraiser, I was able to raise almost $3000 for Nkombe’s dehorning event. The many friends who took an interest in this cause inspired me greatly. People asked me more questions, and I had to find answers; as with horn and music, one of the best ways to learn is to teach! The more I learned about the generous efforts of so many good people and the family-like network of conservationists in Africa, the more I wanted to experience it in person. Nkombe is also invested in fostering conservation through tourism. Rather than just asking for donations, Nkombe Rhino now organizes customized safaris for guests - pairing them with eco-conscious, conservation-minded companies and guides for the trip of a lifetime: traveling with purpose. As one of the first groups to be a part of Nkombe Travel (www.nkomberhino.org/travel), Joe planned an incredible trip for us that embodied this spirit and surpassed all our expectations. Our group for this weeklong South African adventure in September included LA-based horn players Emily Reppun and Victor Pesavento, and San Francisco-based horn player Alicia Mastromonaco. The Horns for Africa Safari was born.

For the first three days, we camped (very comfortably) in the bush, ate meals cooked over the fire, heard lions roaring throughout the night nearby, and covered a lot of ground tracking lions, elephants, and many other animals on foot with our armed guide in addition to nightly game drives. It was such an incredible feeling to “live in the bush” with these wild animals. Elephants greeted us at our camp on the banks of a picturesque river while rhinos and crocodiles occupied the waterhole a short distance away. The nightly symphony of insects, frogs and calling animals broke at dawn with a beautiful chorus of African birds, seemingly singing to wake the sun.

Next, we spent a day at the Nkombe Rhino Base Camp and got to meet the head of Nkombe’s Anti-Poaching Unit, Tim Parker, who has been in conservation for 30 years. Tim gave us a personalized tour of the camp, including the simple accommodations and training facilities for their APU rangers. We talked at length about their comprehensive efforts in anti-poaching (including education and legislative initiatives) and got to spend some time up close with a wild rhino and her calf. These were not rhinos accustomed to close human contact and feeding at a sanctuary, but rather wild ones on the vast reserve that Nkombe operates on and protects. To see the passion of Tim and the others at Nkombe was truly inspiring- the tears in this tough, rugged man’s eyes as he explained the realities of their fight against poaching made quite an impression. This is not easy work, but the team at Nkombe Rhino is dedicated tirelessly to it - not just for the future of rhinos, but for the balance of the ecosystem as a whole. If I had to pick one takeaway from this whole trip, it would be recognizing the incredible interconnection and careful balance that exists among the plants, animals, climate, and people in the ecosystem… and therefore the entire world. Remove one element, and the balance is disrupted.

For the last 3 days, we embarked on a more traditional lodge/driving safari. We had the entire lodge to ourselves, with meals cooked over the fire by our Nkombe friends and guides. It was truly a family bonding experience, and the African lodge staff became part of the family as well, even inviting us to sing and dance with them around the fire. Joe and the rest of Nkombe were excited to have four musicians as guests and had asked prior to our trip if it would be possible to bring our instruments. It was during this time that we filmed a little horn quartet music video in the bush! In honor of our new friends, Vic arranged the poignantly beautiful South African national anthem, Nkosi Sikelel’ iAfrika, which brought instant goosebumps, tears of pride, and lots of singing whenever we began to play it. Instead of traveling with four horns on this short trip to Africa, we brought 1 horn and multi-tracked each of us playing our parts separately. 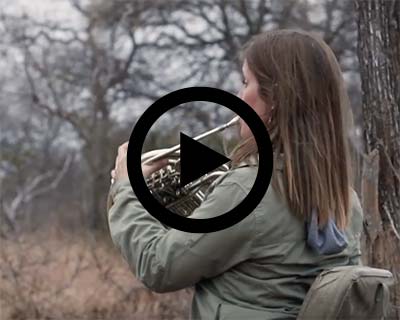 As the sun sets each evening, game drives take a brief intermission from animal viewing by stopping at a picturesque spot to enjoy a cocktail and snack while witnessing the dusty red-orange African skies transition to the magical blue-grey of dusk. By the time everyone has enjoyed the camaraderie of this “sundowner” stop, night sounds and stars engulf you. The rest of the game drive continues in the dark, in heightened anticipation and awareness. On the final night, guide Martin Meyer aptly chose Sunset Dam as the backdrop for our sundowner stop. A hippo kept a curious eye on us the whole time from the center of the pond. We brought the horn with us in order to play and film short clips for the music video. Alicia was the last to play. While she played, as if on cue, three rhinos (including a baby!) came to drink at the water’s edge on the other side of the pond. It was truly awe-inspiring. We had assumed any animals nearby would have been scared off by the foreign sound of the horn (as well as all the laughter!), but these three rhinos joined us across the water, enjoying their own sundowner drink and observing the odd gathering. We were there filming with the 3 partners of Nkombe Rhino, recording music to honor their conservation efforts and their pride in South Africa. The presence of these severely endangered animals was both humbling and inspiring. We left Sunset Dam that evening with full hearts.

And the music Alicia was playing that brought the rhinos to the water? Strauss and Brahms- proving rhinos are horn players after all.

Perhaps the best part of this wild story is that it is only the beginning. In the near future, we are planning to organize brass groups to play the Star-Spangled Banner for Major League rugby matches to gain support and raise awareness about rhino poaching. I hope to organize benefit concerts to raise money and awareness for Nkombe Rhino, all under the moniker “Horns for Rhinos”. So far, I have interest in concerts in LA, San Diego, San Francisco, and Washington DC. If you’d like to be involved in any way - writing/arranging music, performing, planning a concert, offering a venue, or even just donating, please contact me directly at nkombehorns@gmail.com. In addition, if you’re interested in taking a conservation-minded safari through Nkombe Travel in the future, please contact me to be connected!

Who knows where this may all lead, but it’s clear that one gig has led to a new passion for this horn player…