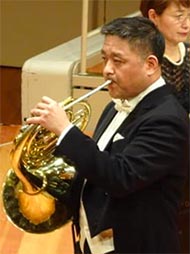 My name is Seok-Jun Lee, and I was born in 1971 in Seoul, South Korea. I graduated from Yewon Middle School of the Arts, Seoul Arts High School, the College of Music at Seoul National University (where I studied with Dr. Young-Yul Kim); and I earned the Diplom and Konzert Examen certificates from the Folkwang Musikhochshule in Essen, Germany (as a student of Frank Lloyd). I have served as principal horn of the Korean Broadcasting Systems Symphony Orchestra (Seoul) and as guest principal horn of the Düsseldorf Kammerorchester while I studied in Germany. I have been invited to perform with JHS in Japan and the Tokyo Ensemble (directed by Chang-Kook Kim), and I was also invited to give a recital and masterclass at Illinois State University. I have been a soloist at the Jeju International Wind Ensemble Festival (Korea), and I held a recital and masterclass at the Shenzhen International Horn Festival (China). I have played in collaborative performances at the Seoul Arts Center Classic Music Festival in 2005, 2015, 2017; and I have given recitals annually since 2001 in the Seoul Arts Center Recital Hall. I have also given solo recitals at the Berliner Philharmonie Kammermusiksaal since 2009 and played in collaboration with the Berlin Kammerorchester. I have been invited to play as a soloist and to give masterclasses at the Asian Horn Festival in Japan in November this year, and I have my upcoming annual solo recital planned for December, 2018.

I am currently professor of horn at the Korean National University of Arts (Seoul) and a member of TIMF Ensemble and the Solus of Seoul Brass quintet. Additionally, I am one of the judges for the Jeju International Wind Ensemble Festival.

In my teaching, I emphasize basic skills. I have the students breathe naturally and exhale so as not to be rigid. They are also required to practice numerous scale and arpeggio patterns. I teach them to play so as to let the musical lines flow naturally for each etude or solo; but I also teach that it is important to play with precise pitch and rhythm. (translated by Namjoo Park Harcrow)