The Horn in Jazz History: 100 essential recordings for the Hornist 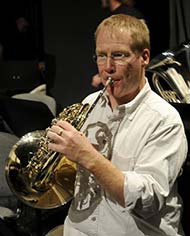 The following is a brief synopsis of the presentation given at the International Horn Society’s 50th Symposium. The intent was to introduce the audience to a sampling of the wide variety of musical situations the horn has found itself in over the last 100+ years. Since this space does not allow for an exhaustive or thorough overview, what follows will hopefully provide some basics for further exploration.

Often, a traditional education for hornists lacks any kind of basic overview of jazz history and more significantly, how correct performance practice (to use a classical term) applies to the diverse styles found within the idiom. As outsiders, we occasionally hear something played in a jazz style and think ”oh, that’s nice” but then return to playing and listening to music that our instrument is most associated with. Or we play the wonderful music of Alec Wilder, Doug Hill or some Fripperies and believe that we now have gained all we need to know about playing jazz style music. One can argue, in these situations, that most hornists have never seen the deep, jazz forest through the slightly jazz influenced, classical trees. Where does one start to discover the multitude of musical situations throughout jazz history that have included our instrument? Fortunately, almost the entire history of jazz music has been thoroughly documented through recordings. While performances of jazz certainly do involve on-the-spot improvisation and large sections of music that are never written down, recordings can still give us solid documentation of a moment in time in the development of the music.

The accompanying pdf list of 99 recordings (88 KB) is intended to give players a starting point for finding historically or musically significant tracks. The list is divided into 3 sections: the horn in big bands and orchestras, the horn in small group situations of less than 10 players, and the hornist as group leader. 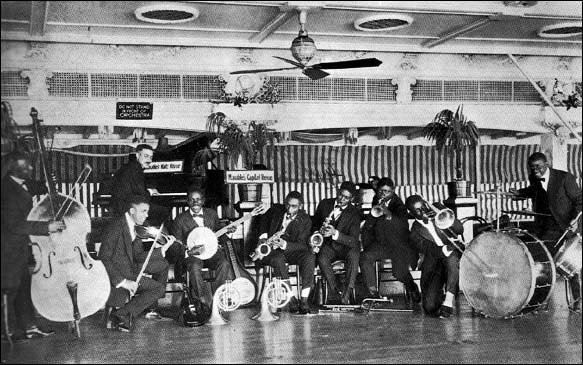 The first appearance of the horn in jazz is uncertain. However, it would make logical sense that it coincided with the origins of jazz in the American South around the beginning of the twentieth century. We have no recorded or visual proof of this, but we can assume that when the other instruments of the brass family made the transition to the new type of improvised, popular dance music, the alto voice (horn, mellophone, alto horn) may have also been present. Publicity photos from around 1920 show bands posing with elaborate inventories of instruments that occasionally included horns or mellophones. Whether the performers actually played these instruments or not is unknown. However, recording session documentation would suggest that they were not.

It was not until late into the Swing Era (late 1930s-1940s) that actual proof of horns being used in jazz performance exists. However, in most of these situations, the horns were grouped together with extra woodwinds and strings and were relegated to playing pseudo-romantic, lushly arranged music for dancing or accompanying star vocalists.

One important exception to this was the band of Claude Thornhill. During the late 1940s, he added two horns (John Graas was one of them) to the permanent instrumentation of his orchestra. Through the innovative arrangements of Gerry Mulligan, Gil Evans and others, the traditional colors, range and tonal possibilities of the horn were being applied in real jazz music for the first time.

Following this trend, the Stan Kenton Innovations Orchestra of 1950 also included two to three horns. Concurrently came their addition to the big bands of Kenton arrangers Pete Rugolo and Johnny Richards. A flood of big bands with horn sections followed with well-written horn parts from Los Angeles/Hollywood arrangers (Billy May, Henry Mancini, Neal Hefti, Michel Legrand, Chuck Sagle, Oliver Nelson). Not only was the music written for the horns of a high quality (there was also plenty of sub-par writing too!), but the players on these recording are some of the best known from the golden era of the Hollywood studio system (Vince DeRosa!). Also of note at this time is arranger Billy May, one of the first to try the concept of an all brass big band, entirely replacing the sax section with a horn section. Arranger Patrick Williams would also repeat this feat, three decades later in New York. Speaking of New York, a big band scene flourished there in the 50s and 60s. Several band leaders and arrangers recorded significant projects with horns, including Thad Jones, Dizzy Gillespie, Gil Evans, Oscar Pettiford, and others. Arguably most important was the big band of Quincy Jones. He wrote for the one horn in his band in new and creative ways. The horn player’s name: Julius Watkins…more on him later. 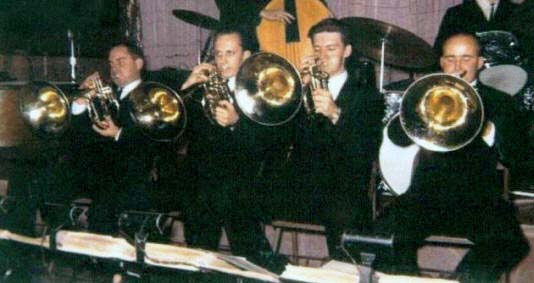 A very important tangent to the horn in the big band story is the Stan Kenton Mellophonium Band of the late 1950s and early 1960s. Kenton himself developed the forward-facing mellophone with the help of the Conn Instrument Co. and designed it to have some of the traditional characteristics of the horn. The intention was to fill the widening range gap between the trumpets and trombones in his band. The arrangements written for this instrumentation brought us music where the mellophone section is treated equally in importance to the saxophones, trumpets and trombones. Since the much maligned (and out of tune) mellophone never really received acceptance from players or listeners, orchestral horns have performed most of these pieces in recent years. However, these compositions and arrangements have provided us with a substantial amount of well-written parts, becoming a model for what can be achieved in the big band idiom.

Certainly worth mentioning is the writing of many of the big band composers and arrangers who have included horn in their palette over the last few decades. Even back in the 1970s, Canadian Rob McConnell already had two horns in his group at all times. Others have followed this example with either one or two horns in their standard big band instrumentation: The Mel Lewis Jazz Orchestra, The Vienna Art Orchestra, the Ed Partyka Band, the Gil Evans Orchestra (yes, again!) and others.

The birth of bebop and modern jazz in the 1940s helped create an entirely new arena for the horn. The first major breakthrough for horn in small group writing came in 1949 with Miles Davis’ ”Birth of the Cool” project. Davis, Gil Evans and Gerry Mulligan collaborated on a concept that created a scaled-down version of the Thornhill big band using alto and baritone sax, trumpet, horn, trombone, tuba, piano, bass, and drums. This instrumentation and its variants became quite popular in the early 1950s, especially on the West Coast of the US. The Gerry Mullligan Tentette, the Shorty Rogers Jazz Giants, the Dave Pell Octet and the Jazz Lab Band of hornist John Graas are just a few examples. All of these groups featured the lighter, softer tones characteristic of the ”Cool School”, the mellow sound of the horn fitting perfectly into the mix.

Also around 1950, the horn began to surface as a participant in smaller jazz combo performances and recordings. The horn appeared not only for its tonal qualities in ensemble passages, but also emerged for the first time as a true improvising, solo instrument. Improvised modern jazz solos on the horn were previously seen as impractical due to the inherent difficulties of the instrument. However, by the 1950s a few players began to devote the time, energy and practice needed to become proficient jazz soloists. These include Willie Ruff, David Amram, Jimmy Buffington, John Graas, Junior Collins and Bob Northern. However, the most proficient and prolific was Julius Watkins. 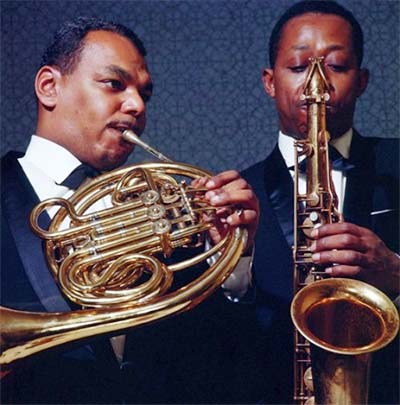 Watkins started his career by playing in big bands. After moving to New York to finish his schooling at Juilliard, he started to become a part of the freelance scene there. Soon, he became involved in recording projects with modern jazz giants such as Milt Jackson, Sonny Rollins and Thelonius Monk. Word quickly spread about Watkins’ ability as a jazz performer and improviser. This led to his collaboration on well over 100 recordings as a soloist and sideman. Significantly, it opened the door for other hornists to show that our instrument is truly viable in the medium. Another important contribution from Julius Watkins was his co-founding and leading of the Les Jazz Modes quintet with tenor saxophonist Charlie Rouse. In the four years the band was together, they recorded six albums and performed in New York and other American cities. The sound of Les Modes was distinctive, with the horn being the prominent voice, accompanied by Rouse’s tenor and sometimes wordless soprano voice. 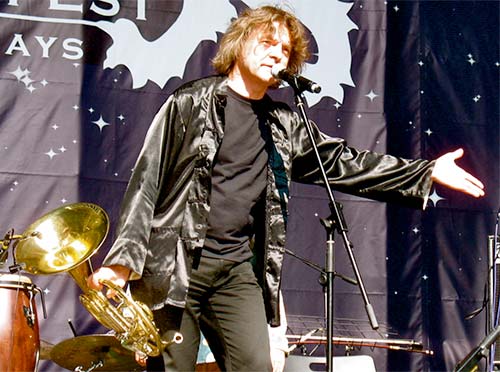 Watkins’ contribution cannot be underestimated; we can trace the direct lineage from his career up through the performances and recordings of players like John Clark, Tom Varner, Alex Brofsky, Vincent Chancey, Claudio Pontiggia and Mark Taylor. Others too, have come over to jazz from classical or orchestral careers (Peter Gordon, Arkady Shilkloper, Adam Unsworth, Giovanni Hoffer). Arkady Shilkloper has shown us the endless possibilities for the instrument through his constant changes of direction with each recording project he undertakes. Still others have come from the studio scenes of Los Angeles or London (Rick Todd, Ken Wiley, David Lee, Jim Rattigan). All of these players have made significant contributions either as prominent sidemen, improvising soloists, or group leaders. The recordings in which these players and many others have appeared cover a tremendous variety of settings for the horn in many differing jazz styles and sub-genres.

Thanks to modern technology and the internet, most of the recordings on the list are easy to find. I’ve included a small sampling of links to give you an idea of where to start:

I hope this article and attached list will provide you with a jumping-off point for further exploration into this wonderful music and our part in it as hornists! Please listen and enjoy!

Dr. Steven Schaughency has performed with internationally recognized jazz artists such as Quincy Jones, Chuck Mangione, Diane Reeves, J. J. Johnson, Clark Terry, Paul Winter, Dave Brubeck, Rob McConnell, the Ed Partyka Big Band and others. In addition to being a former member of the US Air Force Band, he has performed with various orchestras in the US and Europe, taught at the secondary and university levels and adjudicated jazz festivals. He now continues to work as a freelance performer and clinician in Europe, teaching jazz styles to classically trained musicians. Steve received his Doctorate in Jazz Pedagogy from the University of Northern Colorado, where he also taught Jazz History. His teachers have included Louis Stout, Jack Covert, Jack Herrick and Jerry Peel.