The Legacy of Arnold Jacobs

an Interview with Michael Grose from The Brass Herald 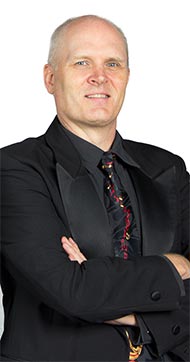 Arnold Jacobs (1915 – 1998) had the reputation as both the master performer and master teacher. He taught tuba at Northwestern University in Chicago and all wind instruments in his private studio. He was one of the most sought-after teachers in the world, specializing in respiratory and motivational applications for brass and woodwind instruments and voice. His students include many in orchestras and university faculties around the world. Jacobs never published any books about his teaching, but some of his students have written books.

Michael Grose, Professor of Tuba at the University of Oregon and former Arnold Jacobs student, has contributed to the legacy of Arnold Jacobs by producing more than 50 interviews with colleagues of former students of Jacobs. You can find these on YouTube channel TubaPeople TV.

This interview is a truncated version of an interview, used with permission, from the Brass Herald.

How were your studies with Jacobs?

My studies with Jacobs were amazing. They were substantively unlike any other teacher I had. In each and every lesson, he was able to effect positive change in my playing. Each lesson I left sounding significantly improved, but over the course of the week that improvement faded somewhat. Then the same thing would happen during the next lesson. It was a process of two steps forward in the lesson and one step backward during the interval before the next lesson. Over the course of time, the trajectory was upward. He was a most remarkable man, musician, and teacher. He was able to stimulate astonishingly positive change in the level of playing from most of those who sought him out.

My lessons were non-systematic in nature. In other words, there was not a clearly defined curriculum from one week to the next. It was more his reacting to what I was doing with my playing at the moment. Over the course of time, though, he covered most of what needed to be covered, but it was done in a manner that was more natural. He was meeting me where I was at the time and leading me to the next stage, as opposed to putting an artificial curricular template on me and forcing me through it.

There was plenty of encouragement to sing, buzz, breathe more efficiently, and to be a storyteller in sound. With me, early on, he would often talk about how I needed to be a motor nerve musician as opposed to a sensory nerve musician. This is where his use of the term “paralysis by analysis” came in to play. He equated motor nerves with exclamations points, while sensory nerves were to him like question marks. He was very much in favor of focusing the thoughts on the end product. Conceptualizing sound, phrase, etc., was a huge part of his teaching. The reason for that is he knew that when a concept is developed in the mind it is much easier to be successful on the instrument by imitating the concept. He often said, “You should have two tubas: one in your thoughts and one in your hands. The tuba in your hands should be a mirror of the tuba in your thoughts. The tuba in your thoughts, that’s the important one.” He told me that he did not care if I made a mistake while playing the tuba, but that he very much cared about what I was thinking when such a mistake happened. “Finding out what you are thinking when you a make a mistake is important.” Anyhow, it is the motor nerves that affect our environment. When I am talking I am using motor nerve activity, but when I am reading I am using sensor nerves in order to gather information. He said the nerves are (in general) one-way streets. One cannot gather AND dispense information simultaneously in any meaningfully successful manner, which is why people easily become paralyzed while they are analyzing.

Have you found out from all the interviews specific things about Jacobs teaching?

In each interview, there is usually at least one nugget of individualized information which Jacobs gave that person, and often more. If I can help to uncover at least one personalized nugget, then I consider the interview to be a success.

Did he for instance change his approach over the years?

My personal opinion is yes; his pedagogical approach did change over the years. I think this can be seen in the swapping of his famous slogan from “wind and song”, to “song and wind”. It was during the late 1980s that he made the change. He became simpler in his approach to communication later in his career, contrasted by the lacing in lessons of medical terminology in prior years and decades. This question regarding the evolving of his pedagogy is why I have worked hard to interview as many students from as many different decades as I can. Trombonist, Robert Rada, from the 1940s, is the earliest student I have interviewed, and his observations are very different from those of later generations. Of course, there is the question, did Jacobs’ pedagogy change or did the student change? I do not discount the validity of the latter, but based upon the data I have gathered, I tend to think it is the former. I think his teaching changed.

I am looking at whether or not compiling a companion book to accompany the TPTV interviews would bring clarity to the information found in the interviews themselves. A colleague of mine in the University of Oregon College of Education recently pointed out to me that not everyone reads books, not everyone watches videos, and that I should seriously consider writing some sort of attendant book that would help to illuminate the data found in the videos. I am also continuing to conduct additional interviews. I am trying to assemble as many pieces of that Jacobs pedagogical pie as possible.