Some thoughts on coming to IHS 50 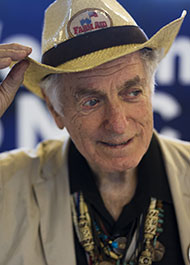 I am REALLY looking forward to coming back to IHS again for their Big 50 celebration. My very first IHS as a panelist-composer-jazz player, was held at Ball state in Muncie, for their SIXTH season, in 1974…44 years ago (!!!!) I remember meeting Frøydis, Barry Tuckwell, Fred Fox and other great players for the first time and having a memorable time surrounded by an army of killer horn players of all ages, who all shared a love for the instrument and for music and hadn’t succumbed to becoming ego-maniacal soured victims - but rather were friendly, enthusiastic and LOVED music!!

I’ll never forget seeing huge rooms jammed with French horn cases and late night-early morning non-stop music and philosophy sessions with the people whose horns were getting some sleep in that sea of cases while we all sat up, after the last horn had been put to bed.

And I remember a group of young hornists who said that I should join them. Since they knew from my bio that I was brought up on a farm and milked cows, I should join them for some fresh air and beer in a field close to the University. When we got to the field and began drinking the beers that were packed in the trunk of one of our unofficial tour guides, I noticed some hornists creep up to a sleeping cow and push it over. This was the first time in my life I had ever seen what I was told was “cow tipping”

I did a workshop called The Blues in F, invited everyone to bring their horns, and shared all that I had learned. Now 44 years later, I’m still doing it, and hoping I can pass on some BASIC ideas of how to harness the creativity that we are all born with, use the technique we acquire to execute the treasures of classical music, AND by improvising with others in ALL genres of music, to show that there IS life beyond Kopprasch!!

We are all composers and improvisers, and all of us have a song and a story and something unique to offer until it is stomped out of us!!

By starting out with playing the 12 bar Blues (whose roots are basically built on three chords) you can spend a lifetime and never get bored, using this as a start to endless learning about all kinds of music.

When Dizzy Gillespie and his quintet all crashed out at my basement apartment on 16th street in 1951, I was playing extra horn in the National Symphony, working part time as a gym teacher at the Ecole Maret, getting a degree as a History major at George Washington University, playing with Buddy Rowell’s Afro-Cuban/Jazz band, and leading a sextet that played Renaissance music, transcriptions of pieces by Thelonious Monk, Lee Konitz, Charlie Parker and Dizzy Gillespie, and improvising without any restrictions. When Dizzy’s band all went out to get some lunch, (after my ice box had been cleaned out) Dizzy sat down at my old upright piano which I used for my attempts at composing and said, “Get out your horn. Let’s play something before you go to your gym teaching gig.”

I got out my horn and he said “What would you like to play?” I was terrified. Why would Dizzy ask me what I would like to play??"

"How ‘bout some Blues?” I mumbled

“What key?” said Diz. Again I was amazed that he would ask me what I wanted to do.

“Let’s hit it,” said Diz, and he began to play Charlie Parker’s “Now the Time.”

I knew Dizzy from that time until he left us years later, and I came to realize that he ALWAYS tried to make everyone who crossed his path feel comfortable and worthy, whether they played music or not. And his generosity of spirit and showing us that those of us who were musicians and composers always had to be ambassadors for music, share what was bequeathed to us by others, as Dizzy expressed it  - “Put something back in the pot.”

In 1951, there were no schools to learn jazz, except for what I call the University of Hangoutology  (of which I am a lifetime undergraduate). Since Julius Watkins was the only jazz French hornist who had his own band back then (in 1955 when I moved to NYC and began playing with Mingus, Julius and I began to play together and were the two improvising French hornists of the era).

I hope that everyone who comes to my sessions can bring a pencil and paper. I’ll share a few SIMPLE things that all hornists can do; using a keyboard as a TOOL to find the right notes we all search for! And I’ll encourage all horn players to compose concert music if they choose to and also to collaborate musically with folk musicians and accompany authors and poets when they read their own work, as I did for 12 years with Jack Kerouac.

And I’ll hope to learn more about how to play the horn, as I always do at all the IHS events I have been lucky enough to be invited to. And I’ll volunteer to play assistant 26th horn for any of the gigantic mass choirs or if there is another jazz big band where the saxophones, trumpets and trombones are all replaced by French horns!!!

Big hugs to all and back to the grindstone completing the last movement of PARTNERS: A Double Concerto for Violin, Cello and Orchestra.

And practicing to get my chops in shape to be able to be in the company of all the maestro and maestra French hornists, who will save the world.

This email address is being protected from spambots. You need JavaScript enabled to view it.
www.davidamram.com
www.twitter.com/David_Amram

Trailer of the film "David Amram: The First 80 Years"

Pay per view of the film "David Amram: The First 80 Years”