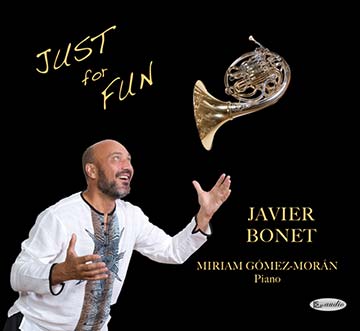 "Vision of Spain" is a monumental series of 14 paintings by Spanish master Joaquin Sorolla" commissioned by millionaire Archer Milton Huntington for the Hispanic Society in New York.

In the recital "Visions of Spain, A Horn & Piano Soirée," Javier Bonet and Miriam Gómez-Morán will present their own vision of Spain, throughout a very uncommon chamber music ensemble: french horn and piano.

A very original program which will encompass not only one of the most characteristic pieces for this ensemble such as Adagio & Allegro by Schumann, but also the American premiere of Juan J, Colomer's work "Visions", followed by a very challenging and interesting part: a selection of pieces of their last CD "]ust for Fun", presented in America for the first time. Transcriptions of pieces originally written for voice, violin, cello or piano by Turina, Ravel, Granados, Piazzola, Cassadó or Sarasate among others. All these will require the grandest virtuosity and lyricism from the horn, not only technically but also in sound and color.

All in all, "Visions of Spain, A Horn & Piano Soirée" is a different view of the Spanish musical flavor, connecting the folklore to the contemporary, throughout a marvelous couple formed by these two instruments.

IHS members: log in to see your special 20% discount code for tickets to this recital!