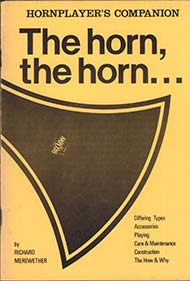 I was delighted to hear the news from Tim Jones, principal horn of the London Symphony Orchestra, that Richard Merewether's book "The Horn, The Horn..." is to be republished in 2018. I was involved with the original publication in 1978 as Sales Manager of Paxman Horns. Dick (as he was always known) was, of course, the brilliant and innovative designer for the London-based company. Fluent writer that he was, my main task was to mop his brow occasionally! In my ten years with Paxman (during which they went from a relatively obscure company to one of the top horn makers in the world), I worked increasingly closely with him and was privileged to form a friendship with him, which I value to this day.

Dick's forebears founded the town of Merewether, which is part of Newcastle, a town famed for coal production north of Sydney. He started playing the horn at school with an Italian teacher on an instrument made by Rampone & Cazzani, which was "not too bad...", according to Dick. He was being urged to go into the family business as he approached his mid-teens, but rebelled quite forcibly, eventually persuading his parents that he wished to pursue music as a career. Subsequently he was accepted to study at the "Con", later to become the Sydney Conservatoire. The instrumentalists there became the founders of the modern Sydney Symphony Orchestra, as there was an acute shortage of experienced musicians in Australia after WW2. As a result, in 1946, at just 19 years of age, Dick found himself as 2nd horn to Englishman Charles Gregory, former principal horn of Sir Thomas Beecham’s London Philharmonic Orchestra, which had been disbanded for the duration of WW2.

Whilst at the "Con", Dick became great friends with a violinist from Melbourne called Patricia Tuckwell. Her younger brother Barry, encouraged to play the horn aged 13, became 3rd horn of the Melbourne Symphony Orchestra at 15 and then 5th in the Sydney Symphony. Both Dick and Barry were influenced by Charlie Gregory's lovely playing and by his and his wife Beatrice's tales of the opportunities for performing in London and the UK. When the Gregorys returned to England in 1950, Dick went with them to a new and exciting life,Tuckwell following a year later. 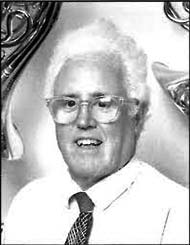 Coming from a well-to-do family, Dick was able to survive comfortably in a post-war London that was trying to recover from the ravages of war. He began to pick up work and to get to know how the horn scene worked in the great city. Charlie Gregory had many contacts and was quickly able to re-establish himself in the musical world, becoming principal at the Royal Opera House, Covent Garden and a professor at the Royal Academy of Music. It was 1959 when, as a young horn player at the Royal Marines School of Music, I was sent to Charlie for lessons at his London home. Some years later, Dick told me that often he, Beatrice, and the Gregory children were waiting to have tea once "The Marine" had been taught!

1958 was the year that Dick, now well-established in the London professional ranks, took a horn he had persuaded Alexander, the German horn makers, to make to his own design, for some modifications to Paxman, the horn makers at 36 Gerrard Street in London's Soho. Thus began a close association between this uniquely innovative designer and a group of highly skilled craftsmen. Within a year, a new large bore bell-taper and mouthpipe had been produced. The first Single f-alto horn and Bb(A+)/f-alto full double horn appeared...and weight-reducing hollow rotors made by Paxman's talented valve-maker, Fred Leach, made their appearance. Dick's semi-obsession with the French system of ascending 3rd valve soon became an option offered on all the growing number of models available. The double descant version was particularly popular amongst film and session players and in the Royal Opera House, all of them enjoying playing alternative fingerings (eg. F#, G and C#, D on valves 2 and 3 and 3) with clarity and sureness of tuning.

During the 1960s, a medium bore size was introduced, and in 1967 the first F/Bb/f-alto full triple horn was made, a compensating version following two years later. Paxman's reputation was slowly beginning to grow in the USA and Europe but, in true British tradition, they were somewhat disparaged in the home country! I joined Paxman in January 1971. Being known to many young and up-and-coming professional players, I gained the confidence of some of the LSO horn section, amongst others.They were interested in a more transatlantic tone spectrum and, seeing that we needed to produce instruments able to compete with the ubiquitous Conn 8D horn, I suggested making an even larger bore size. Dick, an inveterate medium bore man, was resistant initially, but I was persistent. With Bob Paxman in agreement, the new XL bore size was produced and became a bit of a marketing sensation...blowing our waiting lists into the distant future!

Watching Dick at work was fascinating as he was a superb draughtsman and no mean artist and cartoonist. He would set himself up in the tiny basement office at 14 Gerrard Street, drawing all his designs freehand and life-size on the back of wallpaper then measuring the results carefully with string. As I watched him one day, he suddenly cursed in frustration as he had drawn the instrument half an inch short! He was utterly meticulous about every detail of every horn and would test each instrument himself before its final polish and set-up...and again just before it went to its new owner.

Dick was born with Marfan Syndrome, whose sufferers are tall and thin with long limbs, fingers and toes. He was a smallish man sitting down ... but 6ft 3 inches when he stood up! Another symptom is weak eyes, which became all too obvious when he detached a retina playing high horn parts with the English Bach Orchestra. With the eye repaired, he was allowed to play...only to detach it again the next time he played. His specialist then told him that if he persisted with his playing career, he would undoubtably go blind. Dick sadly and reluctantly retired from the profession he had loved for 30 years.

The one good thing that emerged from this tragic occurrence was that Dick was able to work full time at Paxman. He threw himself into the design of our new Covent Garden premises which, with our combined inputs, emerged as a strikingly attractive twin-level showroom with generous workshops attached. As the 1970s progressed, Paxman's reputation grew with horn production and output expanding rapidly...but the waiting list also grew, with customers waiting up to 15 months for their horn to be made! We were asked to exhibit at various events and started with a bang at the 1976 1st International Brass Congress held in Montreux, Switzerland. It was here that the seeds of the British Horn Society were sown with Barry Tuckwell's promise of full support.

In 1977, we were at the IHS Symposium in Hartford, Connecticut. A month later Dick, my wife, and I drove across Denmark to a village called Ry (pronounced as though coughing up a throat obstruction!) for the Scandinavian Horn Seminar. Hosted by Jesper Allin (1st horn and conservatory professor in Esbjerg), the artists were Frøydis Ree Wekre, Ib Lanzky-Otto, Peter Damm, and making his first appearance as an international recital artist, 24-year-old Frank Lloyd. Adding to this talented bunch of horn players was an 18-year-old Finnish horn player called Esa-Pekka Salonen who, for some unknown reason, took up conducting! Anton Alexander attended, and he and Dick had their usual fun. This included, as he fiddled with flashbulbs in his trouser pocket whilst chatting, Dick going off in a series of mini explosions with much accompanying smoke!...alarming but causing Dick no damage.

1978 found us in East Lansing, Michigan for the IHS Symposium with British artists Alan Civil, Frank Lloyd and Neill Sanders. Other stars there included Phil Farkas and Dale Clevenger. The next year there was a big event in Paris hosted by the French government and the 11th IHS Symposium in Los Angeles. 1980 saw us in Germany's Black Forest for a big European event. Dick was unable to attend this last event as he was starting to experience health problems. He had developed diabetes, which he was able to control by being very strict about his weight, but in mid-1980 it was discovered that he had bowel cancer. From Germany, we anxiously awaited news of the operation to remove "a good semitone's worth" of bowel, as Dick told us. I took a 17-year-old horn player to the Black Forest event to demonstrate and generally assist Bob Paxman and myself...his name was Timothy Jones. Whilst we were there, Tim was offered his first ever job in a German orchestra. This kick-started the stellar career of one of the world's outstanding players!

The publication of "The Horn, The Horn..." by Paxman in 1978 had aroused much interest. I remember well the American musical academic ribbing Dick for writing it in "delayed Victorian"! This delighted us all, including Dick, and from then on every time he went to his desk to write a letter, he would call out, "I'm off to do a bit of the delayed Victorian"!

As the 1970s progressed, many orchestral horn sections and individual players visiting London came to Paxman to drink our   (bad!) coffee, transact their business with us, swap stories, and generally chew the fat. The "White Lion" pub, around the corner near the Royal Opera House, became well known to many of those visiting, and I'm sure many horn players will have appreciated Dick's witticisms and words of wisdom. I left Paxman at the beginning of 1981 after 10 eventful and exciting years and took up two teaching positions in Cambridge. This quickly developed into a 6-days-a-week career, reducing down to 2 days for the final 7 years before retiring aged 70.

One Thursday evening in 1985, the telephone rang. It was Dick giving me the sad news that Charlie Gregory, who had long retired to the beautiful Cornish village of Mousehole (yes, really!), had died. Exactly one week later, Bob Paxman phoned to tell me of Dick's tragic death...and the light illuminating the world of horn playing became a little dimmer.