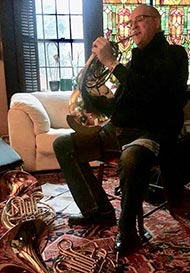 In 1989 when i came to Gran Canaria to play principal horn with the Gran Canaria Philharmonic (www.ofgrancanaria.com), I also immediately started teaching at the orchestra academy. I had the privilege to coach some very talented students, including Antonio Hernandez (currently principal with the municipal wind band of Las Palmas) and Raul Ortiz (currently principal and my colleague in the Gran Canaria Philharmonic). During their studies they also were appointed as apprentices with the orchestra,as part of their training, gaining valuable playing experience with a professional orchestra (normally playing 2 weeks a month, performing at least one work from the subscription program, an opera, school concert etc.)

I introduced them to the marvelous book, “The Art of French Horn Playing” by Philip Farkas and other great books. I made them go to hear all our concerts, and also visit the annual Festival de Musica de Canarias (Canary Islands Music Festival, which is held each year in January and February. There they could enjoy the greatest orchestras such as the Berlin/Munich Phiharmonic orchestras, The Bavarian Radio Symphony Orchestra, WDR Sinfonieorchester, RSO Frankfurt, NDR Sinfonie-Orchester, the New York Philharmonic, Cincinatti Symphony, Cleveland Orchestra, Montreal Symphony, Vienna Philharmonic, Boston Symphony, etc. etc.

Masterclasses were organized when great hornists came to the island, including Radovan Vlatkovic, Vicente Zarzo, Rodolfo Epelde, Ab Koster, Michael Thompson, Javier Bonet, and others. It is extremely important, I think, to hear different orchestras/players and recordings, helping to shape one’s concept of sound and style. This never has been easier than it is nowadays with the help of YouTube and Spotify.

Afterwards, I also taught for years at the Conservatorio Superior de Musica de Canarias in Las Palmas, where former students Abel Perez (Norske Oper in Oslo) and Alicia Sanchez (Stuttgarter Philharmoniker) were a joy to coach.

In the end, my opinion has been always been the same: having talent is not enough. Talent, combined with discipline and hard/continuous work is the only way to be successful.

Jose Zarzo studied in The Hague with Vicente Zarzo and Martin van de Merwe. He was a member of the Spanish National Youth Orchestra and the European Community Youth Orchestra. In 1989, he became principal horn with the Orquesta Filarmonica de Gran Canaria, with whom he has toured and recorded extensively. He teaches at the Orchestra Academy and the Conservatorio Superior de Musica de Canarias in Las Palmas. His solo recordings appear on the Crystal and Summit record labels.