My Return to the Triple 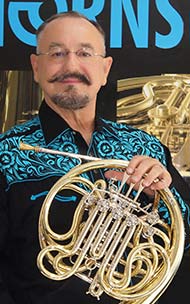 My first encounter with a triple horn was as a college freshman. I had enrolled at Baylor University to study with Bill Robinson. At the time, all I could afford was a Selmer double. Prof. Robinson had just acquired 2 Paxman triples, I’m not sure how, and offered to let me play one of them. It was an instant love affair. Mind you, it wasn’t about playing high notes. I’ve always been blessed with a decent high range. What was it about the horn that made so much sense to me? I think the best way to understand it is to look at what I did not like about the double horn. You don’t really know what is limiting about a double until you learn to play a triple.

Recently, I had the very same experience. I played a Paxman triple during all of my years with the American Horn Quartet. When I began playing with that venerable ensemble, I was playing an Alex 103. The members of the AHQ strongly recommended that I switch to a triple horn. They claimed that, given the sort of repertoire and length of concerts we would be performing, I would soon see the advantages of such an instrument.

Last year, shortly after the AHQ retired, I began to long for a double horn again. the double felt so light in my hands. I felt the vibrations coming off the instrument better. It was sort of like driving a sports car after years behind the wheel of a Winnebago.

However, after a while, the limitations of the double horn began to make themselves known. After six days of 6-hour recording sessions in the orchestra, on the last day, I was faced with extremely delicate, soft and stopped passages on a piece. It was tough going for me. One of my colleagues, who was playing a triple, showed me how much easier that particular passage would be using the high F side. I tried it, and the notes popped right out.

Following that incident, I was performing a chamber music concert which involved the horn spending a lot of time up on top line F, G, and A above it. On the double I was playing, the A was just not reliable and way too high using Bb horn 1&2 (or 3). Open was the only choice, and it was slightly too low. I found myself attempting tricky technical passages around these notes, having no valves to use and a flat top A. It was okay - I managed. But later after trying that same piece on a triple horn with its plethora of possibilities, it was so much easier. And because it was easier, I didn’t have to worry about just getting the notes or about intonation problems. I could actually play the passages with panache and style, applying tasteful and historically informed nuances to the performance.

I noticed in another performance, one involving a horn ensemble, that I really wanted to save myself for some juicy solos later in the piece. Unfortunately, I had to keep playing because my accompaniment notes were important to the harmonic development. I had learned a trick playing all those years in the AHQ: you desperately need a rest so that you are ready for the juicy melody, or so that you can properly pull off the climax of the piece. On the accompaniment chords, I would switch to the high F side, even though the notes were in the middle and middle low register. Of course you have to choose fingerings that are in tune. But the notes in that register on the high F side are a mile wide and speak instantly. I could rest my chops while playing as well as give my concentration a small break. After a few lines of this low input/sufficient yield playing, I was able to switch back into high gear and go for the climax.

Another example of this, but in a different context, is in the 3rd movement of Mahler’s 4th symphony. Just before the glorious “paradise” section in that movement, where the horns are called upon to give their all with bells up, the 1st and 3rd horns have to play a couple pianissimo high A’s. The orchestra is tired and playing very softly, the conductor is conducting with his open palm towards the winds, and you just want to regroup and think about that glorious passage coming up. Playing a pp high A with dubious intonation on a double horn is hard enough. But it was a cinch with the triple. I was playing 3rd, so I was obliged to find the 1st horn’s high A. Having about 5 different fingering possibilities at my disposal made my life infinitely easier.

It is often surprising to double horn players to hear that triple horn players use the high F horn to play extremely low notes. One time it really saved my life was at the end of the slow movement of the Schubert octet. The horn ends the movement playing repeated eighth notes on a pedal low G. I am primarily a high hornist, so having these notes pop out so effortlessly using high F 1&3 was such a relief. The sound on the high F down there is sometimes not so great. You have to pick your moments, but if you are required to hit the note with an accent or staccato, it is very reliable.

Here’s an interesting one for those of you who have played Beethoven 9: the fun 2-horn bridge into the 2nd movement that comes a couple of times - you know - 4th space E - down an octave - 2nd space A - down an octave - and then back up 2 octaves, etc., all very rapidly - you can play the whole thing on high F 1&2, except the low E. It pops out more or less effortlessly.

I won’t go into the high register advantages of the triple horn. As I said, I have always had decent high chops, so I don’t think much about it. True, recording the “horn variation” on the Haydn “Horn Signal” symphony with the ever-so precise and stylistically perfect Sinfonia Varsovia would have been a lot more difficult without the triple horn!

But I think “precision” and “style” are the key words here. I want to play the notes perfectly. Yes. But I want to be able to play them stylistically and ensemble-wise perfectly as well. Playing the horn is not a sport. We are part of the fine arts. What do we love about the paintings of Monet? It’s the gorgeous attention to color, style, and execution. And the Ballet Russe - immaculate execution of tiny nuances and extremely difficult physical movement. When we are faced with a masterpiece like Bach’s Brandenburg Concerto No. 1, the Schönberg Kammersymphonie No. 1, Debussy’s La Mer, or the eternal Brahms Horn Trio, we want to be able to produce not only a note-reliable and ensemble-perfect rendition, which is what we can probably do on a modern double horn. However, we are obligated to bring every musical interpretation by these master composers to life - rich and teeming with style, good taste, subtle nuance, and panache. And that’s where the triple horn wins the day.

Sure, I love having the double horn in my hand. It feels like a return to my Ur-roots. But in the end, despite the weight of the thing, and the different resistance of each of the horns, I elected to go back to a triple.

Kerry Turner is a household name around the world as a horn player and composer. His numerous recordings and performances with the American Horn Quartet and the Virtuoso Horn Duo are a testament to his artistry, and his works are performed every week on every continent (with the possible exception of Antarctica). He is also the new owner of Phoenix Music Publications.