On the Vienna Horn 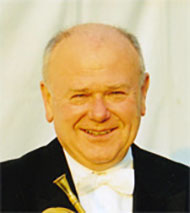 As a lifelong musician and as first horn of the Vienna Philharmonic (in Vienna there’s no “solo horn”) – as well as professor at the Music University in Graz, sound was and still remains the most important component of music making.

As most people know, the outstanding importance of the Vienna F Horn lies less in its technical possibilities than in the tone quality – the smooth slurs in particular are appreciated and admired.

Where does this “Vienna Horn Sound” quality come from?

The softness of the sound, on the one hand, has to do with the length of the instrument; more overtones are able to vibrate, and through this the sound is richer. The diameter is another component in this formula. Additional factors include the way to blow the air through the horn as well as the articulation, which mustn’t be too hard. And of course it’s also about the slurs that can be so especially lovely on the Vienna horn.

Most people believe that the possibility to play such smooth legato comes from the valves, but this is not true. The quality of the slurs lies in the length of the pipe between the mouthpiece and the valves. The length of the air column from the mouthpiece to the valves is around 1.60-1.80 meters (63-71 inches); in contrast, the Bb horn (on the double horn) is around 20-40 centimeters (8-16 inches). Such a short column of air obviously cannot become as compressed as nearly 2 meters’ worth – the longer tubing is more flexible. It’s because of this that the slurs on the Vienna horn sound so velvety. –But you also have to know how to do it, how to blow the sound as well as how to “lead” the airstream over the slurs. (All this you must “practice, practice, practice…”)

However, the form of the mouthpiece (with the emphasis on the inner dimensions) is a little different then for a double horn; it’s less bulgy, less barrel shaped, more like a funnel. This depends on the shape of the “soul” of the mouthpiece, the middle part (the “soul” is the cylindrical part of the mouthpiece), and on a Vienna mouthpiece this is very long and concludes at its end once again in a funnel shape.

There are also certain variables – on the instrument as well as the mouthpiece – that are responsible for the different sound and method of playing. In addition to this comes the transmission of tradition from teacher to student; see Hans Swarowsky, 1979, who in his book “Preservation of Form” (page 258 in the German edition), emphasizes how valuable it was to him that so much direct tradition was passed down to him (for example, the cultivation of song, going back to Johannes Brahms).

Most conductors highly treasure the horn sound of the Vienna Philharmonic. Here’s a little anecdote from my everyday professional life with one of the (for me) most important conductors, Nicolaus Harnoncourt: A horn player cracked a note unmistakably in a rehearsal. (It was probably me.) Immediately, the cellist sitting in front of him turned around confrontationally. Right away, Harnoncourt – who seemingly wanted to defend the horn player – stopped the cellist with these words: “Don’t turn around! Your colleague is playing on the F horn – not on a double horn, that you…um…that you…um, er, that you can buy anywhere.”

Enough with the anecdotes. Frequent “clamming” is of course the trade-off for the otherwise celebrated sound quality. Because of this, neither can the F horn compete soloistically nor technically with the double horn.

So why do I give so much worth to the Vienna horn?

Well, in the Romantic era, almost everything is written for the valve horn in F, which was, back then, the most commonly available orchestral instrument. I play (and teach) it because of the already addressed tone quality and beauty of sound.

I’d like to emphasize the importance of transposition skills – thus the ability to read the parts in their original keys!

In my view, it is immensely important to play the orchestra and solo parts from the scores in their original keys. You can then more easily recognize the original “stopped” and “half-stopped” tones – and musically interpret them accordingly.

In conclusion, I would like to give students one more piece of advice for the road: Don’t go to too many courses with different teachers! Every one of them will have a different point of view. You will be more confused than enlightened.

A good teacher needs (roughly) at least 1 to 2 months to be able to judge all the strengths and weaknesses of a student. A horn course, in contrast, is usually over in 10 to 14 days. There are students who “collect” courses the way other people collect stamps. And then they wonder why a longer-term success evades them.

About me: I was born on July 16, 1943, in Vienna. At age 13, I received my first instruction on the horn at the Conservatory of the City of Vienna with Prof. Franz Koch (Wiener Symphoniker). A few years later, I began my serious studies at the Music Academy with Prof. Leopold Kainz (Vienna Philharmonic). There followed after this a few “learning years” with smaller orchestras in Austria. In 1965, I came to the Vienna Folk Opera as first horn, and a short time later, to the Vienna State Opera in the same capacity. In 1971 I also became first horn in the Vienna Philharmonic.

In addition to my orchestral activities, I played in several chamber music ensembles, including the Ensemble Wien-Berlin. I took over as professor of horn at the Music University in Graz in 1982 and taught there until 2011.