Andrew Pelletier: What is your horn story?  What brought you to the horn? 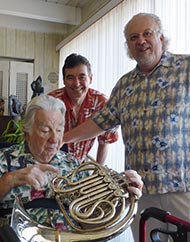 James Patterson: I started the trumpet in junior high band camp but switched to the tuba to play in the advanced band. Later in high school while working on the Wilder trio for horn, tuba and piano, the sound of the horn caught my ear. So, I switched to the horn in my sophomore year.

-What brought you to the craft of building?  Did you come to it via repair and customization?  Did you apprentice with anyone?

I've always had an interest in how things work, especially musical instruments. While in junior high school (middle school) I regularly took home various instruments, cleaned and oiled them and tried to learn how they worked. I re-padded a flute and a baritone sax and whenever an instrument needed repair, I volunteered to take it to shop where I watched the repair tech and subsequently learned about instrument repairing. While in college I did repair work during the summers, and after my University experience I was offered a job working for Robert Atkinson. This was the first time I worked as a specialist building and modifying horns. After that I got a “real” job working in the aerospace industry. I worked my way up the ladder and ended up as a manufacturing manager with 29 people in my department. Of course, I continued playing the horn, doing some recording work and freelancing. After ten years, I really wanted to return to the music business, so I started working as an independent contractor at Bob Malone’s Brass technology shop. I quickly became the top horn specialist in LA; that was where I honed my skills and began to think about my own designs.

-When did you make the shift to horn builder?  Was it a moment in time, or did it evolve gradually?

When I left the aerospace job, I started getting a lot of performing work, especially recording. But the industry was shrinking quickly, leaving me with a lot of time and opportunity for horn design. I started spending more and more time working on horns. I was the go-to guy at Bob Malone’s Brass Technology in Van Nuys, CA.  There was definitely a day when It became obvious that I needed to open my own shop. So, In the mid 90's I parted ways with Bob Malone's shop and began Patterson Hornworks. One of the first things I did was to take a class on natural horn building with Lowell Greer where I learned the skills needed to make my own horns. Initially, I focused on building natural horns, complete crook sets and sheet metal mouthpieces. I really enjoyed making these horns and was able to perform regularly on the natural horn in the LA Baroque Orchestra. I was also doing a lot of horn rebuilding and customizing as well as mouthpiece making.  As I continued to learn the fine points of horn design, I developed my own leadpipe and first branch tapers. From there, it was an easy transition to building the whole horn.

-Are there any particular builders of the past that have been an inspiration for you? If so, who?

I’ve always been curious about all horn makers but especially Kruspe, C.F. Schmidt and Alexander. Later, I came to know American makers such as Lawson, Geyer, Lewis and Rauch (who actually had his first shop about 2 miles from my first shop).

-Could you detail your current production?  How many people involved, how long does it take to create an instrument?

Currently our production is 40 horns per year. Our team includes myself, my wife Cora who does the final assembly and polishing, my son Phil who builds the valve blocks, helps with the assembly and manages the production schedule, and Luis Perez, who is also a computer programming student at NMSU. He fabricates the tubing, makes small parts, and helps with polishing. 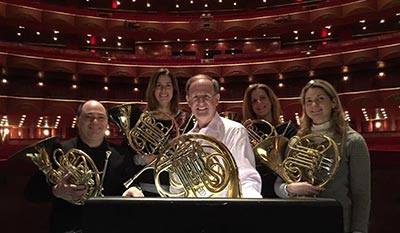 A repair story... I had just rebuilt the valves of a special one-of-a-kind Paxman horn and was being very clever using the lathe to clean up a spot. The lathe was not my friend that day, and it caught the valve in such a way as to tear the delicate hollow valve in half.  This was a valve that is not made any more, so I had to solder it back together and make new ports. It took about 30 hours to bring it back together and plate and refit it. Came out great and still works perfectly 10 years later.

We have also customized some unusual instruments. We have been making a mellophone conversion where we make a new leadpipe that uses a horn mouthpiece. I think about 50 schools have these now, and they really work well with a better sound and intonation. We have also made the two tapered metal tubes after the bocal for the contrabass bassoon. This produces an incredible improvement in tonal center. Perhaps the most unusual is a valve section for the Alp horn. A famous Hollywood producer (John Boylan, Eagles, Linda Ronstadt, others) asked us to make this horn for a Swiss pop artist named Eliana Burki. She has a band and tours all over the world and needed a few more notes from her Alphorn.

My main mentor is Vince DeRosa, who at one time played everything I made. Since he played a Kruspe model horn, (Conn 8D) this was the first horn I designed. There was a time that he played one of my horns and told me; “this is the horn everyone’s been looking for”.

There have been many movies where our horns were played. Joe Meyer bought the first horn I made in 2001 and just played in the 89th Academy Award Show. Brian O’Connor, who we lost last year, sadly, also used several of our horns and was a avid supporter of our horns. Together Brian and Joe played all the episodes of Star Trek, the next Generation, Deep Space 9, and Voyager. Virtually every movie score from 2002 to 2015 has one or more of our horns.

The descant horn was developed with and for Jamie Hersch for use in a piece written by Jamie’s brother Michael. The work is titled “Last Autumn” and is scored for Horn and Cello. It is an extremely difficult piece with 33 movements taking 2 hours to perform. Jamie needed a special instrument on which to perform it. (Michael Hersch is a fairly well known composer and has received numerous commissions and awards and is the Chair of the Composition Department at Peabody Conservatory).

Our Geyer Model came about with the help of our good friend Nancy Joy, who had been playing on our Kruspe Model for quite a while, but wanted to see if a Geyer-style horn would suit her better. This led to designing a completely new set of tapers for our Medium, Medium-Large horns. We have since developed another version of the Geyer with William Caballero. We call this our “R” configuration.

The Triple horn was developed initially with Gabriel Kovach, who is principal horn with the Phoenix Symphony. He prefers to perform on the Triple Horn but was unhappy with many of the horns available. After playing our double horn and our descant, he very actively encouraged us to combine the two horns into a triple. Subsequently we developed a slightly different model with Julie Landsman, using our Large tapers. So, there are two distinct Triple Horn models, both of which are very successful.

The Knopf model allowed us to create a horn that feels similar to the Geyer but is more ergonomically compact and fits in a standard case. This horn has a beautiful, warm sound. We were very honored last year when the 5 players in the NY Met Opera chose to switch to Patterson Horns. Two Triples, two Geyer’s, and 1 Knopf.