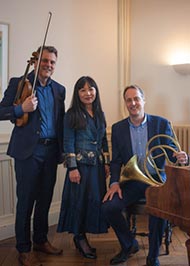 For a long time, recording a solo CD was on my bucket list. In my years as solo horn in the Gelders Orkest (Arnhem, Netherlands) I made many recordings of the large orchestra repertoire: Mahler 5 and 6, Tchaikovsky 5, and many others. Furthermore, I recorded the horn concerto by Mercadente with the Amsterdam Police Band for the Molenaar label. But a solo CD didn't come at that time, mostly because I didn't know where to start and which pieces to choose.

In 2013 I quit my job. It wasn't going well with my orchestra because of heavy budget cuts, and it wasn't going well with me. I wanted something different. I took a sabbatical, and through the medium of the Millereau natural horn I had purchased from Lowell Greer, I found my way back to the joy in music. Soon my calendar was full of natural horn engagements. I found myself playing with fantastic groups such as the Orchestra of the 18th Century, the Apollo Ensemble, Anima Eterna, and many others. I also got an expanded position with the conservatory in Zwolle and started another project I'd been thinking about for a long time. I wanted a company where enthusiastic natural horn players could find a good selection of historical instruments.

During a rehearsal of the Brahms Horn Trio (on natural horn), the violinist said to me, "We really should record this!" And thus my old wish emerged once again in all its enthusiasm! I thought it over, did some research on crowdfunding platforms, and calculated the minimum amount the whole thing would cost.

The pianist, Riko Fukuda, had access to a variety of magnificent historical pianos. Her husband is Edwin Beunk, owner of fortepiano.nl.

To make a CD these days is fairly simple, as long as you have the budget for it. I had to keep it as cheap as possible without sacrificing the quality I had in mind. For the crowdfunding, I set a realistic goal: 5000 EUR - not enough for everything, but definitely a good start. I simply wanted to try it and see if it worked. I did a lot of advertising on social media, especially on Facebook, and wrote several emails to friends, family, and acquaintances. When you are asking for money, you have to be ready for rejections; you'll receive a lot of them. But there were also surprises. A rich friend pledged a large sum, and through that, the crowdfunding was already a success in advance.

You're asking people to support a project before it's even started. As a reward, you promise a CD, a concert ticket, both, or whatever else you can dream up. Of course, you have to be able to deliver what you promise! On top of that, the project has to be interesting. In my particular case, I called the project "The Natural Horn in the 19th Century." I started with the Beethoven Sonata from 1800, then the Brahms trio, and at the end the Rossini Prelude, Theme, and Variations. This last piece hadn't been recorded very often on the natural horn.

Contact was made with a technician and recording engineer. Edwin Beunk made his space available and took care of the pianos (for each piece a different instrument!) Riko Fukuda and Frank Polman played for free; they were also keen to record the Brahms.

Meanwhile, I got in contact with the record label with whom the Apollo Ensemble also worked, Centaur Records. They were interested in hearing the recordings once they were finished. Afterwards, they approved the recording, and I sent the photos and text for the CD.

We had three days to record. That wasn't very much time. You have to bear in mind that before even one note is recorded, you will have already played a lot. I was in good shape and had prepared well, but at the end of each recording day I was exhausted, both physically and mentally. Recording is tiring work. The Beethoven and Rossini recordings went fairly rapidly. The Brahms is much more difficult to record. You need a lot of time and a sound engineer with super ears. In my case, I was short on time, and the sound engineer was sitting too close. That's something to learn from for next time!

A CD label doesn't pay you or invest anything in the project. The risk is too great for them - the classical CD market is saturated, and fewer and fewer people are buying CD's. Even at Centaur records, you have to take on at least 200 CD's at $6 apiece. On top of that, you have shipping costs and European customs fees. You should therefore be fairly sure you can sell so many CD's to justify the costs. In my case, I can sell them on my website, through a colleague, or at various instrument builders whom I visit frequently through my business. I play a lot of chamber music, so I can sell my CD's at concerts. On top of that, they count as promotional material and are therefore tax deductible. Through the purchase of an historical instrument, I can throw in a CD for free.

This is how I hope to make some of my investment back. The crowdfunding brought in 5000 Euro, and the crowdfunding platform cost me 600 Euro. Recording and taking 300 CD's cost an additional 2400 Euro. I was so lucky to have each and every person who helped out - otherwise the project would have been a lot more expensive.

Last week, we played the Rossini and Brahms alongside the violin sonata by Schumann. And the CD was lying there - I was happy and proud! August 4th is the official launch date from Centaur Records. Soon afterwards, it will be available on line.

If you're a horn player whose bucket list includes recording your own CD, I hope you've found something useful in this article. Go make it special!

You can hear Stefan’s virtuoso natural horn playing on YouTube