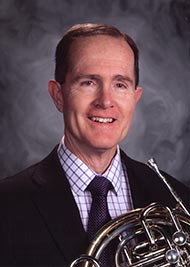 Some of the most amazing things that happen in your life come as a total surprise. That is exactly what the success of my YouTube channel has been. As of this writing, I have over 5500 subscribers and almost 2 million views! I have received emails and other correspondence from all over the world.

As a horn player, I am a late-bloomer. I graduated with a Music Education degree in 1980, and, although I was always first chair and had a full-tuition music scholarship, I had no desires to play professionally. In fact, after college, I put down my horn completely and worked in the financial services industry for almost 10 years. I was lured back into the music world through an invitation to play horn in a pit orchestra for a church production of “The Sound of Music”. (A serendipitous event!)

Soon after, I left the world of high finance to becomes a public-school band director and community orchestra horn player. The first midi accompaniment I made was of the first movement of the Hindemith Horn Sonata to help a student prepare for a school district “Solo & Ensemble” festival. This proved to be very helpful for her and she received superior ratings at both the district and later, the state level. This lead to the making of additional accompaniments for myself and my students.

In 2000, I decided to make a CD of some of my favorite music for family and friends. Some of the pieces are a part of the horn literature, like Ravel’s Pavane or Franz Strauss’ Nocturno. But many of the pieces were arrangements of church hymns and Christmas choir music. I called the CD “Love Songs and Lullabies”. It was very well received. Several people told me it was their favorite CD. Others asked me if they could buy copies to give to their friends. (If you are interested in a copy of the CD, send an email to stevehornguru@yahoo.com)

The making of this CD improved my playing dramatically! I discovered, for example, that as I held a long note and got softer, I would go slightly flat right before the release. Recording gave me an opportunity to listen in a very critical way to how I sounded and to work to perfect my playing.

In December of 2008 I got a digital video camera. I had been working on “Le Basque” by Marin Marais, which Dennis Brain famously used as an encore piece. I had also written an arrangement of “Perpetual Motion” by Cesar Cui, and “Csardas” by Vittorio Monti. I decided to record all three of these as an experiment. They turned out OK so, on Christmas Day, 2008, I decided to set up a YouTube channel and post them. The rest, as they say, is history. I was surprised at the number of people who watched them and the positive feedback I got.

On January 11, 2009, I posted “Hunter’s Moon” by Gilbert Vinter. This is one of my favorite performance pieces and I have played it dozens of times for students at assemblies and workshops. When I posted it, the comments that got my attention the most were from students who were working on the piece. They thanked me for giving them an idea of what the piece should sound like. That is when I realized that my YouTube channel could become a resource for students from all around the world. I just needed to record the horn literature. The goal was to make superior quality audio and video recordings that also demonstrated the best playing of which I was capable. As you look through my channel, you can see the evolution of the videos. In the early ones, I am just standing in front of a bookcase. Later, I got some different colored sheets. Eventually I got a green screen and started putting in interesting backgrounds. The quality of my audio recordings also got better as I purchased better recording equipment and editing software.

I also created a companion webpage (www.steveparkhornmusic.net) where people could go to download accompaniments and performance recordings of the pieces on my channel.

This entire process has been very beneficial and enjoyable for me. It has opened many unexpected doors. I have had the opportunity to present and perform at both the national IHS Workshop and several regional workshops. I have been a guest clinician at several university horn workshops in the western United States. Today I do studio recording work on a regular basis. And I am a very busy freelance horn player in the Salt Lake City, Utah area. I play principal horn in several paying orchestras. And I play principal horn in the Orchestra at Temple Square, which accompanies the Mormon Tabernacle Choir on their weekly broadcasts. My playing can be heard on their many CDs and PBS Christmas specials. So, go to my webpage, download an accompaniment, and get to work recording yourself. Good things are bound to happen!

Stop by Steve’s famous YouTube channel and see for yourself! https://www.youtube.com/user/ohsteacher