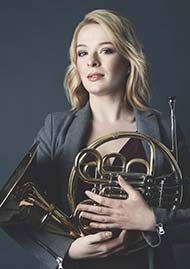 I am Audrey Good, second horn of the Toronto Symphony Orchestra, and fourth horn in the Four Hornsmen of the Apocalypse horn quartet.

Twenty years ago, I was a frustrated piano student who wanted something more…something glorious and shiny that leaks spit onto your favourite pants.

My earliest experience with a live horn was the Champaign-Urbana Symphony Orchestra’s production of Peter and the Wolf. When the hornists stood up at the end and revealed the full glory of their instruments, I fell in love.

How could something so lovely play such an evil character? So dark and haunting…and low.

Despite my newfound conviction that the horn was the key to unlocking my destiny, it took a bit of time to convince my parents that I was serious.  A bit of time…and a rubber hose.

I acknowledge now that it’s cruel to families to teach children that by buzzing on a rubber dishwashing hose, they can achieve a somewhat horn-like stretch of the harmonic series. But armed with this demonstration fresh in my mind, I gained access to our own home’s rubber hose and proceeded to wage psychological warfare on my immediate family.

It’s a passing fling, they said? I wouldn’t continue to practice piano if I played the horn, they said?

My zealous dedication to wrapping the beloved hose around my upper body like a moldy sousaphone proved otherwise.  Sometimes I marched around the house with it, and other times I sat with the poise of a queen, but I gargled through the available intervals daily.

I think the general consensus in our household became “Nothing could sound worse than this.” (They had never heard a beginner hornist.) On my 10th birthday, I met my first horn—a yellow brass, single f Yamaha. It was the most beautiful thing in the world.

Jumping forward ten years, my passion for the instrument continued to grow--things were getting serious. My parents allowed me to begin studying seriously during high school, with Dr. Kazimierz “Kaz” Machala, who was the horn professor at the University of Illinois. He was the first person to highlight the necessity of having a highly functional mid-low range, and I am eternally grateful for that. It’s common for young hornists to subscribe to the “higher, faster, louder!” school of horn technique, because in band music, that’s all you need. Having a head start on developing the lower half of the horn’s register was invaluable to the advancement of my career.

Our first priority in my early studies was to craft smooth, breakless transitions between all registers—the (still) elusive “uniform embouchure”. For the mid-low range, my chosen exercise was playing octaves slurs to low notes…on a borrowed Conn 8D…at the loudest possible dynamic, of course. I usually did this for 3 hours on weekend afternoons.

(As my father turned up the volume on the football game to drown this out, he longed for the dulcet tones of my long-forgotten rubber hose.

Other goals during these years included:

The life event that sealed my love of low playing was simply being in the right place at the right time.  During my undergraduate studies at the UofI, the Four Hornsmen of the Apocalypse horn quartet came to Champaign to pursue various individual degrees. When their fourth horn player decided to leave the group, I was brought in, and my real low horn education began.

It took years for me to figure out how to be a quartet low player—this is a very different and extreme set of skills compared to anything required of us in orchestral literature.

I spent many hours listening to the American Horn Quartet in particular and realized that hornists existed, like the AHQ’s Charlie Putnam, who could play these low parts with the volume of a bass trombone, and then on the turn of a dime, articulate softly in the same register with the crystalline clarity of a piccolo. My new obsession became learning how to approach this bar that had been set.

During the next phase of my studies, I was so fortunate to study with William VerMeulen at Rice University. I jumped into this incredible environment with both feet, and at first, I sank to the bottom.

I was alerted to some pretty bad news right off the bat:

That final point was the biggest realization of my career thus far: I’m just a horn player, plain and simple. I believe we all are. So when I began auditioning for orchestral positions, the mental transition from “specialist” to “hornist” was key.

I’ve been employed full-time as a 2nd horn player now for almost ten years, first in the Charleston Symphony Orchestra, then in the Sarasota Orchestra, and now in the Toronto Symphony Orchestra. I’ve grown to appreciate the challenge of living up to the unique requirements of the position. One week, I’ll play second on Tragic Overture and need access to the big, fat low A I discovered in high school…but then the very next day could hold anything. A Haydn symphony part arguably better suited for trumpet, or perhaps some impressionistic writing that requires me to blend into a perfect unison with the people around me. During my time off each week, I share my discoveries with students at the University of Toronto—puffy low embouchures are strictly forbidden in my studio.

When my lips first met dishwashing apparatus all those years ago, I never could have imagined the diversity my “low horn” career offers me, and I truly enjoy every role I get to play.

I think this is the root of success in our field—finding a way to relish the development of each and every skill required to master our great instrument!