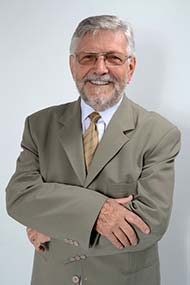 I can consider my life as a music teacher in Brasil as beginning in July of 1968, when I was contracted by Maestro Isaac Karabtchevsky as 1st Horn of the OSB (Orquestra Sinfônica Brasileira), as there was a clause in my contract which required me to teach horn. This is how I began an expansive pedagogical life and a profound relationship with the world of “trompistas” in this gigantic country. At that time, the general level of horn playing was not very high, the instrument was considered easy to fail on, and composers of the time avoided writing significant parts for the horn in their pieces. This was not without good reason - trumpet players who were not good enough were moved to horn, but played the in same manner that they had played the trumpet. The foreigners who arrived after World War II (Italians and Germans complicit of involvement with the oppressive regimes) tried playing horn because it was the instrument that was needed most, even though they had no knowledge or studies on the instrument. The exceptions were rare. The study of the horn had no rigidity or planned structure. I tried convincing aspiring youths to study in an organized way, every day, and with a big emphasis on scales and arpeggios. After some time the more dedicated students started to stand out, making for rapid acceptance by the others. Since I was invited to all of the music festivals all over the country, the method spread, and the number of horn players grew with impressive speed as well as the level of playing. A big help were the presentations of duos, trios, quartets, sextets (and more) that we performed at the university and in music festivals. Whenever possible we try to organize master classes with big names of the horn world -Hermann Baumann, Phillip Meyers, Barry Tuckwell, Vladimira Klanska, Radovan Vladkovic, etc. The number of horn students was probably never as high in Brazil as it is now. Today, the most dedicated and hardest working players have an elevated presence as professors in universities, and as professionals in the symphony orchestras. Unfortunately we are facing a political-economical situation in Brazil that is frighteningly moving forward with the liquidation of cultural and artistic values, with the cruel deaths of various traditional groups. Orquestra Sinfônica Brasileira, a group that has existed for 77 years is closing its doors. In Sao Paulo two groups have been dissolved, and various other Brazilian states have gone through the same problems.

Zdenek Svab received his musical training at the Prague Conservatory of Music (Czech Republic) and his master’s degree in Brazilian Music from the Universidade Federal do Estado do Rio de Janeiro (UNIRIO). He played first horn in the Opera Split (Yugoslavia) and also taught in the local Music school. Active in Brazil as a soloist, professor, and conductor, he was a founding member of the “Sexteto do Rio”, “Ars Musica”, Ensemble do Rio”, “Camerata Amadeus, and “Metal-Transformacao”.  He served as first horn in the Orquestra Sinfonica Nacional da UFF until 1995. Currently he is professor and conductor responsible for the Youth Symphony Orchestra EMVL (Villa Lobos School of Music), and teaches brass instruments, as well as conducting the Orquestra Sinfonica da Casa da Musica in the Faculdade da Licenciatura em Musica of the Candido Mendes University in Nova Friburgo.