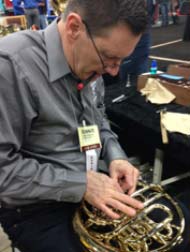 I grew up in Southern California, in a family where music and the arts were appreciated. As a 13-year-old boy, I have one vivid memory of the glorious sound of the horn and how it impacted my life: I was attending a concert at the Hollywood Bowl. The orchestra opened with Tchaikovsky's Symphony #4 (still one of my favorites). I was so inspired and from that moment on, I knew I wanted to play the horn.

The first opportunity I had to learn the horn came a few years later, in the 10th grade, at Los Alamitos High School. Because of my late start, the band director suggested I take a few lessons with the first-chair horn player at the school, Karen Swarthout (who later became my wife!). In addition to Karen, I took private lessons from Ed Jackson and Drew Lowery, two free-lancers in the LA area.

After graduating from high school, I attended California State University Long Beach and began horn study with Fred Fox, a former member of the LA Philharmonic and studio player.

Karen and I both attended CSULB, during which time we also took lessons with James Decker (USC horn teacher and Hollywood studio player). Mr. Decker would often invite us to attend studio calls and we were able to observe the fascinating world of Hollywood studio musicians. Karen and I even had the opportunity to play on a "B" movie soundtrack, "The Hunting Season" (lots of stopped horn and dissonant long tones!). 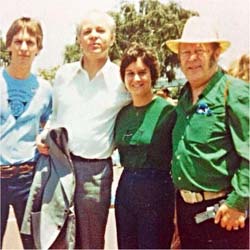 When the 1979 IHS Workshop was hosted by USC, Mr. Decker used his international contacts to bring Vitaly Buyanovskyand Valery Polekh as featured artists, as well as many other famous, well-known horn players! Karen and I were both a part of a student team that was responsible for helping the workshop run smoothly. After a week of amazing concerts, master classes, recitals and lectures, we had the privilege of accompanying many of the guest artists to Disneyland.

After college undergrad – and after marrying Karen Swarthout! – we had miscellaneous freelance and church work and a small teaching gig at an elementary school, but none of this was full-time. At the encouragement of Mr. Decker we applied for positions in Mexico, Venezuela and Colombia. At the same time, we also applied for a Rotary Foundation scholarship to study horn in Germany.

Karen and I flew to San Francisco to audition for the conductor of the Sinfonica del Valle in Cali, Colombia. We were offered “Principal/Second horn” positions on the spot. Even though our son Mark was only a year old at that time, we packed a few bags and flew to Colombia! This job was a good learning experience for us. We played new rep every week, and if the material was something Karen already knew, I played first and she swapped to second. Sometimes we just flipped a coin!

Our entire tenure in Cali lasted just under a year – as I had been informed that I’d been awarded as a Rotary Scholar for study in Germany. Naturally, I applied to the Northwest German Music Academy in Detmold – where Michael Hoeltzel was the teacher. In addition to standard lessons and orchestral training, Professor Hoeltzel conducted an ensemble of 12 Par Force horns. The sound of those instruments was amazing: rustic, rich, wild... I instantly felt a connection to the instrument, nature and our horn heritage! Karen and I introduced Prof. Hoeltzel to Be-bop and he would love to play jazz duets with us at the end of our lessons.

In 1982, after our studies in Detmold, we returned to the US, rich in knowledge and enthusiasm for the horn. Having met a Rotarian couple from Texas while in Germany, Jan and Len McDaniel, we decided to relocate to Wichita Falls, Texas. Karen and I both played in the WFSO and I secured a job at the local airport, fueling planes, in order to provide for our growing family of four. After a year, we began the slow migration southeast, towards Fort Worth.

Eventually, I cultivated a very large private horn studio, teaching in many school districts all across the Dallas metro area. I found teaching to be challenging, yet rewarding. I enjoyed watching my students grow and progress and have fun playing the horn. I think I taught literally thousands of lessons during that time! Over the years I have been fortunate enough to work with some of the finest band directors and band programs in the country! Our family's growth, personal and business success could not have thrived anywhere but here in Texas. This great Texas band tradition was begun by German and Czech immigrants, who formed small community bands in their local neighborhoods. The development and cultivation of those musical ideals have continued to make Texas well-known throughout the country for excellent music programs.

Unfortunately, the income earned by a private teacher is not steady or reliable enough to support a family. One of the band directors for whom I taught asked me if I could clean his school horns over summer break. So I began, in the summer of 1985, to gather as many horns as I could and chemically clean them. I quickly discovered that I could make extra income and do the job better and cheaper than the big music stores in town. Each summer, I accepted more horns, and other brass instruments as well. During the school year, I maintained a full teaching schedule, free-lanced in the area, coached our kids' soccer teams and continued to build and establish relationships with area band directors.

I am grateful that I was able to teach and guide many young horn players, including our own three children, and continue expanding my repair business. In 2003, I made the difficult decision to stop teaching privately and devote all my time energy to developing my repair business. I still have a passion for guiding and encouraging young hornists. But now I have an opportunity to help them choose the instrument that suits them best... and I leave the teaching to my wife! 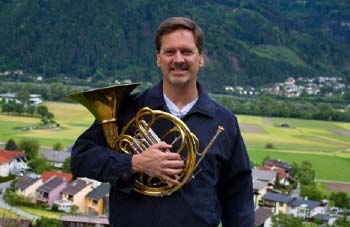 In 2006, Engelbert Schmid contacted us about becoming a US dealer for his horns. This was an exciting opportunity because we started gaining national recognition in the horn world. Shortly afterward, we began to introduce Hoyer horns (B&S Music) to Texas. During the following six years, our business continued to grow and expand. In order to meet the increasing demand of horn players across the country, we built an extension to my workshop in my home in Keller. I continued to do horn repairs, customizations, and draw my own leadpipes.

In 2012, our son Mark, who was playing Principal Horn in the Fort Worth Symphony, collaborated with myself and Derek Wright, who had just finished his doctorate in horn performance at Arizona State, to promote and expand the business further. Our website was redesigned and Houghton Horns established a solid internet presence. After outgrowing the space at my home (even after the added construction) we purchased a building in Keller, about a mile north from our house. Today, Houghton Horns has a dedicated repair shop and a staff of seven! We have really grown!

Even though I didn't continue to take auditions with the hopes of winning a big orchestral job, I have been blessed with many playing opportunities here in the North Texas area. As a member of the WFSO for over 25 years, I have played a tremendous amount of great literature, including Schumann's "Konzertstucke", not once, but twice! Our horn section also performed the Texas premiere of "In The Mind's Eye", by James Beckel. I also enjoy being active in the local horn community, free-lancing and working on the horns of local professionals.

Throughout all of my studies, travels, playing and business ventures, my primary goal in life has always been to promote the horn and its glorious sound! By working on horns and with other horn players, I feel like I am able to advance the capabilities of the instrument. I like to explore ways to improve the acoustics and design of the horn, while remaining sensitive to the needs of each individual player.