A Musical Life in the Caribbean

When I visited my parents in St. John in the U.S. Virgin Islands, I was planning on staying just a while and then moving on. Things did not go as planned.

I saw an ad in the local paper for a position at the local college for a theory/piano instructor.  Although I had not played piano in 17 years, I applied. The music director had seen me performing horn in the local calypso tent with a band from St. John -- “reality” (I thought: grim reality!) -- and he felt this displayed a good attitude toward the local culture, a factor in my being hired.

When this position ended, Caneel Resort invited me to play piano in their fine dining room. Cramming from songbooks led to a decent season as the “dressed-up man playing the piano.” When tourist season and, subsequently, this job ended, I had a chance to housesit on the British island, Jost Van Dyke. This island then had 150 residents (all cousins), no electricity, and no roads. I lived in a simple house on a private beach and went to St. John once a week for an hour of survival-related activities: signing at the unemployment office (a benefit from the college job), getting a check from the post office and cashing it, and buying groceries. This peaceful summer ended when I got a notice of a temporary job filling in for a high-school choir teacher on maternity leave.

Although I had never considered being a public school teacher, to my great surprise I loved the job. The lady never came back, and I stayed…for 32 years! I found great satisfaction in leading memorized performances of the Vivaldi Gloria and Magnificat, Bach Cantata 4, Handel’s Messiah, Stravinsky’s Symphony of Psalms, and other works with a choir in black public school. In addition to choir, I taught brass classes and music theory.

Some singers on St. John, a National Park island with 2,500 residents, asked me to form a choir there. This led to 30 years of concerts, touring to other islands, and many friendships. A choir on St. Thomas and some church groups soon asked me to help them, too. Since I was doing so much choral work, I went to the Westminster Choir College in the summers, taking useful classes. 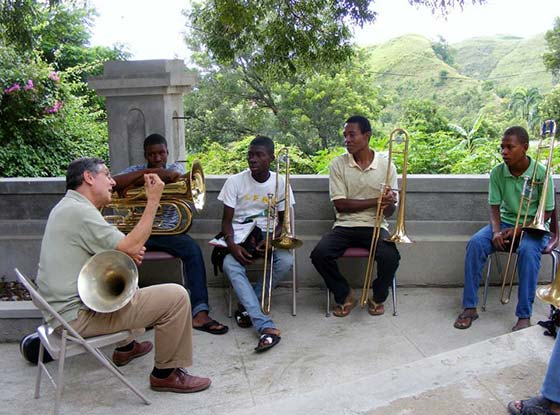 I kept my horn playing alive in groups formed with whoever was living in the islands…horn quartet, woodwind quintet, brass ensembles. I also played recitals in New York and Detroit while stateside as well as in the islands. Regularly playing with the Santa Cruz Brass on St. Croix was a high point most months.

A young Haitian trumpet player on an Easter job in Florida enthusiastically described a music camp in Haiti that his father, a pastor, organized every summer. Intrigued, I wrote to him, and received a reply that I must come and give conducting master classes to all the church music directors. This wonderful experience in 2008 led to meeting people from the two largest music schools in Haiti, St. Trinite in Port-au-Prince and Dessaix-Baptiste in Jacmel. I have visited them every summer since.

Since retiring from full-time time teaching in the Virgin Islands, I spend time in Haiti during the school year. In addition to teaching horn and low brass, I have organized recitals as an accompanist/coach, and I play horn in various ensembles. The St. Trinite School in Port-au-Prince has an orchestra, and I enjoy playing with them; this is my first orchestral playing since leaving the Toronto Symphony. Whenever possible, I have my students do all the hardest pieces. I have soloed with the orchestra and done some conducting, but I am usually in the back row coaching my students. I have also visited the music school in Cap Haitien on the north coast for three week-long sessions and taught at other small music schools across Haiti.

A fellow teacher at the Jacmel music school, originally from Cuba, invited me to visit his family last February. I “sat in” on a Beethoven octet rehearsal with the Santiago de Cuba Orchestra musicians, and this led to an invitation to lead an all-brass concert there. Although Santiago de Cuba has every kind of musical group, there never has been brass chamber music. On February 11, the brass players presented the all-brass “Solo Metales” concert.

The finale of the concert was the first performance of “Suite Cabana Para Metales” for brass and percussion by Ernesto Burgos, a fine local composer. The piece, which I commissioned for the concert, was a huge hit, and the Cuban musicians were excited to play brass ensembles for the first time. We all hope this will be an annual event and that the Cuban players will continue to promote and perform brass music.

Although I have enjoyed many wonderful musical experiences during my years in the Caribbean, with the work I am doing now in Haiti and Cuba, it seems that I have saved the best for last.

Marquis Cahill, a native of Detroit, Michigan, USA, received his training at the Interlochen Arts Academy and the Juilliard School and has been active as an educator and performer throughout the Caribbean for over three decades. He served as Music Director for the US Virgin Islands Department of Education for many years.