Kristina Mascher-Turner: The horn seems to be a popular instrument in Brazil. Can you tell us about how the horn tradition in your country began? Were there well-known teachers or performers who came over and got things started, for instance? 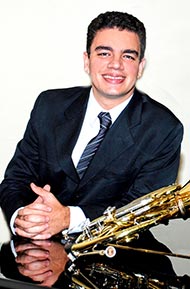 Radegundis Tavares: The French horn started to become a more popular instrument especially in the last decades. Although the first mentions of the French horn in Brazil date from the early 18th Century, the instrument was better known in the orchestral/chamber music world at this time and didn’t become so popular for the general population at first. During the late 19th Century and early 20th century, in comparison to the Trombone and the Trumpet, for example, the French horn was not regularly used in Brazilian popular music ensembles. Many wind ensembles/military bands used to have a Saxhorn in E flat instead of a French Horn. These facts probably made a huge difference especially in the first part of the 20th century, when Trombones and Trumpet became more popular instruments. It started to change especially in the 1980s along with the developing and creation of new orchestras and undergraduate degree courses in public universities. At the same time, classical music festivals were receiving more resources and becoming bigger, and new festivals all over the country were being created. It stimulated more people to choose the horn as their instrument and to explore its possibilities. Nowadays, the horn is more established in Brazil not only in the Orchestral and chamber music formations but also in wind ensembles and military bands. It’s possible to hear some individual initiatives to have the instrument in choro, frevo, samba and other Brazilian music formations, as much as in big bands.

In the last few decades, we’ve had horn players coming from many parts of the world to teach and play the instrument in Brazil, such as Daniel Havens (USA) and Zdenek Svab (Czech Republic) that taught many of the principal horn players in Brazil now. Especially during the 1980s and the 1990s, many Brazilian horn players went to study abroad as well, particularly in the USA and Europe. This had a big influence on horn playing in Brazil.

KMT: Speaking of beginnings, what inspired you to play horn in the first place?

RT: My father was a trombonist and professor at the Music School of the Federal University of Paraíba, in which I did my Bachelor, Master and Doctorate degrees. I had my basic music theory studies there. Then, when I was eleven, he showed me many instruments from which to choose. When we went to see the horn, he explained that there were less horn players in comparison to trombone players and other more popular instruments; because of that, if I really dedicated myself to the horn, I would probably have more professional opportunities. I started to practice the instrument and it was “love at first playing!!” LOL

KMT: I love your transcription of The Carnival of Venice! Have you made other transcriptions? How do you approach making a well-known work your own?

RT: Thanks! Yes, I have been doing transcriptions since I was 14 years old. I used to hang out with trumpet players, and I started to listen a lot Wynton Marsalis and Sergei Nakariakov. They inspired me to try different things on the horn.

At first I was always trying to transcribe the piece by changing as little as possible from the original version. For example, I was always trying to not change the tone, or to play all the notes even if the piece was written for a violin. I realized that the transcriptions sounded better, at least in my opinion, if I did all I thought was necessary to be more natural for the horn. Today, if necessary, I change the key, I “cut” notes, I change small rhythms; if the original has double stops I try to play the one that sounds more when the original instrument plays. And what I found interesting is that to sound more like the original instrument, the “effect” is more important than playing all the notes. In general, I believe the most important thing is to make it sound on the horn as it had been composed originally for the instrument.

KMT: Is Brazil a good place to make a career as a classical performing artist?

RT: I would say not good, not bad. It’s more common to have orchestras and professional opportunities in classical music in the biggest cities such as São Paulo. Some states almost don’t have a classical music environment. In comparison to the US or to many countries in Europe, we don’t have that many musicians. That is starting to change now, but I believe we still don’t have as much competition as in those countries for the jobs you can find in Brazil. During the 1990s and the 2000s, we had an increase in the number of orchestras and musical courses in universities, though some important ensembles have shut down in the last few months. It’s always a “battle” to explain the importance of music and cultural investments. If I’ve heard right, that’s something that is happening in other countries around the world…

KMT: Can you tell us about the campus where the symposium will take place? What are the facilities like?

RT: The Music School is located on the main campus of the Federal University of Rio Grande do Norte - UFRN. The buildings are not so close to each other, especially the Music School that is closer to one of the University’s main entrance. For the Symposium that is a good thing because that means it’s closer to get to shopping malls and to get to the Music School from the hotels. The rector building and the community center (you’ll find banks and other facilities here) are located a 20-minute walk away. The university has a free bus service that can get people to all parts of the campus and to the closest shopping malls. During the Symposium we will be at the very end of the semester. We don’t expect much movement from students of other courses.

KMT: What should participants at the symposium make sure they have packed in their suitcases? 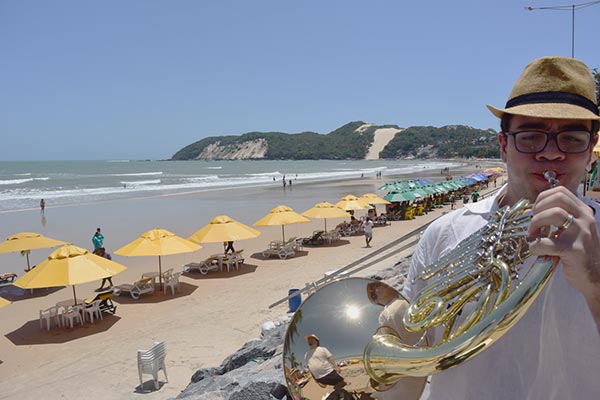 RT: It’s always good to have bug repellent, but I don’t believe they will have this kind of problem in the Music School, Hotels and at the beach – bugs don’t like air conditioners or saltwater. The biggest majority of hotels/”pousadas” (pousada is a simpler and usually cheap kind of hotel) have ACs in the rooms, and the music school building has ACs in all the rooms. Swim Suits for sure!!! We’re planning to have activities on the Ponta Negra beach… We’re preparing a good staff that speaks English to help non-Portuguese speakers, although it is always good to know a few words in Portuguese. We’re preparing a small guide with basic expressions people should know as well as information about the places they will need to be for the Symposium and touristic places they might want to visit.

KMT: What has surprised you about being the host for IHS 49?

RT: I have been preparing first the proposal then IHS 49 itself since 2013. I was in the last four symposia, which helped me a lot in the sense of knowing what we need to make a good symposium. I would not say I’m surprised - maybe “amazed” is the best word to describe my feelings with the people involved in the symposium preparation, as well as their will to make it happen in the best way possible. Thanks to all of you that are helping!!!

KMT: Can you name a few highlights planned for the symposium?

RT: We will have Schumann’s Konzertstuck been played along with Strauss’s Horn Concertos on Wednesday evening (June 28th) with the State Symphony Orchestra, horn solo and big band playing original works and transcriptions of Brazilian Music – Choro, Samba, Frevo and much more! Horn with dance performances of Samba and Frevo – the theme of the Festival is Horn and dance!! Music from Argentina and other Latin America countries, musical activities at the beach and much more!!! I can assure you this is going to be an unmissable Symposium!!!

KMT: Last summer in Ithaca, you kindly demonstrated (on a video for this newsletter) how to make tapioca cakes, a local delicacy. What are some of the other culinary highlights we can look forward to in Natal?

RT: Natal has incredible restaurants. Shrimp is kind of a specialty from the city, and we have a very special restaurant called “Camarões” (this means “shrimps”). This place is really special, and besides shrimp you can have fish and meat dishes – all incredibly special. “Coalho” cheese and “butter” cheese are very traditional from this part of Brazil, and you will probably have the option to eat them every morning at your hotel/pousada. Sun-dried meat is another specialty from this part of Brazil. In Brazil, it’s common to find restaurants that offer what we call “rodízio de carnes”, a buffet with many barbecue options that are offered to you at your table. Natal has some special options of this kind of restaurant as well. To have a cold beverage on the beach on a really warm day is always a good choice! Coconut water and beer are always easy to find on the beach!! Besides that, is easy to find fish, shrimp and lobster at good prices on the beach.

KMT: What advice would you give to someone who is thinking about hosting a horn workshop or symposium?

RT: First of all, plan everything as early as possible!!! I believe that the idea of having symposia/horn workshops in different parts of the world is great and is good for the Symposium to have different kinds of performances. Therefore, I suggest that alongside the usual symposium activities, hosts should feature performances and activities from their own country or region – things that foreigners may never have seen before! The exchange of information is very enriching, and the purpose of going to another region/country is to learn different things as well!! To unite the traditional and the new can be very productive!!! We will be doing that here in Natal, and I believe it will be very exciting!!!

To all horn players around the world, come to Natal for the 49th IHS, from June 26-30th and I’m sure you won’t regret it!! You don’t want to miss this opportunity!

Radegundis Tavares obtained his Doctorate, Masters and BA in music from the Federal University of Paraíba (UFPB) under the guidance of Professor Cisneiro de Andrade (Horn) and Luis Ricardo Silva Queiroz (Music Education). He began studying the french horn at age 11 at the UFPB Music Extension Courses. Later, at age 12, he performed for the first time as soloist with the UFPB Youth Orchestra.

At the age of 15, Radegundis was granted the honorable mention award at the Sixth Weril Award, and debuted as a soloist at the Teatro Municipal de São Paulo, playing his own transcription of the Variations on "The Carnival of Venice" by Jean-Baptiste Arban.

At the age of 17, he performed as guest first french horn with the Paraiba Symphony Orchestra, a position he held until he was 19 years old, when he passed a public contest for the post of full-time professor of french horn at the Federal University of Rio Grande do Norte (UFRN).

Radegundis recorded two CDs, the first entitled "UNIVERSAL" and the second “Radegundis Tavares”. Since then he has worked as teacher, soloist and chamber musician in various major musical venues in Brazil.