The analogy as a pedagogical method for teaching the horn 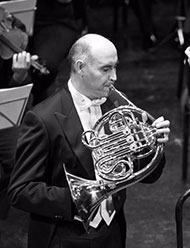 In my nearly thirty years as a professional horn player, and more than twenty as a teacher, I have often needed to create models on various aspects related to the interpretation, both for my own needs and to help my students.

As the way sound is produced by brass instruments is not obvious to the naked eye, unlike with string, keyboard or woodwind instruments, it has been useful to create analogies between them and the horn in various aspects (sound production, range, articulation, etc.) to understand and explain how it works.

I believe studying engineering has led me to try and find rational solutions to various problems, although I must say that my methods have always been empirical and never scientific, that is, my observations have not been made using laboratory equipment and instead they have come from my own feelings and those of my students.

Every student knows (or can be easily shown) the basic operation of a piano or of a violoncello:

In the first one, the hammers, driven by the keys, hit the strings, which are maintained at the required tension by a metal frame and pegs that hold them against the bridge. In the second one, almost everything is the same, except instead of hammers, hair in a bow is used, brushing against the strings which are held at the right tension, producing a vibration at the desired frequency. This initial vibration is amplified, in both cases, by a resonance chamber.

Although the type of vibration of our lips is physically quite different from the strings of violins, we can find many similarities between the ways vibration is produced. This will help us understand which parts of the process depend on which parts of our body, and what aspects will need to be practiced in order to get a clear, round and well projected sound:

Breathing and the resonance chamber

In the horn, one part of the resonance of the sound comes from the instrument and the other (often forgotten by students) is created within our own body, so a full breath with good support will create a greater resonance cavity and consequently give us a larger and more projected sound for a given amount of air used or equal vibration of our lips. This is especially necessary in the low register.

If we only fill up half of the capacity of our lungs, we will have approximately the size of the soundboard of a violin or viola, and this will not be enough to produce a big and round sound because, in the middle and low registers, we play in the range of the violoncello. Any student will understand this analogy realizing the difference in size of violins, violas and violoncellos, and the proportion between their size and the range they can play.

Another analogy is that between our use of energy and how an archer shoots. The latter must work hard to tighten the bowstring but very little when launching the arrow. If we work with a full breath, the air in our lungs will have higher pressure than that of the outside. As this air will try to get out of our body by itself, we won’t need to make an extra effort while blowing. This will give us a larger and more relaxed sound but involve, as in the case of the archer, conscious effort during inspiration. Finally, we will just need to channel this energy towards the instrument.

Any additional effort that we make at the time of playing, as well as unnecessary tensions that we unconsciously create in our body, will only serve to deteriorate the quality of our sound. The cleanest, clearest, most focused and most projected sound will be achieved with the most efficient use of our effort/energy.

In the piano and the violin, the strings are attached to a stable frame, made of iron or wood, that ensures that sound is predictable, that is to say, that every time we play the same key or play an open string (or without moving the finger from the fingerboard) we will get the same note. In the case of the horn, we will obtain this security and stability in pitch by keeping the muscles of the face still, replacing them the function of the bridge on a cello. However, because these muscles are not made of rigid materials such as wood or iron, nor were they initially designed for this purpose, we need to consciously practice until firmness and immobility is achieved.

This tension of the facial muscles must be prepared before starting any note, maintained throughout the duration of it and, also importantly, between the production of a note and the next one. This stability will provide both a good legato and a homogeneous articulation. To achieve this we will use some of the standard flexibility exercises, such as those by P. Farkas, D. Bourgue, K. Biehlig and W. Rider, among others. We must practice them looking for the availability to maintain proper facial tension while we play. This practice will provide us: more secure emissions, intonation stability, homogeneity in the sound and endurance for long work sessions.

This part of the process is provided, in string and keyboard instruments, by the designer and the manufacturer, but in brass instruments we need to be able to do it every time we play a single note.

However, we must understand that not every muscle of our face should be kept to the same tension, as a small part of them are those which produce vibration inside the mouthpiece. These ones need a more controlled and variable tension as they will create the frequency differences between the different notes.

In this case we can compare our upper lip, in which the vibration starts, with an oboe reed. If it were too hard we would need a lot of energy to start its vibration and, therefore, we would not be able to play at soft dynamics. If we scrape the reed correctly, making it more flexible and having less wood, much less air is needed to begin its vibration and therefore we can play at a lower volume.

Therefore we should understand the work of our facial muscles divided into three areas:

Another aspect not sufficiently studied is the importance of preparing an opening between the lips before any note is played: If we look at the tip of an oboe reed we can see a little gap between both sides, quite similar in size to the opening between our lips when we are producing a vibration. This is something that we can easily check with an embouchure visualizer.

If we ignore this preparation of our lips, the energy that we give the air to start the vibration of a note (usually called emission or attack), will initially be used not to produce the vibration but to set apart the lips. The result will be problematic for several reasons:

The solution I think is most satisfactory, that I use every day to play and, definitely, I recommend my students, in order to get better emissions, smoother legato and cleaner articulations, is to consciously create independence between the opening of the lips and the flow or not of air over them. Ergo, create a separation, like that between both parts of an oboe reed, before the air reaches the lips, and keep it until the next breath. If we do not do this we will get, in addition to the problems listed above, that the opening between our lips will depend on the amount of air flowing through them, making several things more difficult:

Efficiency and shape of the opening between the lips

I have already stated that the shape and size of the opening of the lip, viewed from the front, should be similar to that of an oboe reed, but it is also essential how this opening opens towards the interior of the mouth. As the lips must direct the air towards the central part of the upper lip, in which the vibration begins, forming a kind of cone that focuses and concentrates the air will became necessary.

If the opening is too small and cylindrical it will create a lot of resistance to the passage of air and an inefficient point of vibration. The sound will be thin and it will be difficult to play ff. Also, we will need a lot of effort when playing as we will be fighting with ourselves all the time.

If the aperture is conical, but opening outwards, the sound will be unfocused, unclear and unprojected, because the inner part of the lip (less tense than the outer one) will be producing the vibration. The air will be sent to the mouthpiece cup not focused but spread and we will also have too much resistance because of the “wall” the air will find from the inner part of the lips.

The solution that seems to me most effective for a comfortable and clean vibration involves the creation of an air passage between the lips of the correct size and shape. The size will change with the dynamics we want to play, but its shape shouldn’t. Unless we want a more metallic and aggressive sound, in which case we will narrow the passage, creating a greater resistance that, by forcing us to do a greater effort, will produce this type of sound.

ADVICE: Not every student needs all this information, but I think it is good to use it with those who do not get a good sound due to an incorrect balance of the forces of their mouth, and to improve the legato and articulation of most of them. We can compare the process of working our mouth with the time an oboist invests making reeds. He needs primarily to know the type of scraping of the reed which suits him best and, once found, he will need to repeat it regularly. It will be impossible for him to play well with a bad or broken reed.

Rodolfo Epelde is solo horn of the National Orchestra of Spain, horn teacher at Musikene (“Centro Superior de Música del País Vasco”) and assistant professor of Radovan Vlatkovic at the "Reina Sofía" School of Music in Madrid. He teaches regularly in young orchestras and conservatories in Spain and Europe (Hanns Eisler Musikhochschule Berlin, Codarts Rotterdam, RNCM Manchester, ESMAE Porto, University of Aveiro, Tchaykovsky Yekaterinburg Festival, Italian Brass Week). He has been a member of the jury of the international horn contest of the ARD 2016. He is also a Telecommunications Engineer from the “Universidad Politécnica de Madrid”.