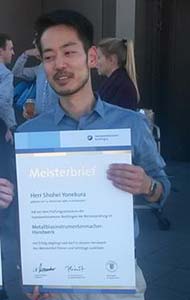 The other day, when I announced that I would open HMG, my own studio specializing in brass instrument repair and making instrument parts, I received an unexpected offer. It was to contribute an article about the opening of the studio and musical instrument manufacturing. I humbly accepted the offer, but then had to figure out what exactly I should write about. I thought it over and decided to make it about the source, explaining why I started learning musical instrument manufacturing and opened the studio.

I guess it was in 2005 or 2006, when Johannes (the Meister of Helmut Finke where I worked at the time) and I were driving on the Autobahn at night. I was in the passenger’s seat. We were heading home from something, but I do not recall if it was a concert or workshop. There was not much traffic, and the Autobahn that runs in the countryside is pitch-black, goes through the woods, passes the fields, and then goes into the woods again. Our beam of light pierced the vast darkness making me realize how anxious I would feel if our car suddenly broke down there.

We talked about everything including the job, vocational training school, the German language, and Japan. After a brief silence, I casually asked him a question: “By the way, why did the company hire me?” Looking back now, I realize it was a strange question and surely he must have been puzzled to have been asked it.

I was expecting a specific answer: “Because you are talented and showed high potential during the trial period." However, his actual answer was this: “Shohei, because you showed motivation. Besides, you are a good person.”

I thought, “Okay...motivation. So I was hired because I am good-natured.” I was not fully convinced and to be honest, was rather disappointed. After that, I completely forgot about this conversation for a while. It was only about a decade ago, but it feels like the distant past. I wonder if it means my last decade has been fulfilling.

Both my working life and private life have been exciting and thrilling. I've enjoyed tons of new things happening one after the other while also worrying, struggling, and going through hard times as well. To make a long story short, it was an emotional roller coaster. One day, I was on cloud nine, but the next day, I hit rock bottom. Though it is tough going through this, it has naturally become my way of life. Rather than being afraid of risks and becoming defensive, I chose to understand the risks, get prepared, and then give it a try. If I would describe it in baseball terms, I would swing on a full count, because a swinging strikeout is much better than a called strikeout. It's great when you nail it, but it's more miserable when you fail just watching. (Rest assured, the approach I take with my client's instruments is of course much different. I always handle them with great care). 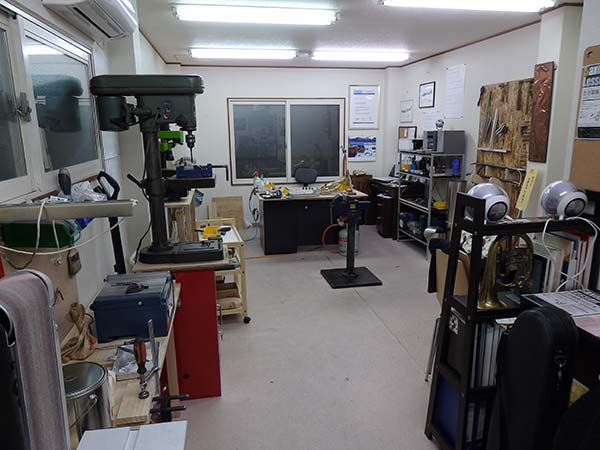 Sometimes, things were too absurd and hard to take, and I felt like giving everything up. However, I managed to pull myself together because of my motivation. My motivation is extremely fundamental and simple:  “Craftsmanship and Music.” These are my two biggest pleasures. They are unlimited and will never dry up. This motivation is the fountainhead that has pushed me to this very day. It has allowed me to enjoy experiencing things that other people would not even try. Speaking of motivation, this kind of motivation (motive in life) and the other motivation (eagerness to work), which Johannes spoke of when describing me in the car, have a slightly different meaning, but they come from the same source.

The meaning of the name HMG comes from “Community by Craftsmanship and Music.” HMG is an abbreviation of the German words “Handwerks- und Musikgemeinschaft.” To be precise, “Handwerk” means manual industry or handwork, and HMG’s primary business at this point is repairing brass instruments and making instrument parts. However, becoming a manufacturer is the company’s long-term plan, so I thought that translating the German word as “craftsmanship” suits my company best.

Due to my nature of thinking that everything comes from a source, I always try to remember when, where, and how my motivation originated.

I guess it happened when I was in early elementary school. My father took my two-year-older brother and me to a hobby shop. My father bought my brother a model Lamborghini Countach and bought me a Ferrari F40. Those were the first models we ever got. We built them without painting, but for some reason my father painted my brother’s Lamborghini body only in dark blue. It made his model look far superior, and I remember feeling jealous. While my brother did not show much interest in models, I really loved it and became a “model boy” since that day. I managed to build them however awkwardly, but painting was too difficult for me to do by myself. Every night after dinner, I used to grab the model workbox, go to Father’s side, and beg him to paint it. He was known to have a few drinks with dinner, so I wonder how he felt when I was at his side pestering him to hurry up. In his room, I would sit right next to him staring at his hands as he painted my car. During the time, we hardly talked, and the room was silent. I now have a son in the second grade, so I can imagine that my father must have felt happy.

It was not long before I learned how to paint and started making things by myself. I had always made random things in my spare time until I found my path in wind instrument repair. I don't know why, but I stopped building models when I started studying repair. I imagine it's because I like doing work with my hands and repairs that satisfied that desire to build models. The world of instrument repair is profound, and it is an endless quest. Deep in my heart I feel that my fascination for producing things traces back to the indescribable joy and pleasure of “craft” when I was immersed in building models as a boy.

So where did my motivation for music come from?

I met music, especially wind instruments, at a brass band club in junior high school. They gave a performance at the club introduction for new students. I love it! I joined the club right away and devoted myself to the club until I graduated from high school. I haven't done much playing in recent years, but music appreciation is my biggest hobby. Needless to say, I experienced joy and pleasure of playing music as a student. Recently when I listen to music, I am often greatly moved by parts that in the past I would have barely felt anything for, probably because I am older. Among the various genres of music I listen to, classical music especially makes me feel that unknown territory, vastly spreading out in front of me as if it were boundless. The forest of classical music is deep. There is always music that moves you for the first time, but the depth of classical music is immeasurable, you can always find new parts in that music in which to enshroud yourself. Another great aspect is that just one piece alone will always have new exciting interpretations and fine performances. That is an unlimited pleasure.

These two motivations naturally sprung like spring water and fascinated me. They made me walk toward "a musical instrument craftsman", a dream job that is a harmony of craftsmanship and music.

As I wrote earlier, I tend to think of things from a source, and I am sincere about what I do. Although there are various ways to look at it religiously, I personally believe we only live once. You have many opportunities, but you will never have the same opportunity again. Staying true to myself in this regard has made who I am now.

Before I conclude, let me talk about horns a little bit. I love the Vienna horn, and I especially love the music of Mahler and Brahms. That may be why I cannot ignore the existence of the conspicuous Vienna horn. There are probably many fans of the instrument itself, so I'd rather not talk about its charm here. Instead, I would like to incorporate the essence of this admirable coelacanth into my instruments in the future.

Horns have very beautiful tone colors, and I think it is only natural to chase after them. However, I also feel that horn players tend to be overly obsessed with them. Even though there is no doubt that tone colors are one significant element in playing music, it does not mean that the tone colors themselves are equal to music.

I once attended a recital when a distinguished horn player came to Japan. I had the player’s CDs and used to listen to them as my favorite discs. The recital started with beautiful tone colors, and the player demonstrated excellent stability and created beautifully uniform tone colors on this difficult-to-play instrument. However, believe it or not, I fell asleep. I think this actually happened because I was bored rather than because I was feeling comfortable and relaxed.

If you study acoustics a little bit, you will learn that a feature of brass instruments is how the high-order harmonics increase as you play from pp to ff. Thus, the tone quality changes with its volume. Making full use of this feature, you can shade within a phrase and express vivid musical scene changes. From this point of view, the Vienna horn has an enormous advantage. Unfortunately, I have never seen data such as “The Change of Component and Volume of Harmonics Caused by Increase and Decrease of the Sound Volume of Vienna Horns” in numbers or graphs, so I cannot definitively conclude this. But based on the sound, I can easily imagine that the component and volume of harmonics change proportionately with the increase and decrease of the sound volume.

If I say that this is the charm of the F-Horn, the B-Horn’s bright sound is another great charm. Today, the double horns with both F and B keys are getting more and more popular, and those two keys with two distinctive characteristics tend to be put together in one when it is possible. It is realistic in a way, but when you think of it, it is a shame to do it. If HMG manages to manufacture musical instruments in the future, I will try to craft my first horn to make the most of having two keys. That is my view at this time.

Lastly, I deeply appreciate Mr. Nobuaki Fukukawa who gave me this opportunity.