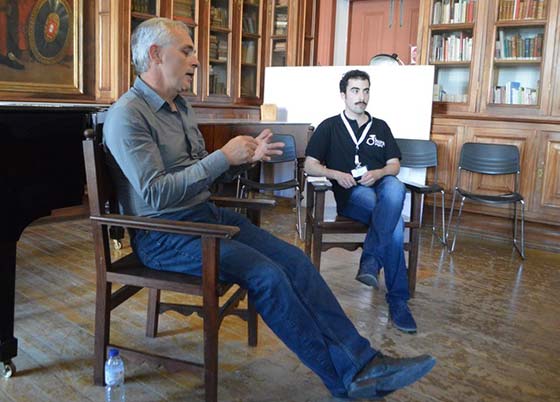 João Gaspar and his horn quartet were organizing a horn workshop. He wanted me to do an interview talking about my 30 years in the Gulbenkian Orchestra, teaching for 26 years in the Escola da Música Lisboa (ESML), and my life in Portugal. It was filmed and recorded, and an article came out in a Portuguese magazine. I'm not sure how my Portuguese was as I was suffering a little from jet lag (I’d just returned from China, on my last big Gulbenkian tour).

After the general introductions, the interview started with João asking me why I'd come to Portugal to play for Gulbenkian. I explained that I had seen an ad in the Saturday Telegraph and had auditioned in London. I was not the first choice - that accolade went to Andy Antcliffe, now in the BBC. He didn't take the job, so they rang me. After some negotiating and doing 3 weeks here and there with the Gulbenkian Orchestra, I decided it was the job I wanted. The Orchestra was at that point only a chamber orchestra. Over the next 5 or 6 years, they started to play an ever-larger repertoire. I insisted on having 4 horns. They accepted, but we never got the 5th horn, even though our repertoire needed one.

Then we spoke about teaching and the legacy I was leaving in Portugal. I was honest and said that when I first came to Portugal, the general horn playing level was not what it is now. There were some good players, but they were few and far between. I'm a firm believer that beginners need the best teacher. It's quite easy to motivate students at University level, and if they arrive with their technique sorted out it makes teaching them easy. In my first few years, I taught at various Professional Schools (6th-12th grade) before starting at the ESML. Quite a lot of my ex-pupils were at this workshop. Paulo Guerreiro, (principal in OSP; also playing the Sao Carlos Opera), said that Bohdan Sebastik and myself were responsible for players such as Abel Pereira, Jose Bernardo Silva, Filipe Abreu and Paulo (and of course others). These wonderful players go on to teach, thus raising the level. The younger students take inspiration from their peers, and so the cycle goes on. I congratulated Paulo on taking over my position at the ESML and continuing to produce wonderful players like Ana Beatriz Menezes. 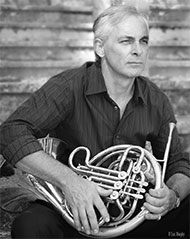 João then asked me what my greatest moment was in the orchestra. This is always a difficult question for any of us. After much deliberation, I said I think my proudest moment was playing the Penderecki Horn concerto with the composer in the Gulbenkian. It was such a great piece and an honor to be directed by him. This was the Portuguese premiere and I think only the second time it was ever played.

Lastly we spoke about why I was leaving. I replied that after 30 years as principal, I felt it was time; my generous contract with the Gulbenkian allowed it. Besides, my wife had retired a few years earlier, and we had bought some land that I wanted to work on. I also explained that for the last year or so, everyone knew I was retiring; more importantly, it was my decision, and I was happy with it. It wasn't forced on me, quite the contrary. Gulbenkian asked me to stay on. Paulo G also spoke up to say that playing 30 years as Principal horn can be quite stressful. The interview ended with questions:

Finally I was asked if I would continue to play the horn. Answer-- an emphatic No!

Why? Of course was the response. This was and continues to be something that people find hard to fathom. Having played from an early age until 55 (about 43 years), why would I suddenly stop playing? My answer is always if wanted to carry on playing I would have stayed in the orchestra. I don't want to have to practice daily to keep myself at my top level. I have loads of other things to do. Build: horse stables, yoga decks, raised beds, to name a few. And if I picked up the horn now it would sound awful.