This month, our feature for “Meet Your Maker” is Indiana-based horn builder Darin Sorley. We hope you enjoy this look behind the scenes of a one-person horn shop!

Andrew Pelletier: What brought you to the horn? What is your horn back-story? 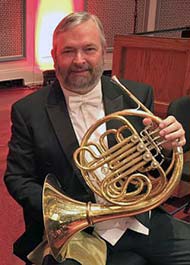 Darin Sorley: I began playing the horn at age 12 in the public school system in Indianapolis, Indiana. My older brother had played the horn a bit, so I knew how to get a sound out of it. My brother’s horn was also the beginning of my repair career starting with the bending back of the bell after one of us tripped over it. I was lucky in that the Junior High School I attended had a repair room and the band director allowed me to do basic maintenance on some of the school instruments, which sparked my interest in how things worked.

I do not have the “typical” career path of most horn makers in that I began my career as a band director. I attended Butler University and received a Bachelor Degree in Music Education and most importantly, met my wife of 30 years, Rebecca. I then taught instrumental music in grades 5-12 for the next 3 years in Indiana. During that time, I started taking lessons with Philip Farkas at his home in Bloomington in order to begin auditions for my master degree in horn. I was accepted into the Cleveland Institute of Music and began studies with Richard Solis, and after a wonderful two years at CIM and attending Cleveland Orchestra concerts, I received my Master Degree in Horn Performance.

After Cleveland, I returned to Indiana to teach for four more years before pursuing my Doctorate degree at Indiana University where I studied with Michael Hatfield. While at IU, I studied natural horn with Rick Seraphinoff, which eventually lead to my horn-building career. It was three years after finishing my course work at IU, teaching at the University of Evansville and then a one-year position at Southwest Missouri State, that I began my horn-building career.

After moving back from Missouri to Indiana, I started my freelance-playing career in the Indianapolis area. I had always had an interest in building a horn so I contacted the only person I knew doing it...Rick Seraphinoff. During the summer of 2000, I built my first (and only) natural horn, 3 crooks and 2 couplers all under the guidance of Rick. I like to tell everyone, that during that summer, I built my one horn and Rick made six!

AP: How did building/customization come into your life?

DS: After building my natural horn, I began to collect tools, etc., and doing simple repairs on school instruments to hone my skills before getting into working on professional horns. After 3 years, I decided that I wanted to build a double horn for myself and sought the guidance of Rick again. Seraphinoff set me up with a valve maker and bell maker in Germany and helped me with the language barrier, etc. I am indebted to Rick a lot, especially since I know I wore out my welcome from time to time with all of the questions.

AP: Are there any builders that are major influences/inspirations for you?

DS: Growing up in Indianapolis, the Chicago style of playing was always present, as most of my teachers studied with members of the Chicago Symphony and played horns made by Carl Geyer. I appreciated the fact that every horn was made for the individual player who ordered it and that each horn, though similar in style, was different aesthetically. The idea of having a horn made personally for you instead of a “one horn fits all” concept was appealing to me and it is something that I strive to do in my own business. 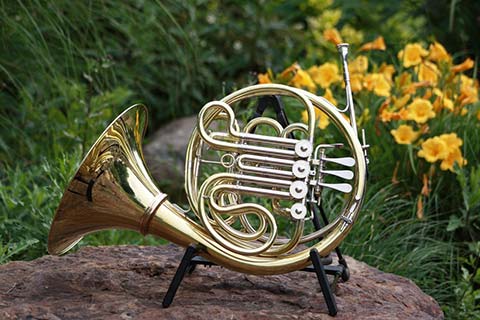 AP: Do you also do repair work, besides building?

DS: I do repairs primarily on horns, but also work on trumpets and other brass instruments to a degree. I have an ultrasonic cleaner which I use in both the manufacturing and repair side of the business. About the only things I don’t do are valve re-plating and lacquering, only because it would take away from my horn building due to the time involvement.

DS: I feel that being able to “play test” my horns is very important as a builder, and my still being active in the music scene allows me to do this. I have been known to take a horn I’ve built into rehearsals, recording sessions, etc. to get a sense of how the horn plays in various situations prior to giving it to the customer. For me, only playing a few test notes is not enough to tell if the instrument is set up properly, so I do several days of testing before the final cleaning to insure the customer is getting what they paid for, but more importantly until I am satisfied with the results.

Since making the first horn for myself (I recently made another), I feel that my playing did improve. I had been playing a 1930’s Geyer that was made for Philip Farkas, but was a bit worn out. I wanted something that was easier to play and centered the notes better, so that was the main reason for my building a horn which lead to my gaining confidence in what I could do when performing. As any good builder, I am always looking for ways to “tweak” the product and my being able to still play well on the horn allows me to know what works and what doesn’t.

DS: Early on before I built my new shop, I use to do all of the buffing outside. Buffing without a doubt the thing I dislike the most about horn building because after working for hours, days or weeks on a part, the buffing wheel can destroy it in an instant. I was outside buffing the 3rd valve F crook and took my attention away for a second. I think it flew about 8 feet before hitting the tree. Needless to say, I had to make another crook!

AP: Thanks very much for this look into your background and work, Darin!

DS: My pleasure. Thanks for asking!