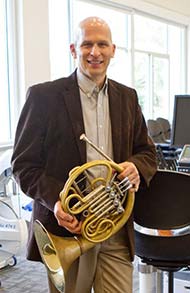 For many years, horn players and teachers have been interested in studying the physical phenomena associated with their art. Much has been written regarding breathing, formation of the embouchure, playing posture, and even hand position in the bell. Commentary regarding these physical manifestations is commonly based upon what can be externally observed, and much can be learned in this way, particularly from those elite performers who have become masters of their instruments. Philp Farkas’ photographic study of the embouchures of virtuoso horn players immediately comes to mind. As a young student I spent many hours on those revered pages.

An area, however, that has been shrouded in mystery concerns the many movements that occur inside the airways and oral cavities of fine horn players. A quick perusal of the available literature will reveal many different points of view regarding playing mechanics, particularly in reference to tonguing, tongue position during sustained and changing notes, oral cavity configuration when playing different dynamic levels, movements of the larynx, and even control of the glottis. At best, the savvy artist/teacher will develop a set of guiding principles based upon their own kinesthetic perception; principles that they believe allow them to have success. The ensuing logic is obvious: if great performers believe that they do things a certain way, then their opinions must be valid, and ought to be replicated in students. But what happens when great performers believe different things about what they do, particularly in regard to the inner workings of the mouth and throat?

Real-time magnetic resonance imaging (RT-MRI) provides a tool that promises to lift the veil of uncertainty that obscures our understanding. Since the fall of 2013, it has been my distinct privilege to give impetus and direction to a series of studies being conducted at the Max Planck Institute for Biophysical Chemistry in Göttingen, Germany in collaboration with The Institute for Music Physiology and Musician’s Medicine, Hannover, Germany. For the first time, we are able to safely and systematically study movements inside airways and oral cavities of brass performers by recording movies utilizing this new technology.

Over the past 2.5 years, our work has provided advancements that include dynamic, quantitative measurements of oral cavity movement, the fastest acquisition rates yet published (100 frames/sec) allowing us to study extremely fast movements like double tonguing, and the first comparative studies of elite horn players and horn players with the movement disorder, embouchure dystonia (EmD). These comparative studies provide vital insight into the nature of EmD by elucidating the inefficient and aberrant movement strategies used by EmD patients in comparison to elite performers. Further, by studying elite performers, we are able to make unbiased, objective measurements that will doubtless prove to be vital for those interested in horn and brass pedagogy. Notable among our elite subjects have been members of the Berlin Philharmonic, Marie-Luise Neunecker, and even former IHS President, Jeff Nelsen of the Jacobs School of Music, Indiana University. 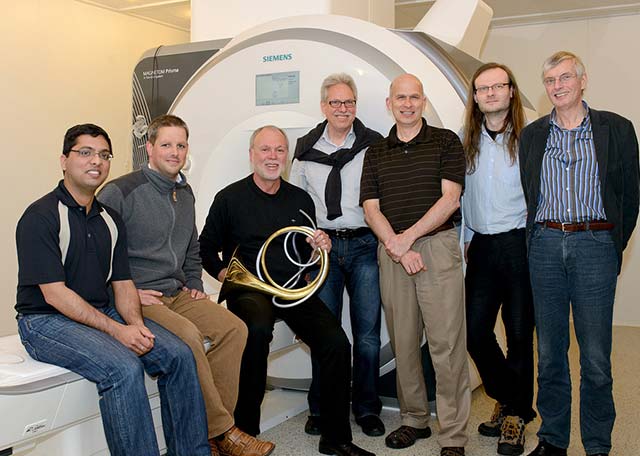 There have been quite a number of other developments coming from these MRI horn studies. Certainly, one of the most viral YouTube products to hit the horn world in years consists of the RT-MRI videos of the Berlin Philharmonic’s Sarah Willis that were produced in April of 2015 during our filming of an episode featuring the MRI research for her program, Sarah’s Music: Music and Science. At over 286,000 hits, those videos have been the source of much excited conversation, and the MRI segment from Sarah’s Music has been viewed around the world. But beyond these popular formats, five scientific papers have been produced from the work thus far. And for two consecutive years, this MRI work has been featured at the International Horn Symposium (Los Angeles, summer of 2015, Ithaca, summer of 2016). Additionally, a YouTube site has been developed entitled, MRI Horn Videos: Pedagogy Informed by Science. This site was a project that I undertook last year along with my friend and colleague, Eli Epstein (former 2nd horn in the Cleveland Orchestra, currently on the faculty of New England Conservatory and The Boston Conservatory at Berklee, and one of our elite subjects in Germany). In fact, Eli’s latest edition of his highly-rated book, Horn Playing from the Inside Out features a generous treatment of the MRI horn work, and has just become available.

What does the future hold for this work? Quite frankly, we have only scratched the surface of what we can learn using RT-MRI technology. My colleagues in Germany and I have only begun to extend this technology to its full potential. Last summer, Dr. Jens Frahm, Director of Biomedical NMR Research at the Max Planck Institute in Göttingen, and I proposed an ambitious project to be conducted over the next several years. We have called the project the MRI Horn Repository Project (MHRP). The primary aim of the MHRP is to substantially expand the scope of our study in so that we might:

Dr. Frahm’s laboratory has led the way in RT-MRI research, particularly with respect to high-speed acquisition rates that retain high-quality spatial resolution. Further, to our knowledge, his is also the only lab to have accomplished simultaneous multi-plane acquisition using RT-MRI, and the first to provide simultaneous visual feedback to subjects in the scanner. The MHRP provides Dr. Frahm with an outlet for the practical application of his amazing data acquisition techniques, and the collaboration thus far has been extraordinary.

Of course, a project of this scope requires significant funding to offset the considerable costs that are incurred. The budget for 2016-2017 alone is approximately $57,000.00, but our hope is that we can raise a very significant grass roots base of support from those in the brass and horn world who can see the potential for this work. Not only do we hope to provide information for teachers and students about pedagogy, but we also hope to provide a vital data source for doctors and researchers interested in ameliorating potentially career-ending movement disorders like embouchure dystonia.

Two significant testing sessions at the Max Planck Institute in Göttingen are planned for the next calendar year (January 2017-January 2018). During each 10-day session, 12 elite horn players from significant European and American Orchestras will be recruited for scanning.

The MHRP’s tentative schedule is as follows:

Of course, if you would like to be involved in this project by helping to support the financial burden of this research, we would be most grateful. Every donation counts! We have a web site established at Gordon College that will provide more information about our work, links to important products of our research, as well as a direct link for making a monetary contribution to the MHRP. The link is: http://www.gordon.edu/mrihorn

Peter Iltis is Professor of Kinesiology and former professor of horn at Gordon College, in Wenham, MA.  In addition to his teaching responsibilities at Gordon, Iltis has been directing research in Göttingen, Germany at the Max Planck Institute for Biophysical Chemistry using real-time magnetic resonance imaging in both elite horn players and in horn players with various movement disorders such as embouchure dystonia.